When Annalise Keating first approached Olivia Pope in that university lecture hall, she was doing so to get help with her class-action lawsuit — and if you glimpsed the title of Thursday’s How to Get Away With Murder episode, “Lahey v. Commonwealth of Pennsylvania,” then you already knew that Annalise and Olivia succeeded in getting their case heard by the U.S. Supreme Court.

But, as evidenced by the second hour of Murder‘s crossover with Scandal, getting inside that courtroom was only half the battle for these two women — and the other half was even messier, featuring some plot twists that not even Olivia could fix.

Before you give us your thoughts on Part 2 of this major #TGIT event, here’s what went down in the second episode (and you can head over here for a full recap of the Scandal hour):

Once her case is accepted by the Supreme Court, Annalise spends the next few days preparing her remarks, all the while navigating curveballs both personal (her ailing mother arriving in D.C. to cheer her on) and professional (Olivia discovering that Nate Lahey Sr., aka the face case for this entire lawsuit, is also the father of Annalise’s ex-boyfriend).

But the biggest shock of all comes from Jacqueline Roa, who calls Annalise literally minutes before she’s supposed to appear in the courtroom and informs her that Isaac overdosed. He’s still alive, but his kidneys are failing, and Jacqueline immediately places the blame on Annalise. If Annalise hadn’t gotten involved with the story of Stella’s death, she says, Isaac would never have returned to such a dark place. And just like that, all of Annalise’s preparation for her day in court goes out the window, as Jacqueline’s jarring phone call sends her spiraling into a panic attack — and not just about Isaac. She’s also freaked out that she’s going to fail in front of the justices, and she knows full well that losing this case will set criminal justice reform back a few decades, give or take.

Fortunately, Olivia is there to do what she does best: handle things. She gives Annalise a pep talk, even presenting her with the opportunity to drink vodka in order to calm her nerves, but Annalise manages to pull herself together without falling off the wagon. Her next obstacle, then, is the justices, who interrupt her not two minutes into her opening statements and try to undermine the very goal of her lawsuit. They grill her about how, in fact, Nate Lahey Sr. could possibly be considered a “victim” when he was the one who murdered a fellow inmate. And, for that matter, is Annalise arguing that the criminal justice system has a race problem? Or a funding problem? Ugh, Sophie’s choice! 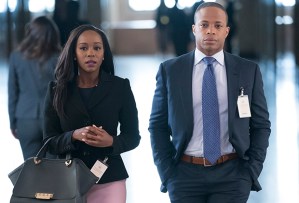 In the end, Annalise argues that it is a race problem, above all else, that is hurting her several-dozen plaintiffs — and she uses a justice’s own words against him, pulling from a previous Supreme Court ruling in which he said race is indeed a factor that is crippling the justice system. (Would it be overkill to insert the entire transcript of Annalise’s episode-ending monologue here, because it was so moving? Asking for a friend.)

No decision is made on the case before the episode ends, but Olivia gets word from Fitz that the justices could very well rule in Annalise’s favor. “We did good,” she tells Annalise. “Take care of yourself.” But considering the phone call that Annalise gets after parting ways with Olivia, self-care will be a bit difficult: It’s Bonnie calling from the hospital, where Simon has just woken up.

* After refusing to kiss Marcus during the Scandal hour, maintaining that she loves Asher “very much,” Michaela eventually gives in to the temptation and has sex with Marcus in the front seat of his car. Laurel and Connor pick up on Michaela’s infidelity immediately, and Michaela begs her friends not to tell Asher that she cheated — but by the end of the hour, Asher seems to have picked up on the chemistry a bit, too.

* Even though Michaela was her right-hand woman during the entire trip to D.C., Annalise singles out Connor during a post-court press conference as the student who helped her most with her class-action suit.

* Frank finally learns why Laurel’s mother had met with Wes all those months ago: Sandrine apparently gave Wes $100,000 to stay away from Laurel, despite Laurel’s talk of being in love with him. But Bonnie does some digging into Wes’ old bank accounts and fails to find the dough, prompting Frank to search Wes’ apartment for a hiding place where the money might still be kept. Under a few loose floorboards, he finds a USB flash drive — and when he plays it for Laurel, she hears crystal-clear audio of her mother’s secret meeting with Wes.

And with that, #TGIT’s much-hyped crossover has come and gone. What did you think of the HTGAWM hour? Grade the episode in our poll below, then hit the comments with your thoughts!