“Ms. Pope, our country is in crisis. Together, we can fix it.”

These are the words Annalise used to woo Olivia atop Thursday’s Scandal/How to Get Away With Murder crossover, though it was clear Ms. Keating knew not how ironic a statement it was, nor that she was speaking directly to someone responsible for so many crises herself. 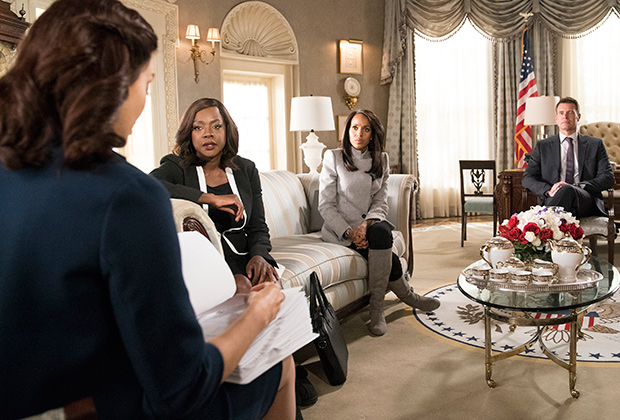 Olivia was eventually convinced to help Annalise with her class-action lawsuit after a chat with Marcus — a huge Annalise Keating fan, apparently — who reminded a skeptical Liv that Annalise “has been accused of some things. But haven’t we all?”

And while I applaud Marcus’ effort to draw parallels, I’d like to remind him that Olivia wasn’t just “accused” of things. She killed someone. Several someones, in fact. And she’s gotten away with all of it. (Wait, maybe she and Annalise are more like than I realized.)

Despite being on the outs with Olivia romantically — or even as a friend, it seems — Fitz was still willing to lend her a hand, mostly because she reminded him that his mission is still to help “people in this country who are punished because of disadvantages they were bon into.” With their powers combined, they got Annalise all the way to the Oval Office… where Mellie shot her request down faster than Fitz shot down Mama Pope’s plane all those years ago. 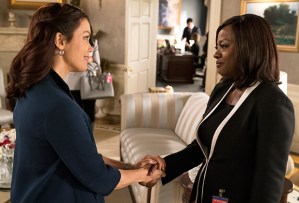 Hurricane Mellie inflicted further damage by leaking news of Olivia’s firing (via Quinn) to the media, leading to an epic — not to mention highly quotable — showdown between Liv and Annalise at the damn salon of all places. Upon learning that Olivia was booted from the White House, Annalise accused her of hiding the truth and sinking the case, which lit a fire under Liv. “Your skin tone and your measurements aren’t the reason people don’t like you,” she said. “It’s you. You’re a bully, Annalise.” Liv even threw shade at her for traveling from Philly to D.C. on a Megabus. (Rude.)

Fortunately, the two ended up back on the same side — and swapping banter about Olivia’s love of popcorn and wine — by the end of the crossover’s first hour. Furthermore, Quinn helped Olivia get Annalise’s case to the Supreme Court by revealing that QPA had dirt on one of the judges. All Liv had to do was make that dirt go away… and is there anything she’s more qualified to do?

Following an almost-kiss between Michaela and Marcus (as I hoped/predicted), Liv and Annalise decided to extend their partnership to see this case all the way through… to Thursday’s episode of How to Get Away With Murder.

Your thoughts on the first half of the Scandal/HTGAWM crossover? Grade it below, then drop a comment with your full review.