We think The Thinker might be having unforeseen marital problems.

As The CW’s The Flash resumes Season 4 this Tuesday at 8/7c, Barry’s latest Big Bad has adopted yet another form, that of “unlucky” bus meta Becky Sharpe.  But in the course of doing so, Clifford DeVoe got a bit kill-y, needlessly offing the Iron Heights warden. That raised the hackles of his wife and partner Marlize, to the point that DeVoe is now dosing his better half with Weeper tears.

TVLine invited South African actress Kim Engelbrecht to survey the state of the DeVoes’ union, weigh in on the latest body swap and share the secrets behind her quick-changing mane.

TVLINE | I was thinking that if you’re from Cape Town, and looking the way you do, you probably went up for Syfy’s Blood Drive (which wound up starring Valor‘s Christina Ochoa).
I did! I did audition for Blood Drive. I think everybody in Cape Town auditioned for Blood Drive, the whole of Cape Town. [Laughs] That’s what happens when TV shows come to Cape Town, and that’s why I got Dominion as well. It’s beautiful there. 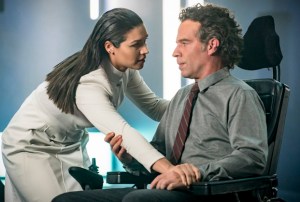 TVLINE | When last we tuned into The Flash, Ralph had wheeled himself into the courtroom looking like the original DeVoe (played by Neil Sandilands), to get Barry off on the murder charge. Why in your mind did Marlize not say anything? We she privately happy to see Team Flash get a win, or was she being pragmatic in not wanting to implicate herself in the frame job?
No. 1, she was not party to [Team Flash’s] plan at all, she had no idea what was going on. She was completely blindsided. Also, I think those are the little human moments for her which make her so interesting, which makes Marlize so human. because it’s just her seeing her husband! Like, “Oh my gosh, it’s you! And I just want to look at you for a bit longer!” Those are the lovely little nuances that I enjoy about her. It was not about the plan in that moment, it was just about seeing him.

TVLINE | So, she was legitimately gobsmacked.
Legitimately, and maybe just wanting to jump out of her chair and hold him.

TVLINE | One of the things you do effectively communicate is that she misses seeing the Clifford she fell in love with.
Yes! She just wants to see him. In Episode 7 (the flashback-heavy “Therefore I Am”), you see that there’s this relationship between these two people doing their own thing but kind of in the same realm. His dream becomes her dream, and like anybody who’s been pulled into a new fold, you start taking on the responsibility of somebody else and it becomes your responsibility. That interplay between the two of them was incredible. Everything that he thought of is now becoming her mission and her goal — even stronger than his.

TVLINE | Speaking of this “dream,” are we going to get a greater sense of DeVoe’s end game, his grand plan?
Well, in “Therefore I Am” we kind of saw that he wanted to make people more aware of what was going on. He wanted them to use their minds more. People are stuck in their own little cycle, their own little world, and his aim is to make people aware of humanity and save humanity.

TVLINE | Because in the last, we saw him suck the minds out of the bus metas…. So I’m wondering what he’s “building” here.
I don’t know what the ultimate goal is. What I do know is that the bus metas are really important to his grander scheme. He needs those certain skills to accomplish what it is he wants to accomplish, so he’s slowly weeding them out. It’s a bit of a mystery, like playing a game of Clue with DeVoe. The audience only has pieces of the puzzle that they have to put together. 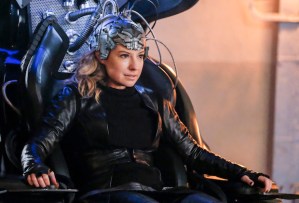 TVLINE | Marlize seems to be growing tentative about things, pulling back from Clifford a bit in recent episodes. How would you saw that her perspective on their plan has evolved since he started body swapping?
I’ve always seen Marlize as a bit of a soldier, with that same soldier mentality where good people do horrible things in service of a beautiful ending, basically. I see her as a loyal lieutenant to him, other than being a wife. It’s almost like a doctor taking the Hippocratic Oath, and as a scientist, she’s got a problem and she needs to solve it. There’s also that going on with her, that sense of professionalism and duty.

TVLINE | But isn’t she starting to disagree with his methods?
Definitely, because she’s a human being! She’s a wife, and most females are nurturing, so the little battle inside of her is like, “Am I doing the right thing? Or do I do what I’m supposed to do?” It’s definitely playing on her. You can see it in her eyes in the last episode where the warden was killed. It was like, “What?!” In my mind, they discuss everything. They have a plan, and they methodically work through it. That’s the way she works — tell me what I need to do, and we’re going to go from Point 1 to Point 5. I’m with you every step of the way.

TVLINE | And now she’s like, “You’re starting to go off script, baby!”
She is completely blindsided, like, “What was that? What kind of creature are you? Why are you doing this?”

TVLINE | What new wrinkles come with DeVoe now inhabiting Becky (Sugar Lyn Beard)?
The timing is impeccable, because she is using The Weeper’s tears. The ultimate goal is positive in both of their minds, so her using the tears is a bit warped. But the tears are actually necessary, because I think Marlize would otherwise completely pull out of the whole grand scheme. If [Becky] wasnt using the tears, I don’t think Marlize would stick around for too long. I’m interested to see how far he goes.

TVLINE | Do you think that Marlize has been having “relations” with Clifford during his two body swaps?
I think definitely, yeah! I mean, your husband’s back! Your husband is back. And whatever you saw in Episode 7, I think that continues. They’re together, so definitely.

TVLINE | So even thought he’s now a female, “Don’t knock it until you’ve tried it”?
[Laughs] I think so, yeah! I think they’re having a happy life. 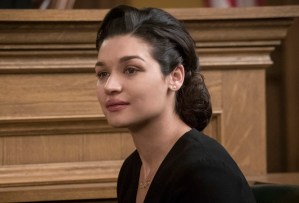 TVLINE | We see Marlize effortlessly bopping back and forth between soft curls and her slicked-back mane, seemingly in a matter of minutes. But how long does it take Kim to go through that transformation?
[Laughs] I’m so happy you asked that, because I love my hairdos, they’re so amazing. When she slicks her hair back, I’ve got to blow-dry my hair — and I’ve got really curly hair, so that’s a mission in its own! — and then they probably use three containers of gel on my hair, and a slicking oil…. And they make sure that it’s perfect all the time. And then when my hair is in curls, it has to be rewashed again because it’s full of product, and then they give me little pin curls, which I leave in for the whole day until I shoot. It’s a process of about an hour, and then just maintaining [until shoot time].

TVLINE | So even though Marlize seems to switch it up in the course of running downstairs, in reality she has a whole hair and makeup team there in the secret lair.
For sure! For sure.