This week on The Good Doctor, Shaun and the rest of the St. Bonaventure staff attended the hospital’s annual fundraising gala — but not before two of the residents watched a man shoot himself in the face.

One of the aforementioned eyewitnesses was Alex Park (Hawaii Five-0 alum Will Yun Lee), another one of Coyle’s orphaned residents — a 45-year-old former cop who made the transition to medicine after 15 years on the force. He, along with Jared and Claire, oversaw the case of a young boy named Eric in need of his second liver transplant. Claire expanded the search beyond the official transplant list, and found an independent donor online… who just so happened to be an imprisoned Russian hitman named Boris. (Yeah, that took a turn!)

Eric’s parents agreed to accept Boris’ liver, but when the inmate was brought in for the procedure, he suffered an immediate allergic reaction to the anesthesia and the surgery was called off. After getting ahold of a guard’s firearm on his transport back to the prison van, Boris took his own life in front of Claire (who tried to talk him down) and Alex (who pretty much told him to do it), freeing up his liver for Eric. In doing so, the doctors were also able to salvage other organs and save multiple lives. 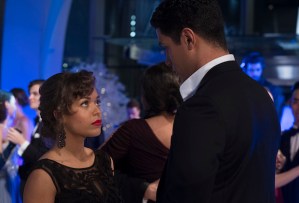 Later, Jared and Claire took their relationship public by attending the gala as a couple. Suffice it to say, “going public” wasn’t necessary given what happened next. On the dance floor, Jared got upset with Claire after she couldn’t remember the song that played when they first kissed. She blamed her forgetfulness on having a long day (I personally would’ve said, “A man just shot himself in front of me, and I do not need this kind of pressure right now!”), but Jared took it to mean that she didn’t love him and broke up with her. Just like that.

Shaun and Reznick, meanwhile, worked on a teenage girl named Spirit. The 14-year-old was born with ectopia cordis, which is another way of saying she had an abnormally located heart. (In her case, the organ was in her abdomen.) The doctors feared they wouldn’t be able to surgically relocate the heart after learning it was enlarged, but Reznick knew of an experimental procedure (there’s always an experimental procedure, isn’t there?) that would allow them to proceed by implanting an artificial sternum to expand her rib cage. The surgery was ultimately a success. 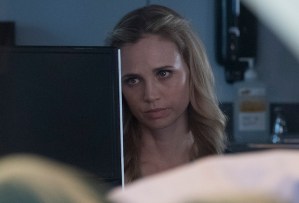 This particular Case of the Week was less engaging than the interaction between the doctors. Reznick spent much of the episode trying to help Shaun in her own misguided way, advising him to go out an buy an expensive tux for the gala. (Despite Andrews suggesting that he ignore Reznick, Shaun shelled out $2,368, to be exact.) And just when it seemed like perhaps she wasn’t a total garbage person, she went ahead and implied that his autism was impeding his judgement when he expressed doubt about the artificial sternum to Dr. Lim. Later during the procedure, Reznick also came right out and said she didn’t respect her fellow resident, which was rude, but not surprising coming from this particular know-it-all. (Say what you will about the character, but portrayer Fiona Gubelmann is doing a terrific job making us hate her.)

* Anyone else get a weird vibe from Dr. Park? First he went through the patient’s personal belongings. Later he pretty much told Boris to go ahead and pull the trigger. There has to be more to his backstory…

* I still haven’t forgiven the writers for having Lea ask Shaun if he’s a good doctor (I don’t care if it was rhetorical. It was awful and you know it!), but I was happy to see that she’s keeping in touch and sending him more music. Seriously bud, you can’t just watch The Weather Channel for entertainment! 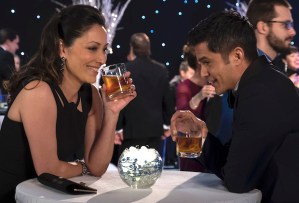 * It’s only a matter of time before these two (see photo) start hooking up, right?

* Can’t say I’m nearly as invested in whatever Aoki’s got going on with that Aiden fellow. For a series regular, Tamlyn Tomita has had very little screen time.

What did you think of “Heartfelt”? Drop a comment below with your reactions to the episode.