Is The Good Doctor scrubbing out?!

That was the question for much of Monday’s episode, which began with Shaun giving Glassman his two weeks notice. He no sooner asked Melendez for a letter of recommendation to transfer his residency to Penn State Medical Center. This was influenced by his desire to stay close to Lea, who last week revealed that she was moving to Hershey, Pa.

Glassman signed off on the recommendation, albeit reluctantly. He hand-delivered the letter to Shaun, telling the medical marvel that he believed in him and wanted him to stay. He then promised to give Shaun some much-needed space if he’d reconsider leaving. Claire also spoke to her fellow resident about his potential departure, saying how much she’d miss him if he left. He ultimately made the decision to stay, returning the recommendation letter to Glassman at the end of his shift. (What, you didn’t expect the Good Doctor to leave, did you?)

Afterward, Shaun headed home to say goodbye to Lea. In their final exchange, she wrapped her arms around him, looked directly into his eyes and said, “Are you a good doctor? Because when I think of you, I think you are.” And as the two shared one last kiss, and most of America “aww”-ed, this recapper struggled to get past the fact that a character had just mentioned the show by name, cheapening an otherwise perfect moment. Lea also gifted Shaun with a baseball signed by San Francisco Giants right fielder Hunter Pence, an item he first took a liking to while helping her pack. He returned to his apartment, took the baseball out of its case, and placed it next to his most cherished possession of all: a framed photo with his deceased brother Steve. 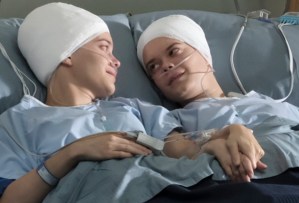 * Jenny, still in need of a new heart, woke up in recovery, while twin sister Katie remained in a coma with little to no brain activity. The plan was to take Katie off life support and give her heart to Jenny, but in a sudden twist of fate, Katie stabilized. To buy Jenny some time, the doctors re-conjoined the sisters via the thigh and added Jenny’s name to the transplant list. Unfortunately, a heart didn’t come through in time, and Jenny died.

* Kalu lawyered up and sued the hospital for wrongful termination. When Jessica came back with a cash settlement offer, he told his attorney to up the ante and threaten to go public with a discrimination case. The hospital caved, and Andrews’ hand was forced. Kalu was back in scrubs by the end of the hour.

* Last but not least was Jessica, who made the difficult decision to break up with Melendez out of fear that he’d one day resent her for never wanting to have kids.

What did you think of “Islands (Part Two)”? Drop a comment below with your reactions to the episode.