We’ve known for months that it was coming. But that sure didn’t make it any easier to say goodbye to Carl in Sunday’s midseason premiere of The Walking Dead. Read on, if you can through the tears, and we’ll review his emotional goodbyes as a way of paying our respects. 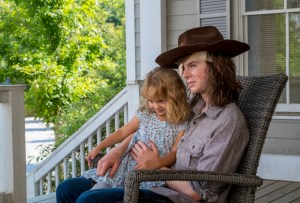 ‘IT JUST HAPPENED… I GOT BIT’ | “Honor” began with a series of relatively quick cuts: a glimpse of Rick with red-rimmed eyes mumbling, “My mercy prevails over my wrath” (clearly the theme of the back half); a jovial flash-forward to Old Rick with Judith, Jerry and Siddiq (by then a beloved member of the Alexandria community); a shot of a heartsick Rick and Michonne digging a grave; and, finally, Carl being bitten while dispatching walkers with his new pal. From there, we slowed down at least a little bit, following the teen as he hid Siddiq underground, examined his fatal wound and received from Tobin a note that Michonne had left when she’d taken off to see for herself that the Sanctuary was really surrounded by walkers. “I’m sorry I didn’t say goodbye first,” she wrote, inspiring Carl to compose a whole stack of letters — to her, Rick, Enid and then some. Afterwards, the show doubled up on its efforts to make us bawl, and succeeded — at least with me — by having Carl snap a photo with his baby sister and leave their handprints in blue paint on the porch of their house. (If we didn’t know before, we sure did then: This was gonna be a long, painful hour-plus.)

Meanwhile, this being the day that the Saviors struck back at the AHK alliance, Morgan was forced to flee from his sniper’s post when the Sanctuary’s walker blockade was dispersed, and Carol led the escaped Kingdommers to her cottage before returning alone to rescue Ezekiel. Wait, said Nabila. “You vs. all of them? They don’t stand a chance.” Henry wanted to go, too, and at the risk of turning “They killed my brother” into his own personal version of “My name is Inigo Montoya, you killed my father, prepare to die,” reminded everyone why. Natch, Carol insisted that the moppet stay behind. Also natch, he snuck off after her. Next, we went underground, where Carl was revealing his bite marks to Rick and Michonne and explaining how he’d happened to get them. Faster than you could say, “That looks infected,” we cut to the Kingdom, where Gavin was complaining about having to kill Ezekiel. “I liked you,” the Savior whined. Now “s—‘s getting s—tier, and you’re gonna die.” Not necessarily, the king countered. “I made a choice I could live with — now it’s your turn to do the same.” 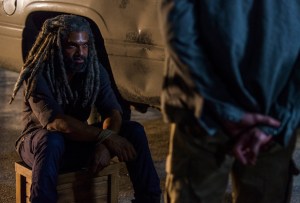 ‘YOU ARE THE AUTHOR OF THIS NIGHT’ | Back underground, a stricken Siddiq offered Rick and Michonne anti-inflammatories for Carl. It’ll help with his fever, the newcomer suggested. At least, “it did for my mom and dad.” Upon learning that Siddiq was a medical resident, Rick jumped to the conclusion that that had been why Carl brought him to Alexandria — to be their doctor. But nope, that wasn’t why. “He needed us,” Carl said simply. “That’s why.” Finally, Michonne could no longer take the sounds of the Saviors blowing up Alexandria and begged Dwight to make it stop. In response, he assured her that they had to be almost done. Once they were, that would be when Alexandria’s refugees could head for the Hilltop. However, was it really such a hot idea, Dwight asked, stashing all of Negan’s least favorite people together in one location? “All of us together,” growled Daryl, “will be [the Saviors’] worst damn nightmare.” Over at the Kingdom, while Ezekiel continued to encourage Gavin to rethink the choice he’d made, Morgan and Carol happened upon one another and began taking out Saviors, quietly and with brutal efficiency. When finally Gavin realized that his men weren’t merely ignoring his calls over the walkie-talkie, he and his last few flunkies grabbed Ezekiel and blockaded themselves inside the auditorium.

Beneath Alexandria, Michonne was spending a little quality time with Carl when we again got a peek at the Alexandria of the future — a bucolic new Eden in which Eugene had rigged a cooker to bake apples with Judith. Of course, then we were crashed back into the awful present. Since the Saviors had packed up for the night and left Alexandria, Michonne wanted to get Carl to the Hilltop. Rick, thinking his son wouldn’t make it that far, refused. He’d stay with Carl, if Michonne would take Judith. Thankfully, Daryl stepped up and volunteered to take the little girl so that Michonne could remain with Rick and Carl. Before everyone left, the teen said goodbye to his kid sister and instructed her to honor Rick and Michonne… but only most of the time, because, he added, “Sometimes kids gotta show their parents the way.” He also gave her the iconic hat that Rick had given him, and recalled that their mom had predicted he’d beat this world. “I didn’t,” he said. “But you will.” (By this point, I was thinking of hitting the local ER to have the lump removed from my throat.) For his part, Daryl gave Carl props for saving so many Alexandrians, and, in turn, Siddiq, knowing that he could never properly thank his benefactor, swore to honor him by showing his friends and family that his kindness mattered. “Congratulations,” Carl said, shaking his head. “You’re stuck with us.” 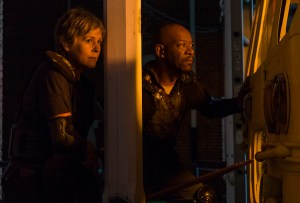 ‘KILLING ME WON’T MAKE ANY OF IT GO AWAY’ | After Morgan and Carol burst into the Kingdom’s auditorium with the confidence of contract players, they shot all of Gavin’s accomplices except for one unfortunate villain whose innards Morgan ripped out through an injury. (Can you say “gnarly”!) As for Gavin, gunshot to the leg be damned, he still managed to hobble out into the night. As Morgan took off after him, we began cutting back and forth between the Kingdom and the tunnel beneath Alexandria. In the latter spot, Carl and Michonne were saying their goodbyes. “You’re my best friend,” he told her. “You’re mine, too,” she replied, adding as best she could while choked by grief, “You’re mine.” When a candle burned out, Rick suddenly decided that they should take Carl to the Hilltop after all. Unfortunately, he was in such bad shape that they only made it as far as Alexandria’s church. There, Carl remembered shooting a boy as he and his dad were fleeing the prison after the Governor’s assault, and thanked Rick for taking the steps necessary for him to become who he had become, the kind of stand-up guy who would help a stranger like Siddiq and, if he had it to do over, wouldn’t have shot that kid outside the prison.

As Morgan was faced with a choice — to kill Gavin or not — Carl drove home the point that his father had made him the young man that he was by changing, by stopping the fighting, stopping the killing. “It can be like that again,” Carl said. “You can still be like that again.” Besides, he continued, “There’s gotta be something after.” In the Kingdom, Ezekiel and Carol beseeched Morgan not to needlessly kill Gavin. “I have to,” Morgan replied. And, for an instant, it appeared that he’d stabbed Gavin in the neck with his stick. Only the weapon was sticking out the front of his neck — Gavin had been stabbed from behind by Henry! Finally, we spent our last moments with Carl. He knew his dad couldn’t yet see how things could be, but he could. He’d seen the future — that was what all those flash-forwards were, Carl’s vision of the future. There, Rick was grayer; Judith, older; Michonne, happy. And Alexandria was flourishing. “I’ll make it real,” Rick vowed before exchanging a final “I love you” with his son. Then, at Carl’s insistence, Rick and Michonne left him alone to put a bullet in his head when the time came. (That was how much Carl had grown up.) 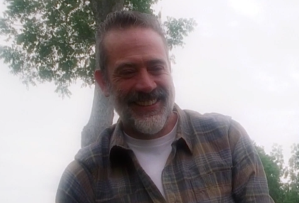 ‘WELL, GOOD MORNIN’ TO YOU, DARLIN” | At dawn, Rick and Michonne heard the telltale gunshot and began digging Carl’s grave in, if I’m not mistaken, the very spot where he’d envisioned Alexandria’s lush garden. Before the episode concluded, we got one more peek at Carl’s Alexandria of the future: In it, Judith was issuing a sweet greeting to Negan, who was older and grayer and tending to tomatoes as if he thought he was Hershel Greene. And in the last shot of the episode, the Rick with red-rimmed eyes was plopped beneath a tree that appeared to have the church’s stained-glass windows hanging from its branches (WTH?). And it was no longer just his eyes that were read, his arm was bloody, too. Was that a bite wound? Would he have slit a wrist (and if so, just the one)? Am I daft, or was the show trying to confuse us? (Click here for showrunner Scott Gimple’s response to those questions.)

Whatever the case, what did you think of “Honor”? Was it a fitting sendoff for Carl? Grade the midseason premiere in the poll below, then hit the comments.