By now, Chandler Riggs has made peace with Carl’s demise on The Walking Dead. Yes, finding out that he was being killed off in the middle of his eighth season with the AMC drama “was definitely quite the surprise for me — and for everyone, I think — but ultimately,” he tells TVLine, “it’s for the best for my career and the story. Carl leaves behind such a humanitarian idea for Rick and everyone. The way he went out was empowering and inspiring.” 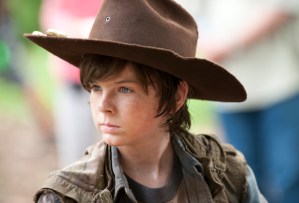 Not that that made shooting Sunday’s “Honor” any easier for the actor, a mere 10 when he was cast as the Grimeses’ son. “It was kind of awkward, just because everybody knew what was coming. It was the elephant in the room, and nobody really wanted to talk to me about it,” he says. “I think it helped that I didn’t have a really negative outlook on it. Being on the show for so long, it was nice to have the idea that I could go and do other movies and TV shows. By then, I had kind of made the choice to move to L.A. and do everything on my own. So I think bittersweet is a good way to describe” the making of that last episode.

Among Carl’s emotional farewells to his family and friends, one stands out to Riggs as having been particularly challenging: his final scene with his character’s baby sister Judith. “The stuff I had to say was super depressing,” he notes, “so that was definitely the hardest. But it was all super hard, because I had to say goodbye to such amazing people.

“It was something that I hadn’t ever done before,” he adds. “This time it was me leaving, not another cast member.” 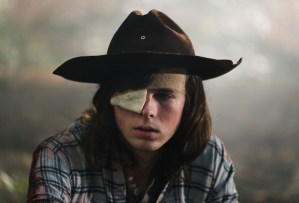 At least Riggs got to take home with him the perfect souvenir. “At the end,” he says, “they gave me a [copy of Carl’s iconic] hat and a framed shirt that I’d worn in Season 1, so I got to keep some stuff.”

Now, the 18-year-old is focused on what comes next, whatever that may be — “I’ve always wanted to do something cool, like Ender’s Game” — and reflecting with gratitude on his time among the walkers. “Most actors go without work for a while, and it was really nice not to have to worry about that for eight years,” he says. But it’s also “nice to kind of know that, after The Walking Dead, there will be more to my career.”