Twizzle me this: Is it hot in here, or is it just Olympic ice dancing’s free dance?

And by the time the last toepick had left the ice Monday, Virtue and Moir’s smoldering skate earned them another place on the podium. The Canadian pair won gold, while Papadakis and Cizeron nabbed silver and U.S.A.’s Maia and Alex Shibutani earned bronze.

Of course, we couldn’t let the competition end there. So here are a few awards we would’ve give out, had we been sitting at the judges’ table: 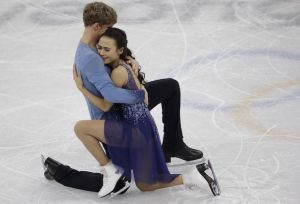 MOST HEARTBREAKING MISTAKE | Madison Chock and Evan Bates of the U.S. locked blades going into a combination spin, sending both of them tumbling to the ice. Though they recovered and finished their program beautifully, the devastation on their faces — particularly Chock’s — as they left the ice was palpable.

BEST ARM CHOREOGRAPHY | Spain’s Sara Hurtado and Kirill Khaliavin, who skated to music from Man of La Mancha and dressed in garb to match, worked in several flamenco-style gestures that made their routine sing.

WORST ARM CHOREOGRAPHY | Turkey’s Alisa Agafonova and Alper Ucar wore Egyptian-style costumes and did several hieroglyph-inspired poses during their number. It was weird.

MOST MOVING RESPONSE TO A SUCCESSFUL SKATE | When Olympic Athlete From Russia Ekaterina Bobrova fell to her knees after a moving routine, partner Dmitri Soloviev immediately dropped to the ice and pulled her to him in an embrace.

TIGHTEST TWIZZLE | So many couples were so on point here, but we’ve gotta give this one to the U.S.A.’s Shib Sibs.

NUMBER MOST LIKE REAL LIFE… IF YOU LIVE IN A TELENOVELA | Canada’s Kaitlyn Weaver and Andrew Poje’s routine told the tempestuous story of a couple on the verge of a breakup, complete with smeared makeup and tears.

THIGHS OF STEEL AWARD | So many couples, including Germany’s Kavita Lorenz and Joti Polizoakis and Italy’s Anna Cappellini and Luca Lanotte, did that crazy lift in which the female skater plants the blades of her skates on her partner’s quads and then rides him like a skateboard. Impressive, no matter how many times we see it.