Hear me now, The CW: We need a fourth season of Crazy Ex-Girlfriend… if only to see how Rebecca gets herself out of this terrible mess she’s made. 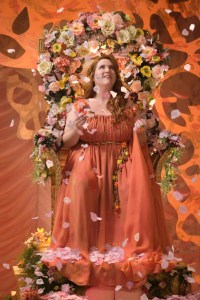 As Friday’s Season 3 finale opens, Rebecca’s hilariously obsessive ex Trent is gone, but she’s still having nightmares that he’s lurking around every corner. The whole gang gathers for Heather’s doctor appointment — Paula sings her a lilting ballad, “The Miracle of Birth,” that offers unnecessarily graphic details about the childbirth process, complete with kid dancers emerging from a vagina-like door — but Rebecca’s too distracted by visions of Trent to participate. After an emergency meeting with her borderline support group, she realizes she needs to confess all her misdeeds to clear her conscience. (And boy, that’ll take a while.)

So Rebecca invites Paula, Nathaniel and Josh Chan (!) to a meeting she calls “The Purge,” handing them each a written multi-point confession of all her sins. It’s all there: trying to put a hit out on Nathaniel’s girlfriend Mona; threatening to deport Josh’s dad; even sleeping with Greg’s dad. (Gross, don’t remind me.) Paula is devastated, though, when she learns Rebecca lied about Trent blackmailing her, too, and storms off, swearing off all contact with Rebecca: “I am a sucker! You are never going to be any different!” To make matters worse, Rebecca runs into a turtleneck-clad Trent. No, it’s not a hallucination, he’s actually there… and he’s plotting to hurt Rebecca as badly as she hurt him.

While the rest of the office heads over to Nathaniel and Mona’s housewarming party, a panicked Rebecca gets a notification on Instagram: Trent’s going there, too, and is threatening to murder Nathaniel. (“If I can’t have you, no one will.”) As Rebecca races over, we see Trent posing as a caterer in a goofy wig and pulling Nathaniel aside to approve extra charges on condiments. When Rebecca arrives, she finds Trent looming over Nathaniel with a knife and lunges at him… sending Trent toppling over the ledge. 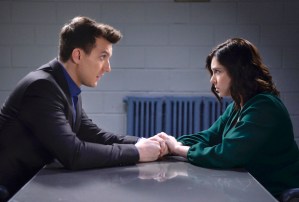 Trent’s not dead — he landed in a swimming pool — but he still broke every bone in his body. (Again.) So Rebecca gets hauled away in handcuffs and charged with attempted second-degree murder. No one believes her wild stories about Trent, and his incriminating Instagram posts have vanished. Well, one person believes her: Nathaniel, who tells her he broke up with Mona because he realized he’s in love with Rebecca. He thinks he can get her off… if she pleads not guilty by reason of insanity. He makes his case with a stirring duet, “Nothing Is Ever Anyone’s Fault,” where the two of them agree that bad childhoods have messed up everyone from John Wayne Gacy to Hitler. (“Psychology is a great excuse!”)

At her court hearing, Rebecca is ready to enter her insanity plea, but she stops when she sees Paula walk in. She realizes she only has herself to blame for every terrible thing she’s done… and is prepared to face the consequences. With an approving Paula beaming from the gallery, Rebecca turns to the judge and declares, “I plead guilty.” So is Season 4 — if we get one — going to play out like a West Covina version of Orange Is the New Black, with Rebecca behind bars? Well, at least there’ll be a few musical numbers to lighten the mood. 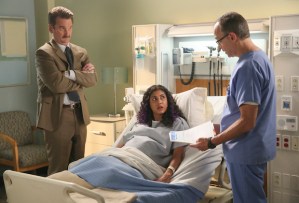 * Heather gave birth to Darryl’s baby, thanks to an epidural that freed her up to do crossword puzzles and binge-watch Top of the Lake. This subplot did provide the LOLs this week: Paula’s uncomfortably gory song; Heather complaining that “my downstairs are going to look like beef tartare”; referring to Braxton Hicks contractions as “Toni Braxton.”

* Speaking of the baby: Darryl named his newborn daughter “Heabecca” — a combination of Heather and Rebecca. Oof. Luckily, he has time to come to his senses on that one.

* No word on a fourth season yet, but it’s a good sign that The CW is expanding to Sundays next season, giving Crazy Ex two more possible slots to fill.

* Gotta say, Valencia and her lesbian girlfriend Beth are not really working for me. It feels forced, just for the sake of shaking things up. And when is Valencia going to deal with her own Josh Chan issues? They were engaged!

* Aw, Rebecca’s phone background is a photo of her and Paula. She’s your true love, Rebecca!

* Thank goodness Trent isn’t dead. I want more of Paul Welsh in Season 4, please — even if he’s in a full-body cast.

Your turn: Grade the Crazy Ex season finale in our poll below, then hit the comments to share your post-Season 3 thoughts.