Jensen Ackles may want to think twice about trusting his wife on Supernatural.

The actor’s real-life spouse Danneel Ackles kicks off a recurring arc this Thursday (The CW, 8/7c), and her faith-healer alter ego Sister Jo has some shifty allegiances.

“She’s not really, ‘I’m an evil person’ or ‘I’m a good person,'” the actress tells TVLine. Instead, Sister Jo’s line of thinking is more along the lines of, “‘I’m just going to do whatever gets me a little bit higher up the ladder.’ So if she can make a deal with Lucifer that day, that’s great for her, [and] she’s going to do that. If she needs to help the Winchesters another day, then that works.”

Below, Danneel Ackles reveals how the “badass” role came to be hers and previews Sister Jo’s agenda.

TVLINE | Has this been something that you’ve wanted to do for a while, to be on the show?
Not really. Back when the show first started two million years ago, I was out on One Tree Hill, and [Jensen] was up in Canada. So we were both very busy. Then when we started having kids and things slowed down, Supernatural was already on its way, and I thought, “That’s his thing.” But now, Eugenie [Ross-Leming] and Brad [Buckner], who are executive producers of the show, came up with this character and pitched it to me, and I thought, “Yeah! This is it. This is the reason to do it.” She’s a badass female character who just knows what she wants, and they kind of wrote it with me in mind, they say. So I was just really attracted to it, and wanted to give it a shot.

TVLINE | Besides being a badass, what else defines her?
They kind of pitched her as a business woman. She’s in it for herself — not in a negative way. Not in a “I’ll step on whoever I have to make things great for me” [way]. More in the way of, “You know what? That sounds good. I like that today. And that sounds great. I like that. That works for me, and that’ll help.” So she’s a business woman and a very powerful faith healer. 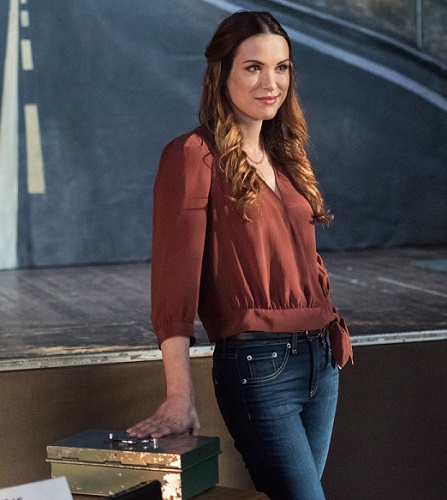 TVLINE | So the faith healing is for real? It’s not part of some scheme?
No. It’s the real deal. She is an extremely powerful faith healer… so powerful that she attracts Lucifer’s attention. That’s what initially starts all this. And wherever Lucifer goes, the Winchesters go. That’s how we all end up in this little pocket together.

TVLINE | How aware is she of who Lucifer is and the supernatural world?
I don’t know at first if she is. She’s just very aware of how powerful he is. And like I said earlier, she is really drawn to powerful people, and people that can help her move forward in her life. So that attracts her to him. She’s like, “He can help me.” And he’s very charming.

TVLINE | The Winchesters have a very long and complicated history with faith, dating back to Season 1. What do they make of Sister Jo and her abilities?
At first, I think they’re a little skeptical. But they’ve seen a lot in their day. They don’t really come after her, because they’re like, “Well, maybe she can help us.” They kind of leave her alone because she has some qualities that they need to use. Everybody’s using everybody!

TVLINE | And what are her first impressions of Dean and Sam?
I don’t think she really cares too much about them. They ask for assistance, she works a deal with them because she’s this deal-making business woman, and that’s that.

TVLINE | Jared [Padalecki] and Jensen have a reputation for hazing newcomers. Did they try to pull any pranks on you?
You know, I think they would have, except I did such a good job of doing it to myself that, no, they didn’t really have to. They let me concentrate. I only had a couple scenes with them. So I think had there been more opportunity… I lucked out. One of our scenes was first in the day, and the other one was really quick, and it was right before they had a ton of work to do. And that’s the key with those two: If you get them when they’re a little slaphappy at the end of the night, that’s when you’re asking for trouble.

TVLINE | You obviously have a unique insider/outsider perspective on the show and are very familiar with it. When you got to set to shoot, did anything surprise you about the experience?
I was surprised how short Jensen was and [how] tall Jared was. I’m just kidding. [Laughs] No, it was pretty professional. The first two or three scenes we did, we all kept having these surreal moments. I believe there was one time I called Jared “Jared” in the take. No, we all buckled down, and it was pretty good.