Raise your crumpled-tear-stained-Kleenex-holding hand if you feared watching Jack’s funeral on Tuesday’s This Is Us might be even harder to bear than witnessing his death!

We’ve known this day was coming, right from the start of last season. We’ve even seen snippets of it, black clothes and weeping and The Big Three (plus Mom) at their very lowest point, etc. But where Sunday’s episode offered a form of twisted relief — at least now we finally know how he died! — Tuesday’s hour repeatedly points out how huge an immediate hole Jack’s death leaves in the family. In fact, there’s no present-day footage in the entire installment.

Read on for the highlights of “The Car.” (And when you’re done, make sure you check in with Milo Ventimiglia about what’s ahead for the rest of the season.)

FOUR-WHEEL DEAL | Rebecca sits alone in the family car and honks the horn a couple of times. She’s barely holding it together. She reaches in her purse and takes out some tickets for a Bruce Springsteen concert. But before we can get too bummed out, the action flashes back to a car dealership on a happier day: the one where the Pearsons (circa the kids age 8 or so) are ready to buy a new vehicle. She laments that they should’ve gotten a sitter, but Jack disagrees: The kids are “walking embodiments of why we’re so strapped for cash,” he jokes. 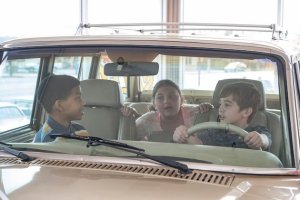 Mom and Pop Pearson immediately turn down the salesman’s suggestion of a shiny new Jeep Wagoneer, saying it’s too expensive, but when the kids climb in and play in the floor model, Jack’s mind is made up. He and the salesman negotiate, and pretty soon, the Wagoneer is theirs.

As we return to the sad flashback, the teens climb into the Wagoneer with Rebecca and head out to the funeral. Things are tense. Kev can’t tie his tie and declares he’s not wearing it. Kate says she wants to get rid of Louie the dog.

THE LIVING TREE | The rest of the episode unfolds over several flashbacks including the car. The first involves Jack and Rebecca taking the trio to their first concert — Weird Al Yankovic — and Rebecca freaking out when they get stuck in traffic on a bridge that makes her nervous. The kids distract her by singing Yankovic’s “Lasagna” (which, for the uninitiated, is sung to the tune of “La Bamba”), the traffic clears, and all is well.

In another, Rebecca and Jack sit in the front seat after she has an MRI, worried that her dizziness is indicative of a brain tumor or something equally scary. While they wait for the results, Jack decides to drive her to “my favorite tree.” It’s snowing, and they sit in the dark on the bench by the tree we’ve seen the adult versions of Randall and Kevin visit. Jack assures his wife that she’s going to be OK, and she wonders how he can be so sure. After all, “How is the snow still going to fall if you’re not around to see it? It just wouldn’t seem right,” he says. And why is that nondescript his favorite tree? Because it’s the spot where they’re going to find out that she’s fine, he says confidently. And when they do finally get the news, he’s right: Her dizziness is just the result of an inner-ear issue. “How did you choose that tree?” she asks after hugging him. “It’s the closest one to a pay phone,” he says, smiling.

But things get DARK when they get back in the car. He says he’s pretty sure he’s going to die before her, and requests one thing: “Don’t put me in the ground.” He wants to be scattered outside. She agrees, then asks if they can talk about something else.

URN RESPECT | The funeral is held at the cemetery. Miguel and Randall speak during the service. “I hope that one day, I can find a love like my father had for my mother and like she had for him,” Randall says through tears. Rebecca zones out during the proceedings — which her mother attends — but snaps to attention when the cemetery employee says he’ll transport Jack’s urn to the reception. She quickly says she’ll take her husband’s remains, instead, and makes a beeline for the car with the urn in her arms.

JACK OPENS UP ABOUT NICKY | In happier times, we watch Jack teach Randall how to drive while Kevin sits in the Wagoneer’s backseat. The boys get into an argument while the car is in motion, and a distracted Randall blows a stop sign and nearly gets them all killed. “Get out,” Jack says as the kids exit the car. “You’re walking.”

When they get home, Kevin apologizes on both of their behalfs. “I don’t understand you two. My brother and me? Inseparable when we were your age.” Randall notes that his dad never talks about their uncle or much of anything from when he was a child. “Nicky was my best friend. We went to war, and he died,” Jack notes, adding that there’s not much fun about reminiscing. “My brother and I, we had to look out for each other. No one was going to do it for us,” he adds, saying that Kev and Randall need to fix the stuff that’s broken between them, “because your mom and I aren’t going to be around forever” and the kids are going to want other people who can look back and remember their shared childhoods.

BROS BEFORE ROLEX | At the reception, Kevin freaks out when he realizes that Randall is wearing Jack’s watch. The argument intensifies as everyone watches Kev tell his brother that he’s sick of seeing him pretend to be the new man of the house. “A real man would’ve stopped Dad from going back in there,” Kevin says nastily, but Randall counters that his brother wasn’t even there. Kate gets them to stop the public show, but nothing is resolved.

AND I’M HERE TO REMIND YOU | How about another fun flashback? Jack’s driving the Wagoneer when he happens to see Kate waiting for a bus at 10 am on a school day. She confesses that she ditched school to go have Alanis Morissette sign her copy of Jagged Little Pill at a record store. To her surprise, he drives her there instead of making her go back to school. “This is like complaining with a guitar, Kate,” he says when Kate pops the cassette into the car’s tape deck. Then he plays her his favorite artist: Bruce Springsteen. Kate observes that the two artists aren’t all that different. “They make you feel like they’re your best friend but also you at the very same time,” she says, then confides in her dad that she’s been writing her own music. Before he lets her out at the signing, he encourages her to consider a future in music, because “Whatever Kate Pearson has her heart set on, she gets, OK? Don’t ever forget it.” And before he takes off, he says that maybe he’ll get them all some Springsteen tickets sometime.

HEY DR. K! | And now another soul-sucking moment: It’s the night that Jack died, and Kate is processing the fact that she, Rebecca and Randall didn’t have smoke inhalation problems, and “Dad would have gotten out in time, too, if he hadn’t gone back inside, right?” Rebecca doesn’t want her daughter to beat herself up for asking Jack to go back in and get the family dog, but Kate walks away, and that’s where the conversation ends.

But wait! Now we’re back at the day of the funeral, and Dr. K is there! “We have to stop meeting under such dramatic circumstances,” he says, then introduces his wife, Anne. (Aw, yay!) He remembers that Jack would stop by the hospital now and again when the kids were young, which seems like it’s news to Rebecca. Then Anne leaves them alone for a few moments.

“So what are you doing out here?” he asks her. “I wasn’t there when he died. I have been following his urn around all day because I wasn’t there and I want to make up for it,” she says, crying and worrying that she can’t do it all on her own because she’s afraid, and Jack was “fearless.” Dr. K comforts her. “The man I knew, the one that used to drop by my office unannounced from time to time, he had a whole lot of fears,” he says. “But he did a pretty good job taking care of his family, didn’t he?”

The kindly doc reminds her that she is insanely strong, too, calling to mind the day she lost an infant and adopted another. It bucks her up. “Can I just sit here with you for a while?” she asks quietly. He puts an arm around her and rests his cheek against her head, murmuring, “Sitting is what I’m best at these days.” 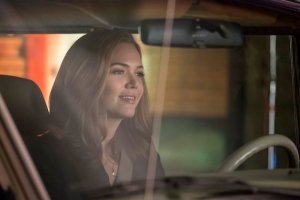 ‘WE’RE GONNA BE OK’ | The final flashback takes us to just before the fateful fire, when Jack advises everyone not to make plans for the following Saturday — he’s got a surprise for them. (Sad spoiler alert: It’s the Springsteen concert.)

At the reception, Rebecca suddenly decides that it’s time to go. She grabs Jack’s urn and wrangles the kids, hustling them out of there without much explanation. They wind up at Jack’s tree, where Rebecca seems to come back to herself for the first time since her husband passed away. “Hey, you know neither of you has to be the man of the house now, right? You’re two 17-year-olds,” she tells Kevin and Randall. Then she forcefully tells Kate that “It was not your fault” that Jack died. “He was a grown man who made a choice.” They’re all crying, but they agree it’s time, and they each take turns sprinkling some of the remains in front of the tree.

When it’s done, Rebecca tells them about Jack’s purchase of the Springsteen tickets. They all agree they should go. The teens head back to the car, but Rebecca takes a moment to herself. “We’re gonna be OK, babe,” she whispers through tears. “I promise you we’re gonna be OK.”

As the hour ends, we hear what Jack said to the Jeep saleman. “Every battle scar is going to be another memory. And eventually, that car out there is going to tell my family’s story just by looking at it,” he says, noting that they can’t afford the model. But he wants his family to be OK, “So will you help me? Will you help me take care of my family? I see my family OK in that car.”

And as we watch, Rebecca drives to the concert. Kevin grabs Randall’s arm in apology and reconciliation. And when it comes time to cross the troublesome bridge, Rebecca drives right over and doesn’t even blink.