There are some Super Bowl mysteries that will never be solved. Like, for instance, why do football players have to be so gosh darn rough with each other? It’s just a game, people — make like the Giants and chill out! However, there are other questions surrounding the annual gridiron classic that are far easier to answer. And so we did. Answer them. Below.

Why did Netflix’s initial commercial for The Cloverfield Paradox sidestep the critically important fact that it was being released immediately following the game?
According to multiple sources, NBC — already skittish about giving promotional airtime to This Is Us‘ post-game competition — insisted the streamer use the super-vague “coming soon” language at the end of the spot. 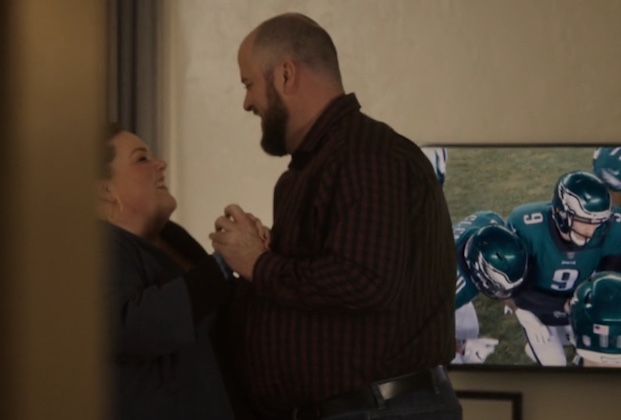 Throughout Sunday’s This Is Us, footage from this year‘s Super Bowl was seen playing on multiple televisions sets in various Pearson households. How did the show’s technical wizards pull that off?
We hear it took 100 people in New York, L.A. and New Jersey to execute the herculean task. In a nutshell, a team of editors quickly grabbed the necessary game footage before sending it off to the VFX and sound pros for color correcting and audio balancing, after which the video was superimposed into the Pearsons’ TV sets and then pushed out to NBC’s satellites in record time.

Rumors that Justin Timberlake’s halftime performance might feature a “Prince” cameo triggered an immediate backlash when word of the stunt leaked out last week. So… why didn’t JT jettison the gimmick rather than dive head first into yet another Super controversy?
On Sunday’s Super Bowl-themed Tonight Show, Timberlake told Jimmy Fallon that he set out to honor the music icon’s legacy, not tarnish it. “I just wanted to use that opportunity to do something special for [Prince’s hometown of Minneapolis],” he explained, “but most of all, for my favorite musician of all time.” 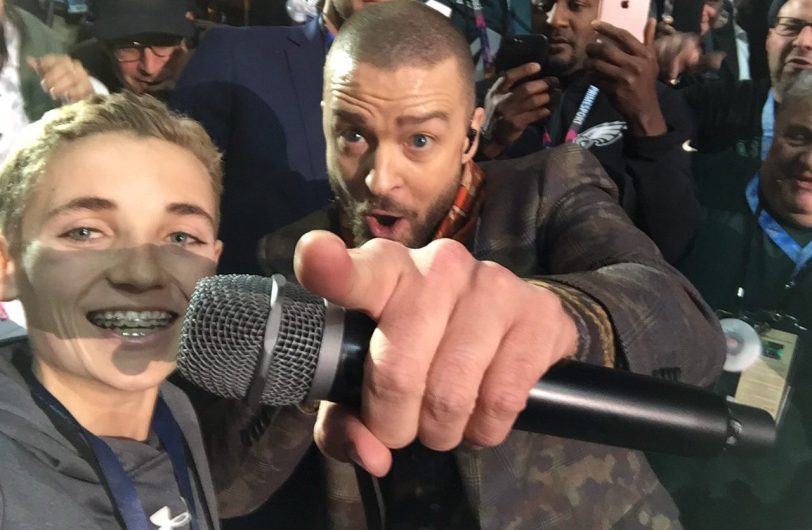 Speaking of JT, did #SelfieKid Ryan know ahead of time that he’d get some face time with the “Filthy” singer?
Nope. The overnight sensation maintained to GMA that his close encounter with Timberlake was unplanned. “He just came up [to me] and I jumped in there with him,” he said. “He’s my favorite singer so I had to get the selfie with him.”

Why did NBC’s feed temporarily cut out during the second quarter?
As we reported, a “brief equipment failure” led to the 30-second outage, per an NBC Sports spokesperson, who quickly added, “No game action or commercial time were missed.”

How much did Tide spend on its myriad commercials?
With 30 seconds of airtime in the Big Game costing more than $5 million, the four spots (a total of 90 seconds) added up to about $15 million (not including production costs), according to AdWeek.com.

How did Dr. Martin Luther King Jr. come to be shilling for Ram trucks?
A 90-second excerpt from the civil rights leader’s 50-year-old “Drum Major Instincts” sermon — which in its entirety, actually decries overzealous consumerism — was used to narrate a Ram ad. Both The King Center and King’s daughter Bernice tweeted that they are not responsible for allowing the extremely rare usage of MLK’s speeches. A rep for Ram’s parent company assured Adweek, “We worked closely with the representatives of the Martin Luther King Jr. estate to receive the necessary approvals and estate representatives were a very important part of the creative process every step of the way.”