Humanity has figured out a way to live virtually forever! Yay! But by doing so, it has sent society tumbling into a morass where issues of class, morality and wealth distribution have created a soul-sucking dystopia. Booooooo.

And when Netflix’s Altered Carbon reawakens a 22nd-century warrior centuries after his death and thrusts him into this terrible new world, things get even more complicated.

In a moment, we want to hear what you thought of the new sci-fi series, all 10 episodes of which began streaming Friday. But first, a brief recap: 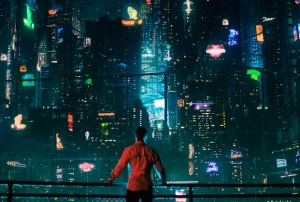 Everything in the new series, based on Richard K. Morgan’s novel of the same name, centers on a specific piece of technology: A person’s consciousness is recorded in his or her “stack,” hardware installed near the base of the brain that can be removed after physical death and reinstalled in a new body (or, as the show calls it, “sleeve”). However, “If your stack is destroyed, you die,” a character warns near the top of the episode. “There’s no coming back from real death.”

Takeshi Kovacs (The Killing‘s Joel Kinnaman) is the aforementioned warrior, one of a group known as Envoys, who opposed this artificial immortality and fought to end it. They lost. Kovacs was thrown in prison and his stack was deactivated… until a few hundred years later, which is when the series begins. Kovacs is reactivated at the behest of Laurens Bancroft (The Following‘s James Purefoy), an incredibly rich man who is one of the oldest men alive. Bancroft has a mystery that needs solving: Someone killed him — or, more accurately, destroyed his sleeve and trashed his stack — but he’s rich enough to have a complete backup beamed to a remote server thingy every so often. However, thanks to download/upload complications, Laurens can’t remember the identity of his assailant.

Laurens’ bargain appears simple at first: If Kovacs will solve the mystery, Laurens will buy his permanent freedom.

As you can imagine, having your consciousness plunked into a body that hasn’t been yours from birth is disorienting. (Indeed, we see Kovacs in his previous incarnation via flashbacks; later episodes show other versions.) Before Kovacs has even been in town a day, he takes a ton of drugs, has a drink with the angry detective who originally investigated Bancroft’s death (Martha Higareda, Royal Pains) and checks into a hotel run by an artificial intelligence calling itself Poe. That’s where he gets into a massive shootout with some thugs who show up and seem to want answers… though Kovacs isn’t sure why. 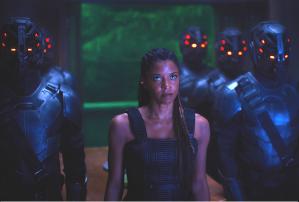 Lonely, high and with memories of a former love named Quell (One Life to Live‘s Renee Elise Goldsberry) flitting through his mind, Kovacs considers killing himself. But the vision of Quell that appears to him at his darkest moment urges him either to move on or “Do what you were born to do, what I trained you to do: Make things change.” And when he scoffs that saving an old rich guy won’t do much, she hints, “There’s more here than you’re willing to see.”

At the end of the hour, Kovacs calls Bancroft: “I’ll take the case.”

Now we want to know what you thought about Altered Carbon. Grade the series premiere via the poll below, then go to the comments to back up your pick!