Whether or not Bailey’s heart could take the stress of Thursday’s Grey’s Anatomy, we had our doubts about whether ours could!

Early on in “(Don’t Fear) The Reaper,” the doc bailed on a ride to work with Ben by suddenly announcing mid-drive that she had a meeting at Seattle Pres. And at first, it appeared that she’d just been ticked off by her husband’s “not cute” mention of his firefighter training that day. But, it turned out, she was checking herself into the hospital with symptoms of a heart attack!

Though first an intern, then big kahuna Dr. Maxwell, assured Bailey that she was fine, she knew otherwise and tried to get a cardiac stress test ordered. No dice. Instead, Maxwell focused on Miranda’s OCD and called in a psych consult. Desperate, Bailey phoned Maggie and told her to come to Seattle Pres, stat. “That’s an order,” the chief added. “Also a request.” Before Pierce arrived, the shrink asked Bailey what she’d say if asked to consult on a case like hers, in which there was no data to support the self-diagnosis and no apparent support system in place for the patient. Her perfect response: “Sixty-three percent of women who die suddenly from coronary heart disease had no previous symptoms, and women of color are at a far greater risk, so if I were consulting on the patient you describe, I would take into consideration statistics that would never even occur to people who look like you.” (Mic, dropped.) 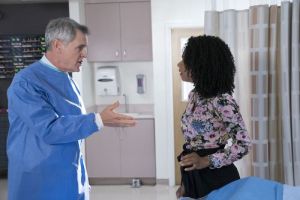 By the time Maggie’d arrived, so had Richard, who’d overheard Maxwell being paged when Bailey called in sick. When they found Bailey, she was saving the life of the patient in the bed next to hers. (Even during a cardiac incident, Superwoman didn’t stop!) Finally, Miranda collapsed, and when Maggie got done tearing Maxwell a new one, he operated to open a blockage. Unfortunately, that didn’t entirely get the patient out of the woods. In recovery, her pressure started dropping precipitously! Upon learning that Maxwell hadn’t ordered a cardiac stress test for Bailey, Maggie tore him yet another new one, and with Richard backing her, was granted hospital privileges to perform a keyhole CABG on the patient (a procedure far less invasive than the old-school one Maxwell prescribed).

Before surgery, Bailey finally allowed Maggie to call Ben, who immediately ran — literally, ran — to Seattle Pres. While Pierce saved Bailey’s life, Richard made Ben understand that the way he felt in that waiting room was the same way his wife was going to feel every time he set off for a day of firefighting. So, when Miranda awakened, it was to the news that Ben had told his boss at the fire station that he’d quit. Instead, she wanted him to keep his new job. “Life is too precious to waste doing anything less than what makes us happy,” she seemed to have been reminded by the hour’s many fantastic flashbacks (young Mandy! George! Derek! Callie!).

So… that was scary! While our palpitations die down, let’s talk with Chandra Wilson about her reaction to “(Don’t Fear) The Reaper” and its implications for Bailey’s future.

TVLINE | Did you get a heads-up before you got this script, or were you reading it going, “Wait, are they killing me off?!?”
[Laughs] The writer [Elisabeth R. Finch] gave me a full-on verbal pitch from start to finish, including the flashbacks, of what this episode was going to be, and I was excited watching her be so excited about writing it! All I wanted to do was fulfill that [vision] for her. It also provided an amazing opportunity to again find out something new about Miranda Bailey, if you can believe there’s something new to be seen after 14 seasons. But there still is, and I love that. 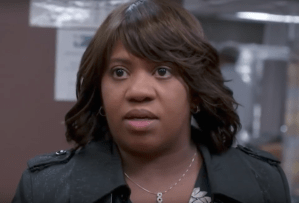 TVLINE | How does this scare affect Bailey going forward? What’s next?
I’m really excited to be able to incorporate this heart surgery into [my portrayal of] Bailey along with her OCD — because those things don’t go away. They will forever change you. I’ve spoken to heart patients, and they tell me that there’s an uber-awareness of what’s happening with your body that wasn’t there before. It’s always there somewhere, brewing.

TVLINE | Were you surprised that Bailey could be so pissed at Ben that she would keep him in the dark for so long about what she was going through?
No, Bailey doesn’t surprise me at all. [Laughs] I’ve never been the kind of actor who would say, “Bailey would never do such and such.” I’ve never had that kind of ownership over her, because I’ve always wanted the writers to have the opportunity to free themselves to write whatever they wanted to. So Bailey’s not letting him in? OK, she’s got a reason for it. It’s not good for him to know yet. When she knows something, he’ll know something. But he doesn’t need to sit there and hold her hand right now.

What did you think of “(Don’t Fear) The Reaper”? Did you love the flashbacks? How perfect was the casting of young Mandy? Were you as surprised as she was to learn she’d had a sister who’d died? Hit the comments.