The X-Files finally gets around to introducing us to Mulder* and Scully’s now-teenage son in this week’s episode and, man, the kid’s got skills.

In the space of an hour, the boy romances two young ladies, outsmarts gunmen trying to kill him and fakes his own death — all with just the power of his highly suggestive mind. Somewhere, Robert “Pusher” Modell is wiping away tears of pride.

Read on for the highlights of “Ghouli.”

* I refuse to believe that Cigarette Smoking Man is telling the truth about fathering William, and I will arm-wrestle anyone who wants to come at me.

THE HORROR | Two teen girls prowl an abandoned and run-down ferry near Norfolk, Va., each holding a knife, each looking for a mysterious creature they call “Ghouli.” (Think Slenderman, but more buglike.) The girls don’t know each other, but they’re each convinced that the other is the monster they’ve shown up to see. And when one girl falls through a rotting deck into an area where the other girl is primed for a fight, they go at each other — but the kicker is that they each see Ghouli in front of them. They stab away, but when both girls hit the ground, bleeding hard, we see that there never was any monster in there at all.

Meanwhile, Scully’s been having sleep-paralysis-style dreams where she wakes in a strange bed and follows a shadowy figure around a house. “Where was it leading you?” Mulder asks when she describes the episode, and she dazedly looks down at photos of the ferry crime scene that just happen to be on his desk: “There,” she says, remembering that the ferry (named Chimera) was in a snowglobe in her dream. 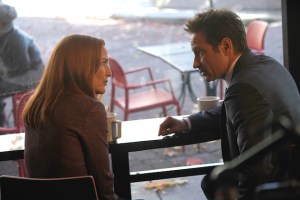 Mulder’s convinced that Scully’s dreams are an evolution of her seizures, and he’s also convinced something else is going on, because they’re being followed. At the hospital, the girls — Brianna and Sarah — divulge one important detail: Unbeknownst to each other, they are both dating the same boy… and his name is Jackson Van de Kamp.

Scully halfheartedly notes that it has to be a coincidence that the kid has the same last name as the family that adopted William all those years ago, but Mulder vehemently disagrees. And as they pull up to the Van de Kamp house, they hear two gunshots. Mulder breaks down the door and sees Mr. and Mrs. Van de Kamp dead on the kitchen floor. A third gunshot sounds from upstairs, and that’s where Scully finds Jackson dead on the floor of his room.

The local police think it’s a murder-suicide, but Mulder is very skeptical. “I think you’re trying to find answers to questions nobody else is asking,” a detective tells him. Well, yes. That’s exactly what he does, nondescript detective! Scully is in a bit of a daze as she looks around Jackson’s room and notes a Malcolm X poster and a book about how to pick up girls; she recognizes the house from her dream. She pockets one of his snowglobes — one with a windmill — while Mulder confronts the two men who’ve been tailing them. The guys are with the Department of Defense, he guesses, and they’re jerks. “Keep cracking wise,” Mulder warns them. “You have no idea my state of mind.”

A MOTHER’S LAMENT | In the morgue, Scully swabs her own cheek, takes a sample of Jackson’s hair, then sits down by his body and sobs out her regret in a monologue that is some very fine work by Gillian Anderson. “Maybe I should’ve had the courage to stand by you,” she says, crying right from the start as she apologizes for giving him up for adoption, “but I thought I was being strong. It was the hardest thing I’ve ever done. To let go and to know that I was going to miss your whole life. But it turns out that this is the hardest, to see the outcome and how I failed you. I need you to know that I never forgot you.” And then she talks about wanting to ease his pain, which instantly takes me back to that scene in “Sein Und Zeit,” and now Mulder is there and hugging her and telling her “you have nothing to apologize for” and I’M DEAD.

But know who’s not dead? Jackson, who unzips his own body bag from the inside and sits up after Mulder and Scully leave to take the samples to the lab for a DNA test.

WHERE’D HE GO? | While they’re waiting for the results, Scully falls asleep on a couch in the hospital lounge and winds up having another sleep paralysis vision thing. This time, she sees Jackson in a hooded sweatshirt and follows him around the hospital, finding the snowglobe she pilfered on a bedside table. “Is this a message to me? Or am I sending a message to you?” she muses. But before she gets an answer, the coroner wakes her up, wondering where the body is.

When Mulder returns to the morgue, he’s got bad news: William and Jackson are the same person. But Scully see this as great — because their son appears to be very alive, if just MIA for the moment. “He wants us to find him, Mulder. I know it,” she says, and for once in his damn life, Mulder is the voice of reason: “I want him to be alive every bit as much as you do,” he says, but “Hope is not a fact. I’m always the first to jump at extreme possibilities, but this is not as simple as that.” I’d be more mad at him, but he’s using MulderSoftVoice like he did in that bed in Oregon back in the day, and I’m OK with it. 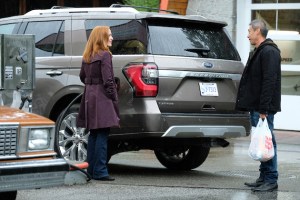 Outside the hospital’s entrance, a man bumps into Scully, causing her to drop the windmill snowglobe, which breaks. They have a friendly conversation, which he ends by saying, “Don’t give up on the bigger picture,” and I know you’re not totally yourself right now, Red, but THAT IS NOT AN ANSWER TO YOUR QUESTION OF “WHO ARE YOU?” WHY DO YOU NOT SEEM PUZZLED IN THE SLIGHTEST?

Back at Jackson’s room, Mulder and Scully find his secret laptop, which he was using to run a website hyping the Ghouli myth and also apparently hacking into the D.O.D. And when the D.O.D. meanies show up to take the machine, Mulder “accidentally” spills a soda onto the keyboard, bricking it.

PAST IS PROLOGUE | The meanies complain to Skinner, who calls Mulder, who summons him to Norfolk to dump some serious exposition: There was a secret experiment called Project Crossroads that combined alien and human DNA but which was disbanded because scientists couldn’t accurately predict which attributes the test subjects would get. The scientist, a Dr. Masumoto, burned all the files in order to protect the identities of the subjects and then disappeared, and now the D.O.D. is trying to track down everyone involved in the project.

By now, of course, you’ve surmised that William was one of the test subjects, thanks to Cigarette Smoking Man. And when Mulder tells Skinner that Jackson is actually William, it looks like someone punched Walter in the gut. “Thank you for your warning,” Mulder says, walking away. “It just came too late.”

BOY WONDER | Once he and Scully reunite, Mulder theorizes that William (that’s what I’m going to call him from now on, because that’s who he is) and his family were the subject of a hit, but that William used his powers to create an “alternate reality” by making the baddies think he was dead — the same way he made Brianna and Sarah think they were seeing Ghouli.

And at that moment, William is in Brianna’s hospital room to say goodbye and explain what happened to her and Sarah. “You saw what I projected into your head. It’s like this power,” he says. Hold up: Can we all take a moment to agree that with that floppy hair and those lashes and that way about him, William is vaguely reminiscent of Season 2 Krycek? Anyway, Sarah sees William kissing Brianna and tells the cops, who show up at the hospital — with the D.O.D. thugs — looking for him.

Everything quickly devolves into chaos, as shots are fired in the hospital when William makes one of the D.O.D. guys think he’s shooting Ghouli when he’s actually shooting one of his fellow baddies. And then he makes another think that he’s shooting Scully, who’s shooting him, but — you guessed it — it’s another Linda Bowman situation here. Eventually, he makes Mulder and Scully see him as a nurse scurrying to safety; they don’t give him a second glance as they sweep the building, then sadly hug and realize that their son is gone. 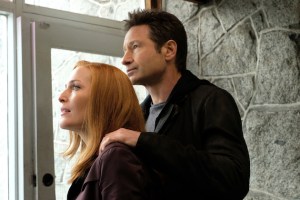 MADE YOU LOOK | On their way back to the airport, though, Scully sees a gas station featuring the same kind of windmill that’s in the snowglobe, and she suggests they pull over. While Mulder is peeing inside, Scully once more runs into the man who knocked into her outside the hospital. On a whim, she asks if he’s Dr. Masumoto, but he jokes that he never even finished high school. “You seem like a nice person,” he adds. “I wish I could know you better.” And Scully smiles kindly as though someone who spoke in similarly glowing yet kinda creepy fashion didn’t once try to yank her beating heart outta her chest with his bare hands. A little stranger danger is probably a good thing, is all I’m saying.

Anyway, she wishes the man safe travels, then he turns back and says, “If you don’t stand for something, you’ll fall for anything” before getting into his car and driving away. “He seemed so familiar,” Scully says while relating the incident to Mulder, then realizes that she knows the man’s face from his author portrait on the book in William’s room. And when Mulder recognizes the man’s parting advice as a quote from Malcom X, they think they know what’s up.

The gas station’s surveillance footage proves it: Though Scully thought she talked to a middle-aged man of Asian descent, she was actually talking to William. As they watch the tape, Mulder puts both hands on Scully’s shoulders, a little detail that I loved. And she smiles.