If anyone was going to know what they were talking about when they announced that they were having a heart attack, it would have to be Grey’s Anatomy’s Bailey. But in Thursday’s “(Don’t Fear) The Reaper” (ABC, 8/7c), “she walks into that emergency room [at Seattle Pres] describing physical symptoms,” says Chandra Wilson, who plays Grey Sloan’s Chief of Surgery, “and then she gets hit with emotional responses from the physician.

“He thinks he knows her because he knows of her and knows what she’s been experiencing in her life,” she continues. “Couple that with the fact that she’s obsessive-compulsive, and then people start to check off mental boxes in their head, as well as on the chart in front of them, which takes them completely away from the physical symptoms that she walked in with!”

As you’d expect, that drives Bailey mad. “Absolutely!” the actress laughs. “If anyone had walked into Grey Sloan saying these things, they would have been treated accordingly. So she has no understanding for why that isn’t happening at Seattle Pres. But it’s not until she’s in that situation with no advocate with her that her true understanding of the dilemma comes in.

“That’s why it’s always so important to have someone with you when you walk into an ER,” she continues. “Sometimes, when you’re in pain, it can be difficult to articulate that without having someone with you to corroborate what’s happening.” 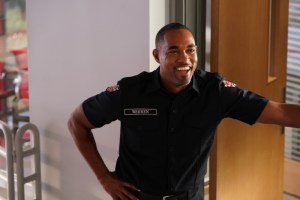 At a time like that, Bailey might want to lean on her husband, at least a little. Unfortunately, “Ben is in the naughty chair as far as she is concerned!” says Wilson. “She’s still not holding back her feelings about him simply deciding to make a career change. She expects everything around her to be as consistent as she is unless there is some kind of emergency.

“This career change is not an emergency,” she adds, “so he doesn’t get to be in the circle of trust right now!”

Which is a shame, because a little TLC — as well as the kind of treatment she’d get at Grey Sloan — may be exactly what the doctor ordered. “When your day starts off and you have no intention of dying, then all of a sudden your mortality is in your face, you can’t help but think about it,” Wilson admits. “But that wasn’t Bailey’s plan. The plan was to just go in and get checked, then come up with whatever the next plan was. The plan wasn’t to have a heart procedure done!”