Hell hath no fury like a Postal Inspection Service employee scorned. And hormonal.

So now that The Detour‘s Edie a) has a bead on where the Parker family is hiding out and b) is under the very strong influence of fertility drugs as she attempts to conceive, prepare for a rather emotionally unbalanced reckoning, recently promoted series regular Laura Benanti tells TVLine.

Memories from the Set: Laura Benanti 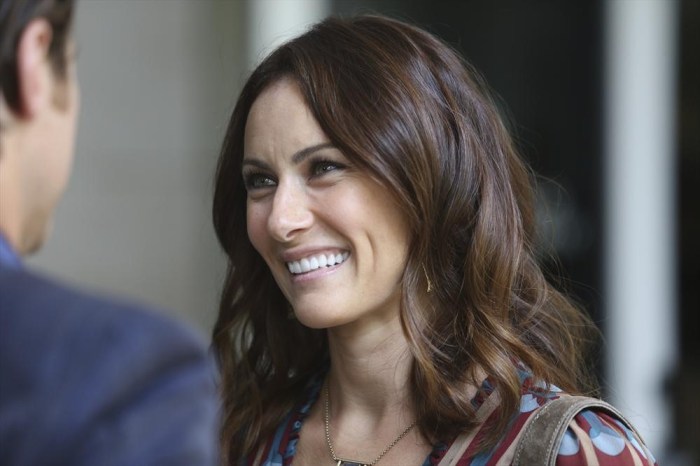 “Edie is discharged from the Postal Inspection Service, because she’s terrible at her job,” she says, laughing. “But then she becomes obsessed with the family, so she takes it upon herself to follow them to Alaska. She is determined to take them down.”

Edie’s single-mindedness builds in tonight’s episode (TBS, 10:30/9:30c) and flowers in the Feb. 6 installment, which finds her surveilling Nate & Co. as she tries to figure out which Parker is the dumbest, and therefore the easiest to make her pawn. As you can imagine, it’s not too tough a gig.

“At the end of the season, you find out why she’s so obsessed with them, and it’s a pretty great twist,” Benanti adds.

Read on for more of the Tony winner’s thoughts on why her latest gig is “my favorite TV show I’ve ever been on,” as well as a She Loves Me scene from the Great Performances live broadcast that made her a little queasy.

TVLINE | You and your family moved temporarily to shoot this season of The Detour, right?
We did [relocate]. For six weeks, we lived in Calgary, which is two hours earlier [than New York]. So [my daughter] Ella was like, “Good morning! It’s 3 a.m.!” Which was a little bit of a nightmare. But it is my favorite TV show I’ve ever been on. It was so much fun. The writing is so hilarious, and the people in charge of it are just human beings, which is so nice and refreshing. I just had such a good time. The writing is so funny that you don’t even need to improv, but when you do, they’re so open to it. Which I really appreciate. They don’t always use it, but it still makes it fun, you know? They’re just such a nice group of people and such talented actors. It was just a really great experience.

TVLINE | How cool that you can be a series regular now on a show but still be available to do other series.
It’s amazing. I mean, if you’re on NBC or CBS, you’re 22 episodes, so that’s all you can do. But if there’s only 10 or 12 episodes in a season, you can do other things. I just feel so lucky that I was able to have a baby, do concerts, do this hilarious television show and be on Broadway. 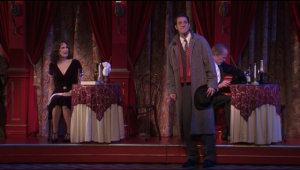 TVLINE | Speaking of which, I was able to catch PBS’ rebroadcast of the live She Loves Me, which I loved.
I was pregnant with Ella. I was in my first trimester. I thought I was going to die.

TVLINE | I remember seeing your tweets about puking during performances.
I threw up in my own mouth! In the scene where I’m waiting for him at the café, I puked in my own mouth and swallowed it. And you can see it. If you now know and go look, you’ll go, “Oh yeah, you did.”

TVLINE | How did you sing after that?! So much acid in your throat!
It’s hard. It was really hard. Yeah, man, it was a really rough time.