When technology advances to the point that death is more a minor inconvenience and less a consciousness-ending blow, humans will have the theoretical ability to live forever. But Altered Carbon, Netflix’s optically impressive yet frustratingly off-balance new drama, makes a convincing argument that we probably shouldn’t.

The sci-fi series, which begins streaming its entire first season on Friday, Feb. 2, is based on Richard K. Morgan’s 2002 novel of the same name and takes place in a far-flung future in which the totality of a person’s existence — thoughts, memories, joys, sorrows, etc. — is stored in a disc-shaped “stack” implanted in the spinal column. When bodies (or “sleeves,” in the show’s terminology) become sick or hurt or simply fall out of fashion, stacks can be transferred into new vessels as easily as slipping a BluRay disc into its player.

Joel Kinnaman (The Killing) stars as Takeshi Kovacs, a taciturn former soldier and revolutionary whose stack was shelved for centuries after his rebellion to destroy  artificial immortality was quashed. He’s installed into a new sleeve at the behest of Laurens Bancroft (The Following‘s James Purefoy), an incredibly rich man who’s been around for a very long time and wants Kovacs to solve a recent murder: Bancroft’s own. (Confused? Understandable. Suffice to say, the series’ details about digital backups and transmitting data, both of which come into play in Bancroft’s offing, are too complex to go into here.)

The world into which Kovacs is unwillingly thrust is a dystopian take on San Francisco — now known as Bay City — where the ultra-wealthy have built their homes in the clouds while the poor and middle class make do on the planet’s now-dismal surface. The contrast between the rainy, bleak ground world and the sunlit aerials is illustrative of one of Altered Carbon‘s greatest strengths: The show just looks so damn cool.

Kinnaman lends Kovacs a deadpan weariness and menacing physicality that works well for the part; because the character is a trained killer who’s been around forever, there’s little that riles him up. And he’s paired well with Martha Higareda (Royal Pains) as Det. Kristin Ortega, a Bay City Police officer who’s so fed up with corruption, lies and loss that there’s little that doesn’t set her off. 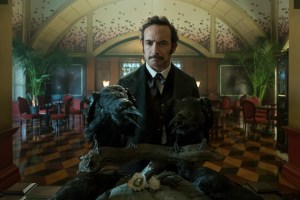 While Kovacs and Ortega are actively seeking the truth behind Bancroft’s mystifying death, Altered Carbon clicks along smartly. The fight sequences are sophisticated, if extremely bloody. Poe (American Crime Story‘s Chris Connor), an Artificial Intelligence character who doesn’t appear in the book, is a funny, captivating delight. And fragments of Kovacs’ revolutionary past — including his interaction with the firebrand Quell (Hamilton/One Life to Live‘s Renee Elise Goldsberry, playing up her regal bearing to great effect) — are sprinkled throughout, setting up a villain who appears about halfway through the 10-episode run.

But when the series gets too far away from the Bancroft investigation, Altered Carbon stumbles. The most noticeable instance of this arrives in a mid-season episode that focuses almost completely on Kovacs’ past as one of Quell’s rebels; why burn an entire episode on something we’ve been able to piece together quite easily from the flashbacks and dreams we’ve been given? 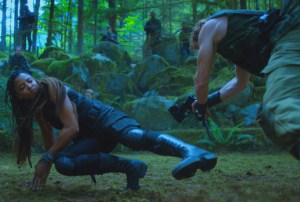 Another point of contention is the mixed signals some episodes send regarding truly terrible subject matter. Without spoiling too much, a significant chunk of the story’s action unfolds in or around brothels. Related: Yes, the prurient interests of horrifyingly depraved men are painted in the appropriate light, but isn’t it convenient that doing so offers numerous opportunities to depict nude women in highly violent scenarios? Similarly, if we already know a character is a zealot assassin capable of unspeakable cruelty, do we really need to see him murder an unsuspecting family, one by one, in their home?

Fortunately, the drama rights itself by the end of the season, returning to its whodunit? foundation in time to reward those who’ve been around for all 10 eps. But man, the boobs, blood and backstory digression it takes to get there!

THE TVLINE BOTTOM LINE: Gorgeous yet uneven, Altered Carbon is carried by the strength of its cast and its stunning visuals, but story pacing is a definite glitch in this matrix.