So all those twists and turns Star Trek: Discovery threw at us last week? Just a warm-up, it seems, for this week’s galactically huge shocker.

We’re still in the mirror universe, and Burnham is still recovering from seeing her beloved Georgiou alive and well — albeit as a ruthless emperor. The Defiant data she got back to Saru reveals that there is a portal between this universe and theirs… but its exact coordinates are a mystery. So Burnham continues playing along, hauling Lorca away to Emperor Georgiou’s massive palace ship and handing him over for punishment. Georgiou is grateful, congratulating Burnham and inviting her to dinner: “There is so much to discuss. Everything will be the way it was, dear daughter.” (Ah, so she and Burnham are tight here, too? Some things never change… no matter what universe you’re in.) 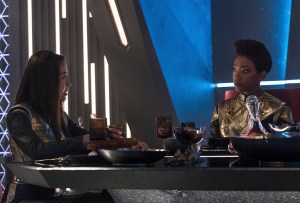 While Lorca suffers in the agonizer booth, Burnham and Georgiou dine on fresh Kelpien, with the emperor offering Burnham a taste of the delicious ganglia. (Oof, no one tell Saru.) But she doesn’t fully trust her “dear daughter,” either: She holds a knife to Burnham’s throat, accusing her of conspiring with Lorca to murder Georgiou and steal her throne. She formally charges her with treason, punishable by death, and even picks up a sword to do the deed herself… when Burnham confesses that she’s actually from a parallel universe. She has proof, too: the original Georgiou’s Starfleet insignia that Burnham carries with her. Once Georgiou confirms Burnham is telling the truth, she slaughters every witness in the room, except a single quivering henchman — a bit of overkill, no? — and is ready to talk shop with Burnham. 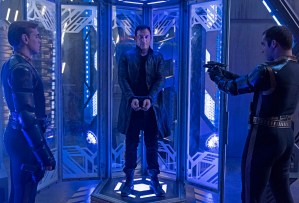 They agree to an exchange: Burnham gets the coordinates for the portal back home, and Georgiou gets access to the Discovery‘s spore drive schematics. But she is wary of putting Burnham and Lorca together again: Mirror Burnham ditched her for mirror Lorca, she explains. “He groomed you,” she smiles… and Burnham notices Georgiou’s eyes are sensitive to light, like Lorca’s are. Like everyone in the mirror universe’s are… wait, Lorca has been mirror Lorca this whole time?? Burnham is stunned as she pieces it all together: “He needed me to get to you. None of this was an accident.” And Lorca confirms it, killing a guard after admitting he killed his sister, too, back in his mirror-universe days. Man… is there anyone who isn’t secretly evil around here? 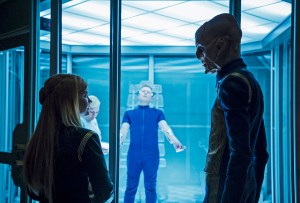 STAMETS IN MUSHROOM-LAND | Still in his psychedelic spore-induced haze, Stamets runs into his mirror doppelganger, who also happens to be in a coma. (What are the odds?) Stamets realizes he was having visions of the mirror universe earlier, seeing Tilly as captain before the Discovery crossed over. Mirror Stamets has developed a nasty-looking rash, though, from being in the mycelial network too long, and the network has weird corruptions in it, with a ship hallway that looks like a tentacled hellscape straight out of Stranger Things.

Stamets gets distracted when he notices his dead love Culber (!) wandering around in the background. He chases him down to their quarters, where Culber breaks it to him that he’s dead. (Stamets remembers holding him in his arms, but thought it was a dream.) Stamets is so excited to have him back, he even puts on an aria that he hates, but Culber loves: “Please let it be the way it was.” Culber tells him he has to open his eyes to fix this, and though Stamets doesn’t want to leave him, Culber assures him: “Nothing in here is ever truly gone.” With that, Stamets finally snaps out of his coma… and sees his lab has been overrun by a tangle of mycelial branches. Anyone got the number of a good space landscaper?

* I’m so puzzled by L’Rell’s actions this week: Not only did she explain to Saru the Klingons’ entire plan to place Voq’s consciousness inside Tyler’s body — the original Tyler was killed in battle, we learn, and the Klingons cloned him as a vehicle for Voq — but she also helped them undo the procedure and extract the real Tyler? I know Tyler/Voq was critically wounded, but wouldn’t a Klingon rather die a million deaths than aid a sworn enemy? That change of heart just doesn’t compute… unless this is all part of her evil plan.

* I’m now trying to think back to Lorca’s decisions all season long, and how they must’ve come from an evil mirror version of him. It does explain him breaking with protocol to put convicted mutineer Burnham on his ship… but what did he do with the real Lorca? Is he dead, or just stuffed in a closet somewhere?

* This episode was short, huh? Just 37 minutes. Guess they wanted to give us an extra ten minutes to pick our jaws up off the floor after that Lorca reveal.

Got thoughts on tonight’s Star Trek: Discovery — and evil Lorca? Beam down to the comments.