Wow, this week’s Star Trek: Discovery was just overflowing with fun twists and turns, wasn’t it? (It was so jam-packed with revelations, it almost felt like a season finale.) No time to stroke our evil goatees and contemplate, though; let’s dive right in!

Burnham is still aboard the mirror-universe Shenzou and wondering how long she can keep up this ruse, watching disobedient crew members get sentenced to death and transported out into the void of space. Plus, she can’t figure out a way to transmit the Defiant data (that could help them get home) back to the Discovery. The delicate sponge baths administered by a meek, subservient mirror Saru do help, though, and Tyler reassures her that he’s there for her, just like she’s always been there for him: “You’re my tether. You bring me back.” She still doesn’t know exactly who she’s tethered to, though, does she? 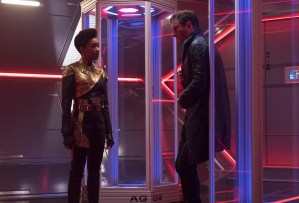 Soon, she’s given a new mission by the Terran Empire: Find a Klingon resistance leader known as the “Fire Wolf,” and exterminate him. Burnham consults with Lorca, who urges her to play along, but she wants to find out how Klingons managed to join forces with Vulcans and other races: “Don’t force me to slaughter this coalition of hope.” So instead of just bombing the heck out of them from above, she and Tyler beam down to the planet themselves, and are quickly taken into custody by Klingon, Vulcan and Andorian rebels. Burnham and Tyler are brought back to the rebel base, where they meet “Fire Wolf”… and surprise, it’s Voq, the white-skinned Klingon who conspired with L’Rell earlier this season! 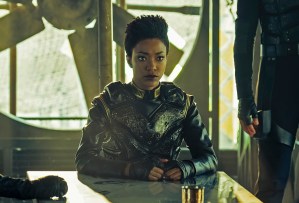 Burnham sits down to negotiate, assuring Voq that she’s only there to make peace, and even offering to evacuate the rebels before destroying the base. Voq doesn’t trust her, and turns to someone he calls “The Prophet” for confirmation… and it’s Sarek! With a goatee! (He is Spock’s father, after all.) Evil Sarek mindmelds with Burnham to see if she’s being truthful, and after seeing flashbacks to her childhood raised by the real Sarek, reports to Voq that “she means us no harm.” So it’s settled, right? Well, not exactly, because Voq’s presence and his Klingon words are triggering Tyler’s PTSD. Tyler finally snaps and lunges at Voq with a blade before being subdued. Way to almost wreck the mission, buddy.

After escaping with Tyler back to the mirror Discovery, Burnham confronts him, demanding to know what the hell happened down there. He admits he has a strange connection with L’Rell, and it’s more than just brainwashing, as we see graphic flashbacks to Tyler undergoing excruciating surgery… along with Voq? “I don’t think I’m Ash Tyler, Starfleet lieutenant,” he confesses. “Not anymore.” Seeing Voq face-to-face brought it all flooding back to him: “I have the human’s face, but inside, I remain Klingon.” Suddenly, he’s speaking with Voq’s voice (!) and confessing to killing Culber, calling him “a necessary casualty.” Burnham’s eyes well up with tears as she points a phaser at Tyler, and he grabs her roughly by the throat… but just in the nick of time, mirror Saru barges in and effortlessly flings Tyler across the room, as guards stun him into submission.

Tyler is sentenced to death by transporter, and Burnham seems to go along with it as he’s beamed into space… but he’s quickly re-beamed aboard the “mirror” Discovery, where original Saru puts him in custody, ordering him to face a tribunal. Plus, Burnham tucked the Defiant data into one of Tyler’s pockets to get it back to the ship — so now they can work on getting home, right? Not so fast: Burnham learns that another Terran ship has targeted the rebel base before they had a chance to evacuate, and watches helplessly as the ship bombards the base with torpedoes. She gets a message from the Terrans’ “Emperor”… and it’s the mirror-universe version of Georgiou! Alive! And evil! (Am I about to run out of exclamation marks?!!!) “When I give an order, I do not expect to be ignored,” she tells Burnham — before ordering her to bow before her emperor. 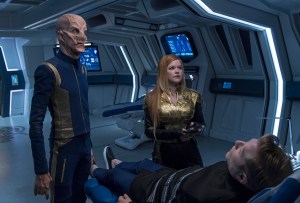 * Aboard the “mirror” Discovery, Saru and Tilly theorized that Stamets might’ve killed Culber (??), and Tilly had a whacked-out idea to use the mycelial spores to bring Stamets out of his coma. I can’t claim to follow half of what Tilly was saying, but basically, the spores can restore Stamets’ brain functions — or something. It seemed to work at first, but things went haywire, and doctors rushed in to save Stamets’ life… but they were too late. (Culber and Stamets, both dead in two weeks? C’mon!) Maybe not, though, because Stamets’ head did jerk up, and we saw him walking through a spore wonderland where he encountered… himself? (I’m clearly not doing enough hallucinogens to follow this storyline.)

* I knew we’d see a mirror-universe version of Georgiou at some point. (I even asked the showrunners about it last week.) Will Burnham even want to go home, now that she’s reunited with her beloved mentor — albeit a very evil version of her?

* So if I’m understanding Tyler’s situation — and I’m not sure I am — he underwent surgery to have Voq’s body parts and consciousness placed inside him, but some aspect of the original Tyler still remains? And the Voq side took over when he saw his mirror self? So can Burnham and Starfleet still find a way to extract the original Tyler? Or is their romance doomed?

* I’ve been puzzling over this for weeks, and it’s only underlined by the “mystery” surrounding who killed Culber: These Starfleet ships have all kinds of futuristic technology lying around… and yet they don’t have simple security cameras?

* Nice to see the blue-skinned, antennaed Andorians at the rebel base, who date back to the original Trek series.

* Speaking of puzzling technology: We’re in the 23rd century, and we’re still using old-fashioned defibrillators to revive a dying man like Stamets?