What part of the universe — or which universe — did the Star Trek: Discovery crew find themselves in now… and who didn’t survive the trip?

Sunday’s winter premiere picked up right where we left off, with a botched spore-drive jump landing the Discovery in an unknown quadrant of space. The crew soon discovered they’re stuck in a parallel universe — the same “mirror universe” that Captain Kirk encountered in the classic Trek episode “Mirror, Mirror.” (You know, the one where a goateed alt-Spock taught us that all facial hair is evil.)

Here, the ruthless Terran Empire replaces Starfleet, ruling the universe with brutal efficiency — and meek Tilly is actually the ship’s bloodthirsty captain! But we also learned that Lt. Tyler’s PTSD is tied to an alternate Klingon personality living inside his body… and that personality came out when Dr. Culber challenged him, with Tyler killing Culber with a quick snap of his neck.

To make sense of all this, TVLine reached out to Discovery showrunners Gretchen J. Berg and Aaron Harberts, who reassured us that Sunday’s episode “won’t be the last we see Culber.” Plus, they hint at a Trekkie-friendly Easter egg coming up next week, explain why Tilly was the perfect choice to be the mirror-universe captain and drop hints about what to expect for the rest of the season. 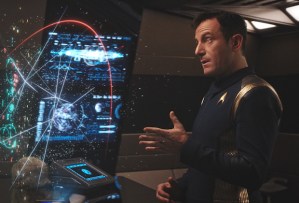 TVLINE | The mirror universe is a huge part of Trek mythology, dating back to the original series. How early on in the writing process did you know you wanted to go there?
GRETCHEN J. BERG | I think pretty much from the beginning.

AARON HARBERTS | Yeah, the biggest thing, frankly, was when we were going to do it. Initially, plans had been hatched to go over there in Episode 5, and we realized as we were talking about it: The mirror universe only works when you can care about the characters enough in the prime universe, so you can uncover the discovery of who people are in the alternate universe. So we realized that the mirror universe really needed to play in the back half of the [season], that it really needed to anchor the last several episodes.

TVLINE | This is the same mirror universe from “Mirror, Mirror,” with the salutes and the uniforms. Are there any other Easter eggs in there? I didn’t notice anyone with a goatee…
BERG | [Laughs] Ah! Well, are you looking for a goatee?

HARBERTS | Yes, then we will have, hopefully, an exciting Easter egg in Episode 11.

TVLINE | Is it giving away too much to ask if we’ll see a mirror Georgiou?
BERG | I find your question very interesting, but that’s a “no comment.” [Laughs] 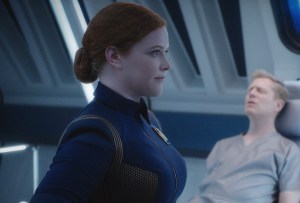 TVLINE | Making Tilly the captain was such an inspired stroke of storytelling. How much did Mary Wiseman enjoy that twist?
HARBERTS | [Laughs] The thing that was fun is, we always knew we were going to do it. The gift that we’ve been given from CBS All Access was to allow this to be so serialized. So Tilly says “I’m going to be a captain someday” the first time we meet her. So we knew: “Mary, guess what? In the mirror universe, you’re going to be a captain!” Mary is super-dry and super-sassy, so whenever she would cop a little ‘tude — and I mean that in the most playful of ways, because we have fun and just go at each other — it would just be like, “Yeah, that’s really mirror-universe Tilly. Save that for the mirror universe!” I think she had a ball. When she takes charge of that bridge, it’s just a testament to how great she is as an actor. She can go from comedic to downright scary to fighting both instincts. She’s just truly gifted. 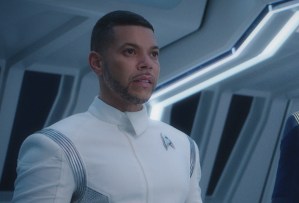 TVLINE | We did witness Dr. Culber’s death as well, when Tyler’s alternate personality came out. What’s the fallout going to be from that when the crew returns to the ship?
BERG | There are so many things that are set off or started in Episode 10… there are ramifications for every action. It is a huge thing. And it’s heartbreaking, and horrifying.

HARBERTS | One of the early bits of feedback about Discovery is that it’s very dark, and very bleak. And I don’t necessarily believe that that’s true, because we know where the show is going. But I do think that scenes of forgiveness and atonement and redemption are really important in Star Trek, and we’re going to have to take that journey. On our show, no one is ever truly a villain, and no one is ever truly a perfect person. And what’s beautiful about Shazad [Latif]’s performance is, you see just how shocked and horrified he is by his actions.

BERG | He is struggling with what’s going on within him.

HARBERTS | And he is in love with Michael Burnham, and he is desperate to protect her and this crew, who he feels has given him so much. Some people have said, “Once people see Episode 10, they’re gonna hate Tyler.” And my take on that is: I really hope not, because the humanity that Shazad brings to this and the struggle that that character is going through, you can’t help but have empathy. There are so many different fronts. How is Stamets going to react? How is Burnham going to react? What will the crew say? And what will Tyler himself do when this truth comes out about him? There’s a lot going on. This is a sophisticated audience. Our audience likes nuance, and that’s what we’re trying to serve up. 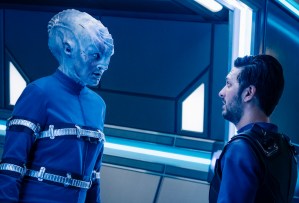 TVLINE | What else is coming up in the rest of this season? Is Tyler’s alternate personality kind of the ticking time bomb that could derail this entire mission?
BERG | It’s looming pretty large, and it’s a huge complication to what is going on, not only personally with Burnham and everybody else.

HARBERTS | If your psyche is hanging by a thread, maybe the last thing you want to do is go on an away mission to the Terran Empire. [Laughs] What you don’t need is more stress.

BERG | Where is the couch and afghan you can climb under? They don’t have one! I would say, also, as shocking as the death of Culber is that you just witnessed at the hands of Tyler, Culber and Stamets have been in a relationship that… sort of represents the epic love story of our series. And, you know, love overcomes all. I think you can count on that it won’t be the last we see Culber. You’ll see him again.

HARBERTS | This relationship between Stamets and Culber… this death is but the first chapter. The trope of “Bury Your Gays,” which is running rampant through our television landscape, that is not something that Star Trek has ever been interested in doing. I think we’ve shown by now that we’re not interested in tropes, and that we love our characters, and we love our actors. When you’re given the gift of Wilson Cruz and Anthony Rapp, and you’ve got several gay writers on staff, you don’t just throw that away. You will see Dr. Culber again. This is a love story that’s going to transcend death, and there is much more story to tell for those two. And the science that [the real-life mycologist] Paul Stamets has provided as a backdrop for our fictional Paul Stamets, and for our show… if the audience is concerned about what’s going to happen to Culber, dig deeper into the science of the mycelial network. There are so many clues in there.

Alright, Trek fans: What did you think of Discovery‘s trip to the mirror universe — and Culber’s untimely death? Hit the comments below to share your reactions.