There’s a little something for everyone as Fox’s recently renewed The Gifted brings its freshman run to a close on Monday, with a two-hour finale starting at 8/7c.

“The finale is insane,” reports Skyler Samuels, who pulls triple duty as Frost sisters Esme, Phoebe and Sophie. “We have a lot of epic fights that happen… not everybody makes it… and it takes some really dark twists. I think people will be pleasantly surprised, if not a little shocked.”

The season-ender opens with Johnny, Marcos, Lorna, Clarice and Esme attempting to whisk Dr. Campbell away from an anti-mutant summit before he can escalate the Hound program. The Strucker family meanwhile endeavors to protect one of their own when a missing piece of Otto’s work on suppressing the X-gene becomes Priority One. 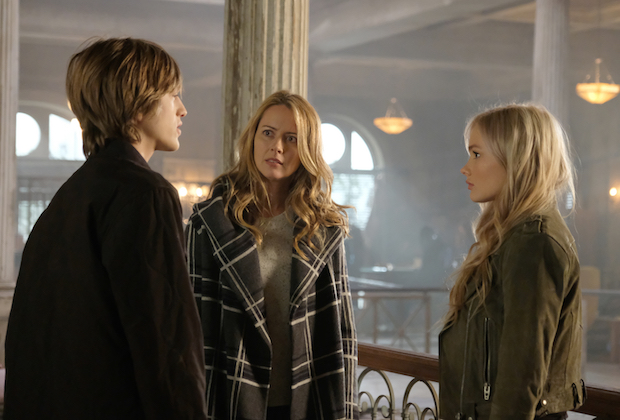 In the back half of the finale, with the mutant underground leaders otherwise occupied, the Struckers must hold down the fort when Sentinel Services — armed with paired Hounds — come rudely knocking on the way station’s front door.

For Caitlin, Reed, Andy and Lauren, “There’s some fun stuff ahead,” shares Amy Acker. Working alongside any remaining combat-ready mutants, “The family is left to defend the headquarters, and we get to have some really exciting moments as everything is crumbling around us.”

In fact, “I get to shoot a gun,” the erstwhile Person of Interest pistol-packer adds, “so that’s exciting!”

Amidst it all, the Frosts remain a bit of an X-factor, driven as they are by an agenda in support of the Hellfire Club and its hardcore tactics. (There’s also this moment, as first revealed by a provocative TVLine First Look.)

“There’s a moment in the finale where we realize just how far Esme and the Frost sisters will go to get what they want done,” Samuels teases. “It’s perhaps the most manipulative we’ve seen them yet, and it’s sort of an, ‘Oh damn‘ moment, which is fun and juicy.” Adds Acker: “You see characters make decisions that surprise us.”

Thankfully, The Gifted already has that Season 2 order, since the finale builds to quite the game-changing cliffhanger. “How could it not!” says Samuels, who is on track for a promotion to series regular. “What it does is set us up really nicely for Season 2, which is going to be very conflict-driven.

“If we were going into battle in Season 1,” she warns, “Season 2 is a war.” (With reporting by Vlada Gelman)