Where can you see the first official trailer for Alan Ball’s new HBO twisty, dysfunctional family drama? Here and Now.

The premium cabler released the promo Friday, formally introducing viewers to the Bayer-Boatwrights (played by Top of the Lake‘s Holly Hunter and The Brink‘s Tim Robbins) and their four children, three of whom are adopted and have Colombian, Somalian and Vietnamese backgrounds. As the video shows, the dysfunctional family’s life gets even weirder when one of the kids starts to see things that other people can’t.

The cast includes Jerrika Hinton (Grey’s Anatomy), whose Ashley — one of the adopted siblings — runs an online fashion shopping site and who is beginning to struggle with her cultural identity.

“So much hatred going around. It feels like the world’s falling apart,” Robbins’ character notes at one point in the clip. Translation: If you’re looking for light, escapist fare… this ain’t it.

As the kids are introduced, we watch Ramon (Daniel Zovatto, Fear the Walking Dead) insist that “something is trying to communicate with me,” and Hunter’s character Audrey insists that her son might be losing his mind. “We can’t just do nothing,” she says.

There’s also sex! Waterfalls! Gunfire! Large game animals! Multiple discussions of race and how it plays out within the microcosm of the family!

Scroll down to see Here and Now‘s poster (click on image to see it larger), press PLAY on the video above to see what the show is all about, then hit the comments: Are you planning to watch? 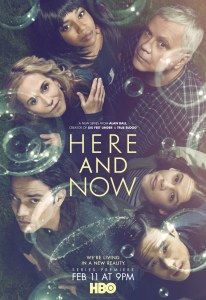