Cheers drinkslinger and Good Place Architect Ted Danson will undergo a thespian rite of passage tonight on Bravo: being grilled by James Lipton for an episode of Inside the Actors Studio.

The interview, filmed before a live audience in New York in December, covers Danson’s 40-year career in television and movies. TVLine was on hand for the taping, which ran more than two hours (!) and was later edited to fit Studio‘s one-hour runtime. Because we haven’t seen a screener, we’re not sure exactly what did or didn’t make the cut. But because we know you love The Good Place… and Cheers… and Bored to Death… and many of Danson’s other series as much as we do, we thought we’d give you a little taste of the taping’s best TV-related bits.

Read on for a taste of Danson’s thoughts on:

SOMETHING ABOUT AMELIA | Danson starred opposite Glenn Close in the 1984 made-for-TV movie about a family ripped apart by incest, and won a Golden Globe for playing the family’s guilty father. It was a controversial project that earned rather high ratings, but Danson says, “to me, it was just another wonderful script.” 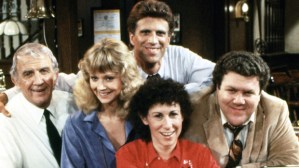 CHEERS | “It changed my life completely,” Danson says of the iconic NBC comedy, which ran from 1982 to 1993 and made him a star. Though known for their laughs, Sam, Norm, Diane & Co. “all had our wounds. We were a bunch of losers that found comfort in each other’s company,” he says. “That’s what I always loved about this show, that it was always rooted in this sadness.” Other salient info: Danson credits co-star Shelley Long with helping him nab the part when the casting process was down to three Sams and Dianes, and he calls Carla Sam’s “soulmate.” (Oh, and the fight/kiss in the office is Danson’s favorite scene, too.) (Watch a clip of Danson talking about Cheers with Lipton here.)

BORED TO DEATH | The Jonathan Ames-created HBO comedy starring Jason Schwartzman as an amateur private detective “was really a love story to Brooklyn,” Danson muses, calling Ames a poetic genius yet “there’s not a perversion he hasn’t leapt into, feet first.” The quirky, short-lived series, he adds, was “one of my favorite things I’ve ever been in.” 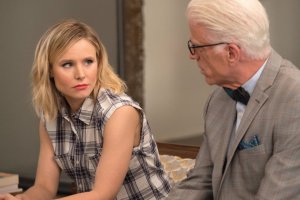 THE GOOD PLACE | Danson’s current gig on the NBC comedy deals largely with ethics, but “wraps it in this 9-year-old fart humor,” he says, chuckling. He adds that he and co-star Kristen Bell are “buddies,” and they were two of the very few people on set who knew about the Season 1-ending twist from the start because series creator Michael Schur “wanted it to be a close-held secret.” At one point, Lipton draws specific attention to Danson’s Season 1 performance, saying that playing the twist for so long without tipping off viewers was a task Danson handled masterfully.

Danson’s Inside the Actors Studio episode airs tonight at 8/7c on Bravo.