In the world of Altered Carbon, Netflix’s upcoming sci-fi drama starring The Killing‘s Joel Kinnaman, humans shed their bodies “as a snake sheds its skin,” the series official trailer informs us. No wonder, then, that these characters go all in when it comes to battle: What are a few mortal injuries when you can just upload your consciousness into a fresh new body, or “sleeve”? 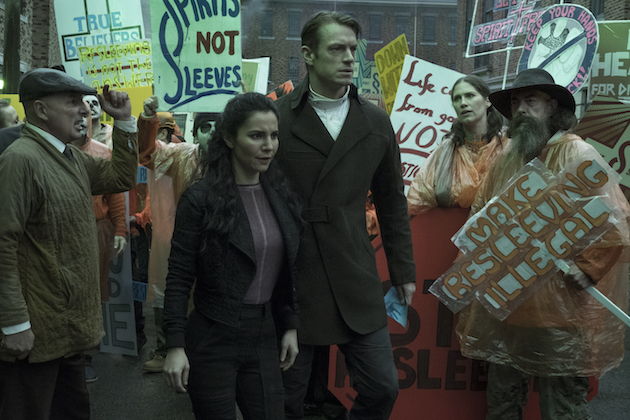 The promo, released Thursday, offers an in-depth look at the dystopian future in which Kinnaman’s Takeshi Kovacs is reanimated after a 250-year period on ice. He’s a highly trained warrior brought back to solve the murder of Laurens Bancroft (played by The Following‘s James Purefoy)… and he’s hired by Bancroft, who has neatly installed his mind, memories and such into another sleeve.

“I’m gonna need access that you don’t want to give. And I’m going to find answers that you may only think you want,” Kovacs warns him, but gets an equally worrisome response from Bancroft: “If you don’t solve this quickly enough, I will erase you.”

As if that’s not enough pressure, Kovacs frequently finds himself at the center of some really big (and also visually stunning) violence. But, eyes on the prize: “There’s more here than you’re willing to see,” a master strategist/rebellion leader named Quellcrist Falconer (One Life to Live‘s Reneé Elise Goldsberry) advises Kovacs. “The mystery needs to be solved.”

All 10 episodes of Altered Carbon, based on Richard K. Morgan’s novel, will begin streaming on Friday, Feb. 2. Scroll down to see the series’ poster (click on the image to see it larger), then press PLAY on the video above to check out the trailer. 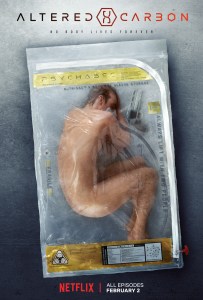