Since The Lone Gunmen are (sniff!) no longer around to deliver the capital-T Truth, fellow devotees of The X-Files, I’m going to step up. It is with heavy heart that I inform you that the first episode of the sci-fi drama’s Season 11 is like Eddie Van Blundht’s version of Mulder: It sounds a lot like the entity we know and love, but really just turns out to be bloated and a little dumb.

I KNOW. But before you sacrifice yourself to a soul eater in protest, hear this: I’ve seen the next four episodes and can promise you that they’re much better — in fact, three of ’em are really, really good — so all we have to do is get through this first hour before we can fully enjoy the ongoing adventures of moose and squirrel. Are you with me?

If so (or, honestly, even if not), read on as we review the highlights of a really long car commercial “My Struggle III.” 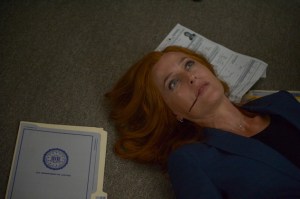 SCULLY DOWN! | The episode opens with a voiceover from Cigarette Smoking Man, who informs us that his real name is Karl Gerhard Bush, “but I’ve been known by many aliases during my long career with the U.S. government,” he says. As we watch video of him with a bunch of American presidents, including the current one, as well as footage of white supremacy rallies and nuclear explosions, it becomes even clearer: CSM is responsible for every single bad thing that has happened in/around the country in the last 50 years. He mentions fathering Mulder and Jeffrey Spender, and asserts that he’s not a bad man, “more a practical man” who did what had to be done — including fake the moon landing.

From there, we go to a bunch of flashbacks to the Season 10 finale — plague, dying Mulder, alien space beam boring down on the traffic-covered bridge — only now it seems as though the entire thing was a vision Scully had. And when it happens while she’s in the basement office with Mulder, she has a seizure and passes out. After EMTs come to take her (Side note: After the events of X-Files: Fight the Future, why would Mulder ever let unknown uniformed people take Scully anywhere without his riding shotgun?!), Mulder and Skinner rush to the hospital. Scully’s doctor says a comatose Scully’s brain is going insane with activity; as they watch her fMRI scan, Skinner recognizes that her fight-or-flight center is flashing Morse code for “Find him.”

Walter is sure she’s asking for their son. Mulder scoffs, saying he only wants to talk to Scully when she wakes up. “Hey, I care about her, too,” Skinner says, and Mulder is being a jerk to his boss but sweet where Scully is concerned, so I’m torn here, guys. Then, in a voiceover, Mulder talks about how tough it is when “the person you care for most in the world” is in peril, possibly because of something he did, then wonders how he can make it stop. Doing emotional/logistical gymnastics to somehow make Scully’s crisis about himself? Ah, this is how I remember my Mulder.

ROLE REVERSAL | Meanwhile, Scully wakes up and breathily orders Mulder to find Cigarette Smoking Man, even though he’s supposed to be dead, in Spartanburg, S.C. “I’ve seen it. I know how it begins,” she says, laying out the viral outbreak and how he’ll succumb. “I can’t save you, not without stem cells from our son.” But Mulder is unconvinced. “It’s me, Mulder,” she says, desperate. “I’m not an irrational person. You have to find him, and you have to stop him before he kills you.” He goes all soft voice and says, “I’m going to talk to your doctor first,” and the look Scully shoots him as he walks away says, “What, do I need a diplomatic pouch or something? Because you took off for Tunguska on less.”

Meanwhile, in a nondescript parking garage, Jeffrey Spender takes out the garbage and is literally run over by a man gunning his car straight at the former FBI agent. Spender survives and manages to escape, but not before his pursuer yells, “Where’s the boy? All we want is the boy!” 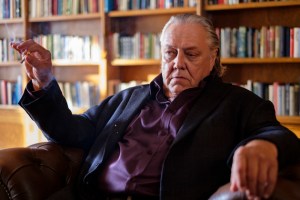 IT’S COMPLICATED | At the hospital, Scully’s doc is out-Scullying her, what with the medical jargon delivered in a flat, soft tone and saying things like, “Real is subjective,” and I absolutely love how it’s driving Dana bonkers. And when the physician mentions that she’s treated government test subjects who’ve had weird stuff happen to them, all of a sudden, Mulder is a firm believer that CSM tested something on Scully and her recent episodes are proof. So he does what he does best/most: He rushes off, half-cocked and indignant, to Find The Truth. (It doesn’t help that Spender calls him to report that William is in danger… nor that, unbeknownst to either of CSM’s kids, Ol’ Smoky is listening in on the voicemail.)

And that leads us to the WTF-iest section of this episode. In order not to have my head explode, I will present the salient details in quick hits, a la a Mulder slide show. Got your sunflower seeds ready? OK.

* Mulder realizes he’s being followed, so he engineers a car chase with a thug that’s following him, then winds up working it out so he’s following the guy that was chasing him. And somehow on the seven-hour drive to South Carolina, the guy doesn’t realize he’s being tailed. Related: The seven-hour drive feels like it plays out in REAL TIME. Geez louise, how many car glamour shots did Fox promise Ford in this episode?

* When he arrives at the house, it’s not CSM’s. Mulder finds a different, shady man smoking there. He’s pretty jowly, and because we don’t get his name, I’m going to call him Jowly. He’s accompanied by an “associate” whose name we also don’t get, but because she’s played by Barbara Hershey, I’m going to call her Hershey. Cool?

* Jowly and Hershey aren’t surprised when Mulder arrives. In fact, they’ve got an offer for him: They’re colonizing space, and if he kills CSM — whom they used to be allied with as part of The Syndicate, but now despise — they’ll bring Mulder and William with them when the planet (and the rest of humanity) dies a horrible death. 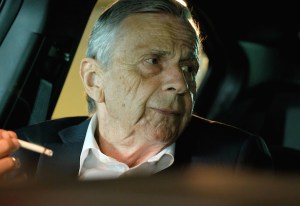 * Meanwhile, at CSM’s actual location, he and Reyes talk a whole lot of nonsense about how CSM wants “the beauty of a planet returned to its savage state” and how “you can’t stop what’s already begun” and how “I’ve endured more hatred than you’ll ever know. My enemies are legion.” (I’ve gotta give Chris Carter & Co. credit. Even when it is bat-crap crazy, this show can still crank out a gem of a line, can’t it?) Then Reyes says that CSM is in love with Scully, which is why he’ll never touch her or her son. Um, OK?

* Mulder turns down H&J, naturally, then gets back in his car and starts the seven-hour drive back. On no sleep. Or food. At his age. OK!

HURRY UP AND WAIT | Back at the hospital, Spender visits Scully to tell her about his attack. She makes him break the promise he once made her, demanding that he cough up William’s location. He barely gets out the kid’s new last name — Van De Kamp — before Scully is looking for her clothes and wondering where her shoes went, because she’s OUTTA there.

Except it’s a really bad idea to try to drive when you’re plagued by painful visions, which are starting to feature a teenage boy who appears to be having the same troubling episodes. So Scully passes out in her office, then again in her car. Luckily, Agent Einstein happens to be nearby when it happens, and she and Agent Miller — remember them? — bring Scully back to the hospital. And then the thug whom Mulder followed to Spartanburg shows up and tries to suffocate a sleeping Scully with a pillow.

She wakes up, they fight, and it looks like he’s going to succeed… until Mulder arrives in the nick of time to grab a scalpel and slash the guy’s throat, killing him. As the cops clean up the aftermath, our favorite agents sit in the hallway, processing the fact that there are two warring conspiracies afoot. Scully rather calmly informs Mulder that CSM will never hurt her and that he needs William for something, and no, she has no idea how she knows that. Mulder, who is used to being the one to pronounce something ridiculous and expect his partner to believe it as fact, doesn’t quite know what to do. But a suddenly zen Scully assures him that William is aware of what’s going on, and he’ll find them. They’ll just have to wait. 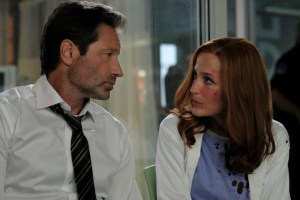 BIG LITTLE LIES? | Skinner eventually shows up, and when Mulder smells smoke on him, they get into a shoving match about how little Mulder and Scully can trust their boss. What we know, but Mulder doesn’t: While the thug was trying to eradicate Scully, Skinner was spending some quality time with Reyes and CSM, who’ve ambushed him with a meeting at gunpoint in his car. CSM reveals that he broke with The Syndicate over a difference of opinion about aliens, then pulls out a vial of the pathogen that will wipe out humanity. “You’re a party to this?” Skinner asks Reyes, who’s sitting in the backseat and says nothing. Whatever, cat person. CSM offers Skinner immunity from the coming plague, in exchange for locating William.

And why does CSM want William so badly? Well, the old man and Scully have history, he says as we watch clips from Season 7’s “En Ami,” aka the episode in which Scully willingly (and confoundingly) allows CSM to take her on a trip. Remember when she woke up and claimed he’d drugged her? And he denied it? Turns out, one of them was closer to the truth than the other.

“You impregnated her?” Skinner asks, and STOP IT! I HAVE NEVER IN MY LIFE YELLED AT MY TV LIKE THIS! WHEN MY MOTHER YELLS LIKE THIS IT’S BECAUSE SHE LOVES ME! Sorry. Let’s continue. You were saying, CSM? “With science, Mr. Skinner,” CSM calmly replies. “Alien science, to create the first superhuman child.”

Skinner looks like he just threw up in his mouth a little. Same, dude. “Who’s the father?” he whispers, horrified because he totally knows the answer already.

Our last shot is on the teenager we saw in Scully’s vision, howling and holding his head in pain.

Now it’s your turn. Grade the series’ return via the poll below, then hit the comments with your thoughts!