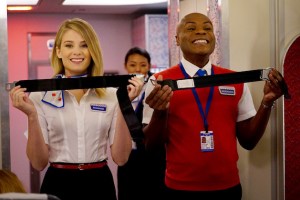 When Ronnie learns that a Delta job she’d applied to has gone to one of her fellow flight attendants, she resigns — mid-flight! — and proceeds to get drunk in the cabin while sitting next to a handsome, British passenger named Colin (The Mindy Project‘s Ed Weeks). They argue. They flirt. They eventually end up trying to join the Mile-High Club in the plane’s bathroom, an act thwarted by less-than-ideal conditions (“This is so much grosser than I ever imagined it would be,” Colin notes as he tries not to touch any surface) and by Capt. Dave knocking on the door and lecherously inquiring about their activities. 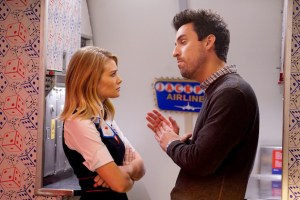 Though Colin promises to call Ronnie, he doesn’t. And at the end of the weekend, he’s surprised to see her working his return flight — she thought better of quitting, after all — and she’s surprised to see his wife (You’re the Worst‘s Kether Fernandez) board the flight with him. Long story short: Colin and his woman got hitched after a one-night stand turned into a pregnancy, and now they have a kid… but they’re separated.

The separation news softens Ronnie’s ire; moving forward, it looks like Colin and the flight attendant may have a thing starting up. And in case you were wondering what Capt. Dave has been up to during all of this: In the episode’s final moments, when a disgruntled groom-to-be threatens to “go Passenger 57” on the flight home, the pilot uses his oft-mentioned muay thai skills to subdue the man. With his thighs.

The cast also includes Peter Stormare (American Gods) as a sleazy bookie and Olivia Macklin (The Young Pope) as an enterprising exotic dancer.

Now we want to know what you thought. Grade the premiere via the poll below, then hit the comments to back up your choice!