Now that the broadcasters have completed their run of fresh episodes for the fall, let’s see how each network’s shows are stacking up thus far for the 2017-18 TV season, starting with ABC.

Listed below is the average Live+Same Day demo RATING for each ABC series. Beside that is the percent CHANGE versus each program’s previous full-season average (or its time slot predecessor’s performance, if noted to the right). The NOTES section also reminds of any time slot changes to keep in mind when eyeballing up/down movements. Each program’s RANK refers to perhaps the most critical measure — how it is faring compared to other shows on ABC, since come springtime heads must roll to make room for shiny-and-newish pilots.

THE TVLINE BOTTOM LINE: The Good Doctor aka the fall’s No. 1 new drama has cured what ailed ABC’s post-Dancing With the Stars time slot, while Grey’s Anatomy in Season 14 boasts steady vitals, replacing Modern Family as the network’s No. 1 returning show. On the down side, the Alphabet network can’t be happy with freshman hit Designated Survivor‘s Season 2 (dis)approval numbers, or How to Get Away With Murder‘s slide. Also, Sunday’s “75-percent reality” experiment was a ratings valley, setting up Kyra Sedgwick’s TV return for disappointment and further handicapping Once Upon a Time‘s “reboot” season with a new, Friday time slot (where it’s down 46 percent from its previous average). Somewhat amazingly but deservedly, S.H.I.E.L.D. thus far on Fridays is only off a tenth from Season 4. 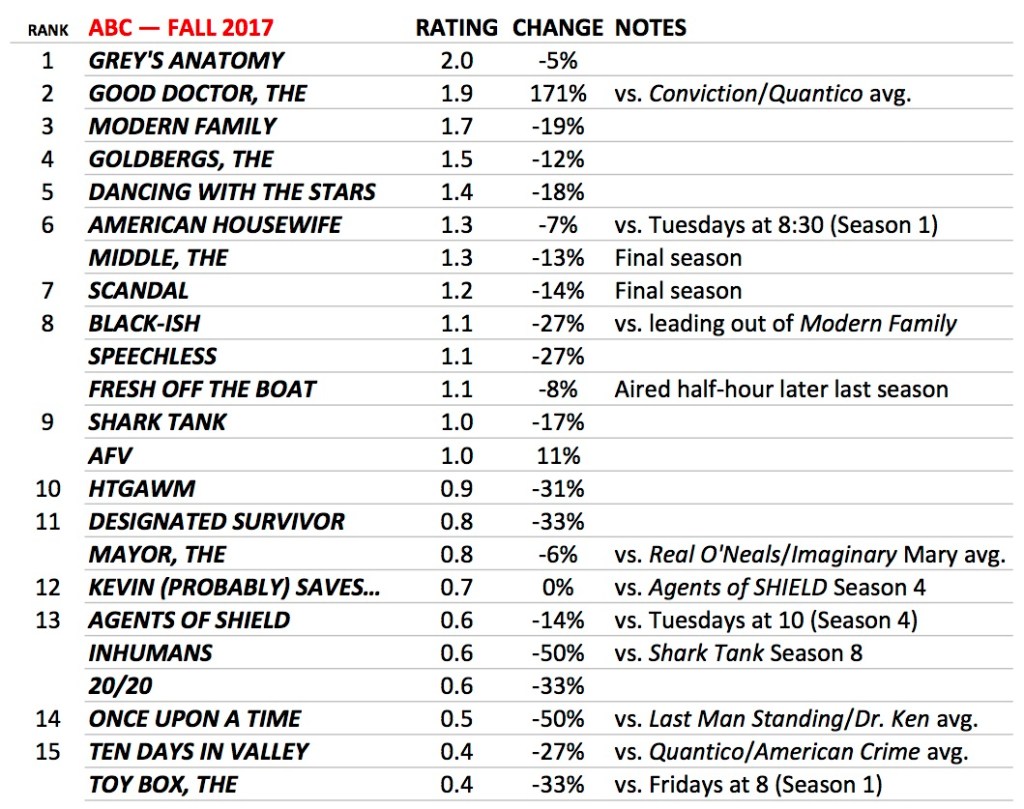