Mr. Robot‘s Elliot hatched a last-ditch plan this week to defeat the Dark Army — which proved all good things really do come in threes.

He wakes up from yet another Mr. Robot haze to find the words “THEY OWN THE FBI” scrawled on his bathroom mirror. (Who’s “they,” he wonders? The Dark Army?) We see that Mr. Robot went to Tyrell’s apartment the night before, getting into a fierce argument/fistfight with him that’s interrupted when Phillip Price waltzes in to inform Tyrell he is E Corp’s new CTO. It’s just a title, though, Price emphasizes: “Obedience will be your only task at my company.” Robot is left searching for a “vulnerability” in the Dark Army, and Tyrell has it: He tells Robot they have a mole inside the FBI. Hence, the scrawled message.

Elliot and Darlene meet up at the old arcade lair, and he shows her Trenton’s email about undoing the Five/Nine hack. Darlene says they could do it if they can access Romero’s key logs, but they’re being held on Sentinel, aka the FBI’s “Fort Knox” of a data server. Elliot assigns Darlene the task of finding a way inside Sentinel while he sets out to handle the Dark Army — which he does by telling Irving he needs a meeting with Whiterose to discuss Stage 3. Irving asks the same question we’re all asking: “The f—k is Stage 3?” 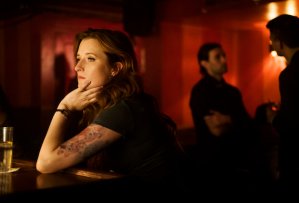 Darlene tells Elliot she has an “angle” into the FBI, and she means Dom, who she meets up with for a night of drinking and flirting. Darlene has a scanner stashed in her backpack, and brushes up against Dom’s FBI badge, but the scanner can’t get a reading. So they go back to Dom’s apartment, where the flirting turns into kissing — but Dom stashes her gun and badge in a safe before they head to the bedroom. In the morning, Darlene tries to sneak into the safe, but Dom catches her red-handed. So much for that romance.

Elliot gets his meeting, thanks to an assist from Leon. It’s not with Whiterose, though, but his right-hand man Grant (hey, I learned his name!), who wants Elliot to explain Stage 3. He offers to demonstrate on his laptop, but a Dark Army henchman just takes his laptop and inserts a flash drive to copy over all of his data. Elliot explains he wants to destroy E Corp by attacking their E Coin currency, but Grant isn’t interested and brushes him off. Elliot doesn’t seem all that disappointed, though…

Darlene, now stuck in an interrogation room with an angry Dom and Santiago, accuses the FBI of working with the Dark Army, and explains she needed access to Sentinel to undo the Five/Nine hack. Dom wants to let her try, with supervision, but Santiago — dragging his feet as always — says no and reassigns Dom. (Dom does finally seem suspicious of her boss, though.) Santiago also calls Irving and tells him about Darlene… which doesn’t sound like very good news for Darlene. 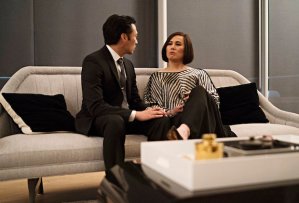 Grant reports back to Whiterose about Elliot and Stage 3, and adds that he thinks Elliot is now targeting the Dark Army. They agree that it’s time to delete Elliot’s file, as it were. (And they kiss!) But Elliot might be a step ahead of them: When the Dark Army copied over his laptop data, it included an exploit that allowed him to access their servers. There was no Stage 3; it was all a ruse. And as Elliot puts it, “now I own the Dark Army.”

* The episode opened with a flashback explaining how Allsafe came to handle E Corp’s security: Then-CTO Terry Colby laughed off their pitch — I had forgotten what a jerk that guy was — but Angela caught Phillip Price’s eye, and he ordered Colby to hire Allsafe, despite his objections. Hmmm… will Price’s obsession with Miss Moss be his ultimate undoing?

* Speaking of poor Angela: That girl went on full-on loony tunes this week, sharing her paranoid delusions with Elliot before retreating to her terrifying apartment, with hundred of photos taped to the wall, jugs of water everywhere and dirty dishes piled up in the sink. She packed up her possessions, ignoring calls from her dad, and pushed a cart through the streets like a bag lady until a van pulled over and a man in a suit told her to get in. And she was expecting them!

* A not-so-subtle swipe at our current president during that Robot/Tyrell argument, when Tyrell yelled: “No puppet! No puppet! You’re the puppet!”

* Gotta seriously question Dom’s judgment in falling for Darlene’s advances. She knows Darlene is a liar, and still, she fell for all that? She’s too good of an agent for that, right? Guess it does get pretty lonely spending every night with your Amazon Echo.

* Next week is the Season 3 finale, folks. Things I need to see: Elliot outsmarting the Dark Army; Dom wising up and exposing Santiago; a full and clear explanation of what Whiterose showed Angela; Darlene not dying; Leon sharing his thoughts on Friends.

Got thoughts on tonight’s Mr. Robot? Drop ’em in a comment below.