The more that I look back at the church wedding between The Flash‘s Barry and Iris, the more I think that what that “waitress” said to the groom — “Remember to say ‘I do'” — was at the very least a red herring, and possibly totally irrelevant.

No, I suspect her agenda was not to ensure a proper ceremony but something very different. Something… bigger.

Speculation, and thus possible spoilers, as to The Waitress’ true identity follow.

Played by Jessica Parker Kennedy (The Secret Circle), The Waitress is thought to be either of two Barry Allen descendants: Dawn Allen, his daughter with Iris (and twin sister of Don, both speedsters), or Dawn’s own daughter Jenni Ognats aka the Legion of Super-Heroes speedster XS. Either way, we are dealing with someone who was visiting from a future. And someone who will be seen again this TV season, TVLine has been assured. 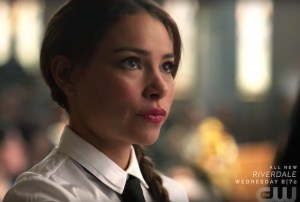 The Waitress was very stoked to be attending the WestAllen wedding, for reasons she was careful not to get into. Regarding the young woman, Barry wondered aloud if they had met before. She brushed that off, before touching his arm and advising, “Remember to say ‘I do.’” Which under any normal circumstance is a “ha-ha” thing to say to a groom before the ceremony starts… and yet The Waitress’ face (see right) turned decidedly serious while she made the comment.

As the “Crisis on Earth-X’ crossover came to a close, the knee-jerk reaction was to surmise that because Barry never said “I do” during his and Iris’ waterfront, double wedding (with Arrow’s Oliver and Felicity), he had run afoul of The Waitress’ advice/warning. But Barry never “forgot.” Because both when it was just Barry/Iris and moments later with Oliver/Felicity glomming onto the proceedings, Diggle never launched into the “Do you, Barry, take…?” boilerplate, so there was never an occasion to respond, “I do.” No, Dig each time went straight to “I now pronounce you….” Barry never slipped up. (And regardless, “Do you take…?”/”I do” is not a legally binding part of a wedding service, at all.)

Mucking up any speculation is The Waitress’ possible origins, being from a future. Does Dawn/Jenni hail from a timeline where the Earth-Xers didn’t crash the wedding, and as such did not know to warn the groom to whom she was gushing? Surely that battle would be something a daughter/grandkid hears lore about. Yet nothing about The Waitress’ disposition indicated she knew mayhem was imminent. Frankly, I don’t know what to do with that fact, if she is in fact a time-travelling descendant. So I am going to move on…. 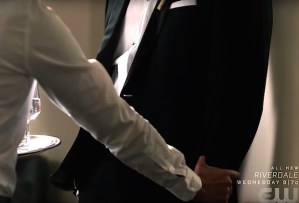 What I am instead going to direct your attention to is the touching of Barry’s arm, as seen in the photo at top and then zoomed in on via a close-up a moment later (see right) — meaning, the director wanted us to take note of this physical contact. No close-up is by accident, when every half-second is precious on a TV show. Kind of how during the waterfront wedding, the director made a point to zoom in on the decorative paper with Iris’ handwritten vows. She had already referred to them, yet someone thought it was important to show us the paper, up close.

What am I getting at, with the 280-plus characters above…?

For one, I don’t think The Waitress was advising Barry to say “I do” during the wedding. I think that, in the vein of the cryptic misdirects we get from, like, seers on Once Upon a Time, she was referring to some other, upcoming moment where he will have cause to say, “I do” (yet in her timeline he does not).

As for her touching Barry’s arm, I suspect that at some point down the road, when this young woman resurfaces and Barry himself perhaps speculates that she is kin, he will have Cisco “vibe” where she touched his tuxedo jacket. That — and/or The Waitress producing the yellowed/aged paper on which her mother/grandma wrote down her vows — will confirm her identity.

Rewatch the scene below (via Xoana Kozh) and share your current thinking on who The Waitress really is, and what her encounter with Barry was truly about.