The “Crisis on Earth-X” was brought to Earth-X this Tuesday night, as the back half of the Arrowverse’s two-night crossover event unfolded on The Flash and Legends of Tomorrow.

PART 3 | After getting bested by the Führer & Co. back on Earth-One, Oliver, Barry, Alex, Sara, Jefferson and Stein came to on Earth-X, inside the fence of a concentration camp. Though any powers had been dampened by high-tech collars, they attempted to overtake commandant Quentin-X, only to realize — because apparently no one ever saw “The Gamesters of Triskelion” — that the same gizmos around their necks also delivered debilitating electrical shocks. Along with a new acquaintance named Ray, the group was about to be felled by a firing squad when Earth-X’s kinder version of Captain Cold, Citizen Cold aka Leo Snart, arrived to save their bacon, with help from boyfriend Ray’s alter ego, dubbed… The Ray.

Leo led the group to the rebels’ lair aka Arrowcave-X, where Alex in particular was gobsmacked to meet their leader — General Winn Schott! Winn’s priority is to destroy the breach-type device the Führer has at his disposal, but Alex argues that she and her friends must first use it, in part to save their Kara, whom Earth-One’s Winn cares for very much. General Schott allows the noobs a brief window to infiltrate the Führer’s complex, which they do by having Oliver pose as his evil doppelgänger. Oliver plays along with Quentin-X, greenlighting the launch of the Evil Waverider carrying a WMD to Earth-One. But the jig is up soon enough when Oliver is invited to execute a young Jewish woman — Felicity-X! Oliver instead goes to turn the pistol on Quentin-X, only to discover it was never loaded.

A melee breaks out, and Sara, Alex and Firestorm join in. Meanwhile, The Flash and The Ray set out to stop Red Tornado, which had been deployed as scheduled by General Schott to destroy the portal. The duo have a tough go of it but eventually, combining a hurled bolt with a Ray blast, scuttle the human missile. Inside the complex, however, things are going less smoothly. After Firestorm separates to serve two separate purposes, Stein winds up taking a bullet. He manages to crawl closer to and flip the switch that opens the portal, but takes additional fire along the way. Jefferson merges with Stein to keep him barely alive, before returning to Earth-One with the others. 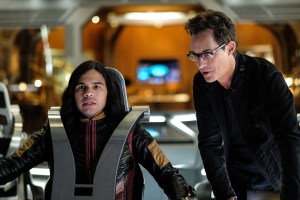 PART 4 | Aboard the Waverider, Stein and Jefferson’s fates remain tethered to one another, and Gideon is unable to remedy the situation. Meanwhile at S.T.A.R. Labs, Eobard Thawne has been using fabricated red sun rays to soften Kara up, so that she can be cut into and donate her heart to withering Overgirl. Unbeknownst to them, Felicity and Iris have been scampering around the air ducts McClane-style, unable to free the pipelined heroes but able to get an alert out to the Legends. And though the ladies get captured, later, just as Thawne puts scalpel to skin, he meets unexpected resistance — in the form of a miniaturized Atom! [And the crowd cheers.] Ray sizes up and KO’s the baddies, while Nate, Amaya and Zari go about freeing Cisco, Caitlin et al from the pipeline. That opens the door for a terrific team-up against Metallo, with rays/blasts attacking the robot from all directions. Meanwhile, a standoff between Oliver (with Kara-X at knifepoint) and Oliver-X (aiming an arrow at Felicity) is quickly ended when Dark Flash shows up to whisk away his cohorts.

Kara-X was loaded onto the Evil Waverider, where her deteriorating state put her at risk of exploding, which would not be a good thing for anyone, anywhere. Our Waverider in turn gave chase, piloted by Cisco, though its options were limited until the baddies’ shields could be shut down. To that end, Killer Frost created an ice ramp for her, Vixen and Zari to ride up and into, and seize control of, the Evil Waverider. Cisco then turned his controls over to Harry, so that he could breach the ladies back before the enemy ship went kaboom. Amid all this, Kara invited Overgirl into the sky for a fight. But when Kara-X headed toward countdown mode, Supergirl flew her up, up and away to safely explode.

On the ground, Oliver-X paused his tussle with Green Arrow to look to the sky and gasp in horror at his wife’s fate, allowing Oliver to put an arrow in the heart. Barry gained the upper, vibrating hand against Thawne, only to let his nemesis get away. Kara, KO’d by her doppelganger’s explosion, plummeted to the ground, but was safely caught by Steel. 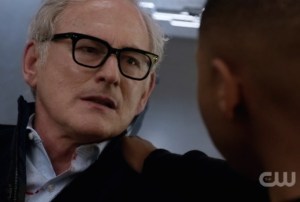 The heroes did suffer a loss of their own along the way, when a selfless Stein insisted that Jefferson take Cisco’s serum and thus untether their lives, allowing Grey to die. After Stein uses his last moments to thank his partner for “the adventure of a lifetime,” cue a gut-punch of a montage in which the Legends, Caitlin and others mourn their colleague. A bereft Jefferson delivered the news to Stein’s wife and daughter, after which they and the superfriends gathered for a funeral.

The heroes’ assorted good-byes begin with Ray Tiller, who winds up returning to Earth-X alone, after Leo decided to stay behind, leaving his beau with a sweet farewell kiss. Alex told Sara she’d take her advice and trust her instincts regarding the Maggie split, before wishing great love for her new friend. As the Danvers sisters bid the Earth-One gang adieu, the topic of Barry and Iris’ wedding came up. Iris said they planned to grab a justice of the peace and get it done down and dirty — but Oliver and Felicity offered to do them one better, by having Diggle, who’s ordained, officiate a wedding right then and there (after Barry fetched-and-wretched him). Just as Dig is about to declare WestAllen husband and wife, Felicity decides she wants in on the matrimonial action, and asks Oliver if he’ll still marry her — and he comes back with a quick yes. One quick rehash of Oliver’s fake-wedding vows later, and Diggle is pronouncing two couples to be lawfully wed. (Read more about that here.)

What did you think of the “Crisis on Earth-X” conclusion?