Warning: The following contains spoilers for Part 4 of “Crisis on Earth-X.”

Tuesday’s Arrowverse crossover conclusion attempted to make up for Part 1’s derailed wedding day with not one, but two newly hitched couples — but was the impromptu ceremony all that you hoped it would be?

While parting ways with the Danvers sisters, Iris reveals that in lieu of a big redo, she and Barry are just going to find a Justice of the Peace and and “get it done, quick and simple.” (While maybe not the most romantic plan, it does involve zero Earth-X Nazis.) Felicity then suggests that they could make it a little more personal by having someone they know officiate: Diggle, who got ordained to marry his brother and Carly. After getting a ride to Central City via Barry — and failing to not throw up —  Dig turns it over to the betrothed couple to exchange vows.

“I tried to write mine, but then I realized that I didn’t need to,” Barry begins. “My entire life has been marked by two things. The first one is change. From when I was a kid to when I was an adult, things were always changing. But no matter how different things became or what new challenges I had to face, I always had the other thing that my life was marked by. That’s you. You’ve always been there, as a friend, as a partner, as the love of my life. You’re my home, Iris, and that’s one thing that will never change.”

“That was really nice,” Iris responds with a nervous laugh before reading her hand-written vows. “When I was nine years old, I wanted to be a ballerina, remember, even though I was not a very good dancer. The day of the recital, I froze. I couldn’t move. And I wanted to die. Then I looked into the audience, and I saw you. You got up, and climbed up on the stage, and you did that whole routine with me. And we killed it! I mean, we brought the house down. And from that moment, I knew that with you by my side, anything was possible. The Flash may be the city’s hero, but you, Barry Allen, you’re my hero, and I am happy, excited and honored to be your wife,” she finishes with tears in her eyes.

Just as Dig is about to pronounce the pair husband and wife, Felicity interrupts and asks Oliver if he will marry her. While she still doesn’t believe in marriage, “I believe in you,” she tells her beau, “and I believe that no matter what life throws at us, our love can conquer it, married or unmarried. I love you. My greatest fear in life is losing you.” Oliver’s response is short but sweet: “Yes! I do.”

Oliver and Felicity forgo vows – “We can’t do better than them,” he explains – but he does echo his sentiments from the couple’s fake wedding in Season 4. “I remember saying something along the lines of, ‘You’re the very best part of me. Felicity, I’m a better human being just because I’ve loved you,'” Oliver improvs (because that’s not exactly what he said, but it’s still sweet). 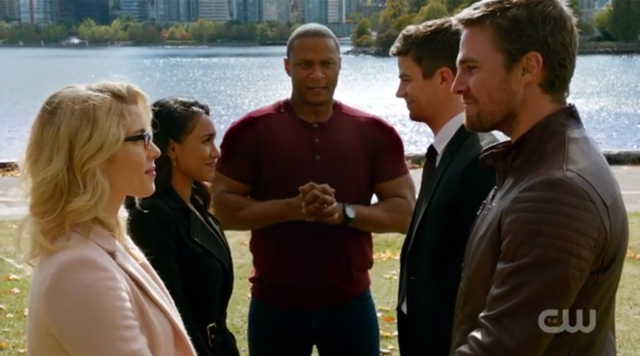 With that, the two couples became two happily married couples — but were you satisfied with the low-key nuptials? In addition to Oliver and Felicity strangely deciding not to exchange vows, most of the foursome’s friends and family were MIA, which was a little bit of a bummer. (Donna Smoak is not going to be happy.)

Also missing out: The mysterious waitress (played by Secret Circle‘s Jessica Parker Kennedy) who made quite an impression on viewers during Barry and Iris’ church ceremony, thanks to her striking resemblance to the bride and groom. Although she didn’t resurface during Parts 2-4, we will see the character again, TVLine has confirmed.

What did you think of the double wedding? And how do you think Kennedy will resurface? Grade the crossover, then hit the comments with your theories!