If anyone is going to have a harder time than the audience accepting the pairing of Grey’s Anatomy stepsiblings Jackson and Maggie, it’s her father, Richard. How will he react when he finds out about their growing interest in one another? “I’m trying not to think about that!” portrayer James Pickens Jr. told TVLine at the ABC drama’s recent 300th-episode celebration. “Leave it to Shonda [Rhimes, the series’ creator]. 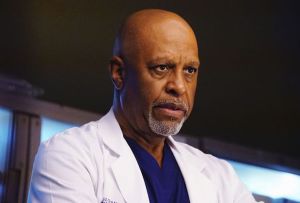 “I don’t want to divulge [too much],” he added, “but I think she’s setting it up to make a real hard left turn with this thing here.”

No matter the direction in which the show takes Jackson and Maggie’s flirtation, the actor hastened to reinforce that, although Richard and Catherine are married, their kids are not brother and sister. “Fans have to keep remembering that,” he said. “They’re not blood-related, so there’s nothing incestuous about it. It’s just that the dynamic is funny. It’s almost like double jeopardy or something.”

Whatever it is, Maggie is struggling with it, too. “It’s a lot for her to digest,” Kelly McCreary admitted at the same event. “She and Jackson just met, really. They’re still getting to know each other.”

However, she suspects that the would-be couple has what it takes to win over not only each other but viewers as well. “Historically, the most beloved relationships on Grey’s are the ones where the characters really challenge each other and push each other’s buttons, and they always come back to the love,” she suggested. “Those are the relationships that people are the most invested in. So if Jackson and Maggie can find a way to help each other be the best people and doctors and, in Jackson’s case, parent, I think the audience will root for them.” (With reporting by Jean Bentley)