A couple of ghosts from Mr. Robot seasons past reappeared this week, as Elliot and company dealt with the fallout from last week’s tragedy. 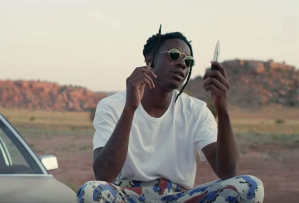 Hey, remember Trenton and Mobley? Those two fsociety hackers who ran away to Arizona last season, where Elliot’s old cellmate Leon found them? They’re still alive, but just barely: Leon cuts their roommate’s throat before driving them off to a remote, Breaking Bad-esque spot in the desert, where he has them dig a grave. (They try to escape, but Trenton can’t drive, and only manages to crash Leon’s Cadillac into a desert boulder.) The grave is just for their roommate, though. Leon brings them back to their apartment, where he says goodbye, leaving them in the hands of Dark Army henchmen. (Bye, Leon. We’ll miss your Seinfeld references.)

Back in New York, Dom and the FBI are watching another fsociety video that calls the 71 building explosions “a parlor trick” and warns of “a true act of sorcery” coming in the next 24 hours. They have Tyrell in custody, and his lawyer is eager to make a deal, offering to have Tyrell ID his Dark Army comrades. (He does ID two suspects we don’t see.) Dom still smells something fishy about all this, but Santiago firmly reminds her he’s in charge here. Then he goes into an interrogation room with Tyrell and coldly informs him his wife Joanna is dead and his baby son is in foster care, and will stay there if Tyrell dares to betray the Dark Army. Ouch.

As for Trenton and Mobley, Whiterose’s right-hand man leads them into a garage where computers have been set up with malware to take down air traffic control systems and other nasty schemes. A gun is placed in front of them, as they’re invited to commit suicide “in service of a higher power.” Later, FBI agents raid the building and find Trenton and Mobley’s dead bodies (each shot in the head), along with the computers, an Iranian flag and an fsociety mask. Basically, they’ve been set up to take the fall as the “leaders” of fsociety, with news reports blaring their faces all over the world — all in service of a higher power.

Santiago congratulates Dom, saying they “prevented another attack,” but she’s not satisfied: She goes back to her massive conspiracy board and crosses off Trenton and Mobley’s names… but adds a new space for “Whiterose,” as she marvels: “You’re actually gonna get away with this.” Yep, kind of looks that way, doesn’t it? 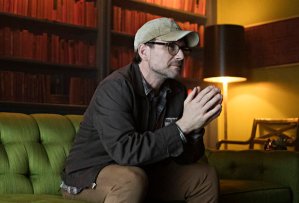 A ROBOT MALFUNCTIONS | Elliot is overwhelmed by guilt watching the footage of the E Corp buildings exploding on TV, so he runs to his therapist Krista for an emergency session. He tries to tell her what happened, but before he can, he glitches out, and Mr. Robot takes his place. He rants about how the Phillip Prices of the world have conspired to do all this to make themselves richer, and how he refuses to be their fall guy. (Yeah, Trenton and Mobley have taken that spot already.) Krista tries to tell him they’ve already caught the man responsible — Tyrell — but Robot lays out how he/Elliot was actually behind all of it… including the Five/Nine hack.

Determined to get some answers, Mr. Robot tracks Irving down at his car dealership, but Dark Army goons knock him out before he’s able to get anywhere. When he wakes up, he’s in a car with Irving, who points out people partying on a nearby rooftop. Thousands of people died today, Irving says, and those people are still partying; Mr. Robot’s so-called revolution is “bought and paid for by people like them.” And even though Irving is there to clean up the body of a dead mistress left in the bathroom — the party goes on. 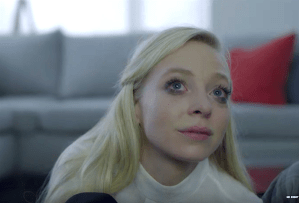 * Poor Angela was left catatonic by the explosions, flipping through TV coverage of the wreckage and babbling to Darlene: “They’re gonna be OK, right? All those people who died?” She’s still convinced all of the damage can be undone, rewinding the footage of a building collapsing on her DVR, as if that fixes it, and telling Darlene with eerie calm: “No matter what happens now, everything will be fine.” Yikes. Can we get her some of Elliot’s meds, stat?

* Phillip Price lashed out at Whiterose, wanting to know why she ordered the E Corp explosions. Whiterose reminded him of Angela’s crusade to sue the Washington Township power plant, which Phillip did nothing to stop. “I installed you as CEO only to protect my plant,” she told him, and he failed — so now she’s asking for his resignation.

* Leon’s pop-culture commentary was still hilariously on point, poking holes in the plausibility of Frasier (“Am I really supposed to believe a balding white dude from Seattle gets to smash that much?”) and singing the praises of Knight Rider. Also, kudos to the music supervisor for shelling out the necessary cash to play the classic Knight Rider theme song over the credits.

* Santiago may have shot himself in the foot, tipping off his Ensure-sipping mom about the attacks last week. Could her testimony end up bringing him, and the Dark Army, down?

* We barely saw Rami Malek this week, right? Elliot was there as the episode began, then it switched over to Mr. Robot/Christian Slater for the rest of the hour. Guess he deserves a holiday half-day.

* Did you hear Trenton say she scheduled an email to send itself if she didn’t make it home alive from the desert? Is that email still being sent… and who’s receiving it?