Elliot has a plan to thwart the Dark Army’s deadly plot this week on Mr. Robot — but is he already a few steps behind? 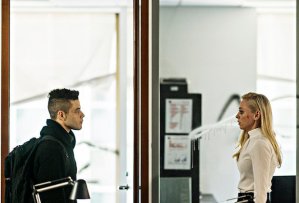 We pick up with Elliot confronting Angela about working with the Dark Army. She urges him to “let today happen,” convinced that Whiterose “is going to save the world.” Elliot says that’s all lies, calling Whiterose a terrorist, but Angela insists no one will die, “including your father and my mother.” (Again with the cryptic promises.) He gives up on her and rushes over to the E Corp data recovery building, where he hopes he can bypass what Angela did to the server and stop Stage 2 before the building blows up.

He sneaks inside by stealing a security guard’s badge and sets up shop in an empty conference room… but as he’s hacking away on his laptop, he glitches out, and suddenly he finds himself in a cab driving away. He checks the clock: He blacked out for 15 minutes. He gets back into the building, but again, he glitches out and ends up losing another five minutes. Basically, Mr. Robot is forcing a hostile takeover of Elliot’s consciousness — and he’s running out of time.

First, though, he manages to text Tyrell’s location to Darlene, who turns it over to Dom and the feds. It’s Irving’s favorite rib joint, Red Wheelbarrow BBQ, and Dom wants to raid the place, but her boss Santiago holds her back, saying they should just keep an eye on the place for now. And we know why: Santiago’s a Dark Army mole, and after Dom leaves, he texts to warn them Tyrell’s location is “burnt.” Word gets back to Whiterose, who’s enjoying a laugh with Phillip Price at a swanky party, but she says that doesn’t change anything: “You know what to do.” 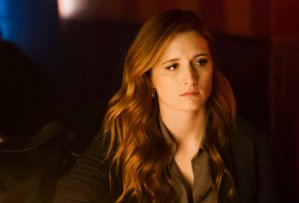 That leads to one of those great, tense Mr. Robot montages, with a lot of crazy crap happening all at once: While Elliot fights with himself (literally) on his way down to E Corp’s battery room, with Mr. Robot throwing him into walls and banging his head against pipes, Dom grabs lunch at Red Wheelbarrow, scoping out the place against Santiago’s wishes. And back in the underground lair, Tyrell screams at Irving after he find out his dream trip to the Ukraine is “not gonna work out.” Tyrell thinks Irving is about to kill him, but instead, he hands Tyrell an envelope of instructions and tells him to burn them when he’s done.

As Dom snoops around Red Wheelbarrow’s kitchen, she sees smoke coming from a back room. It’s Tyrell burning that envelope; that lair of his was behind the restaurant the whole time. Dom calls for backup and heads down a dark hallway, gun drawn, like Clarice tracking Buffalo Bill at the end of Silence of the Lambs, but she doesn’t shoot anyone. She just finds a secret passage inside a chimney Tyrell must’ve used to escape. Santiago, of course, scolds her for disobeying his orders and tells her to go back to the office. But on her way back, she sees a frantic Tyrell getting arrested and yelling, “You need to stop the attack!” She runs over and asks him: “What attack?”

Elliot’s busy trying to stop that attack, actually, but Mr. Robot keeps standing in his way. Finally, Elliot attempts to talk it out with his alter ego, showing him the shipping data he altered that proves E Corp’s paper records aren’t even in this building: “You got played.” A stunned Mr. Robot gives in and lets Elliot into the battery room, where he pulls the fire alarm and floods the servers with flame-retardant chemicals, preventing an explosion. Elliot slips outside undetected during the evacuation, clad in his signature black hoodie. So the good guys win, right? 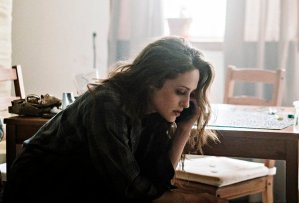 Uh, yeah, about that: Darlene confronts Angela about manipulating her brother, and threatens to turn her into the feds. Angela tells her to go ahead — “I know what I’m doing is right” — but they’re interrupted by an urgent alert on their phones. Phillip Price, too, rushes out of his swanky party. Elliot sees people in shock and finds a TV showing footage of a massive fire. The news is reporting 71 explosions at E Corp buildings across the country, with a death toll in the thousands. The Dark Army didn’t wait for the paper records to be stored in one building. Stage 2 just happened… and Elliot is the one who got played.

* We also got a flashback to Angela’s childhood, where Elliot’s dad tried to comfort her while she watched Back to the Future cartoons. Her mom, clearly very ill, told little Angela that she’s dying, but this isn’t goodbye: “I’m always gonna be there for you. No matter what.” And if Angela’s right about Whiterose’s plan, they’ll see each other again soon, right?

* While we’re on the subject: Will Angela’s faith in Whiterose and the Dark Army be shaken, now that she knows their promises of no one getting hurt were all lies?

* Some great physical acting from Rami Malek this week, throwing himself into walls and down stairs with abandon like that. He must be covered in bruises… unless they slipped a stuntman in there?

* I hope this doesn’t mean we’ve seen the last of Bobby Cannavale as Irving. He brought some much-needed levity to a very intense show. And we didn’t even get to hear his thoughts on Big Brother! (Oh, you know he has some.)