The Thinker is about to become Public Enemy No. 1 for “WestAllen” ‘shippers.

During this Tuesday’s The Flash (The CW, 8/7c), Barry’s fixation with stopping the Big Bad causes “a little bit of tension” between the speedster and his fiancée Iris, star Candice Patton shared during TVLine’s visit to the show’s Vancouver set. “Iris is going to be a little worried about how serious he’s taking this DeVoe character.”

When it comes to Team Flash’s Season 4 foe, “there’s a lot more than meets the eye with him,” the actress teased. “It kind of ends up driving Barry crazy, because he thinks he knows more about this guy, that he’s not all that he’s cracked up to be, or that he’s portraying himself to be. It pushes Barry to do some things that could possibly get him in trouble.”

And that behavior from her soon-to-be hubby is “troubling for Iris,” Patton added. “I think she thinks, ‘Barry, you’ve got to take a step back, or you could end up in a lot of trouble. You can’t go after people like that. There are laws and rules.'” 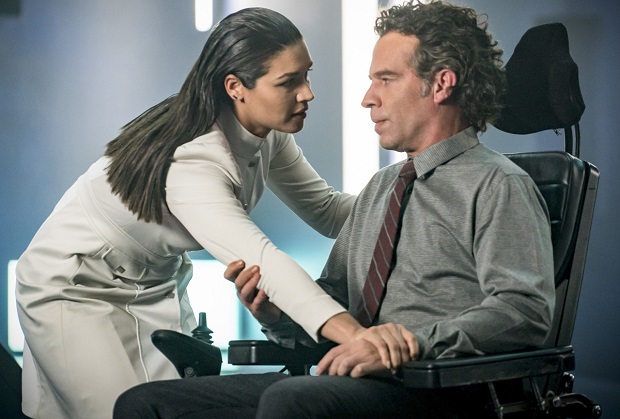 Barry, however, is determined to get ahead of The Thinker after he “starts to get an inkling, early, that this is going to be somebody serious,” leading man Grant Gustin previewed. While the gang “has their doubts” about Clifford DeVoe, the speedster “starts to – before anybody else on the team knows for sure that this is our guy – become a little bit obsessed with getting him, because he doesn’t want things to get out of hand again, as they always do.” That quest to get his friends and family “on the same page as him” will take its toll on Barry, who starts to “unravel slightly for the first time all season,” Gustin shared.

But while the titular hero is consumed with nipping this latest threat in the bud, “The Thinker is less about Barry and more about his vision of Central City, and how he thinks he can make it better and make the world better,” Gustin said. “He doesn’t really become obsessed with Barry and the team.” Nonetheless, DeVoe is very bad news for the Scarlet Speedster and company, with Gustin warning: “Things are going to take a dark turn quickly in the middle of the year.”