The Brave‘s fall finale Monday ended with Natacha Karam’s Sgt. Jasmine “Jaz” Khan singlehandedly killing a major bad guy — the mastermind of that beach attack from the premiere! — then almost making it to safety before getting nabbed by some of his thugs. As the NBC drama approaches its winter break, Jaz is out of contact with her team. Her life is in extreme danger.

So… are we terrible if we’re very interested to see not only what becomes of the stalwart sergeant, but also how one Cmdr. Adam Dalton handles Jaz’s newfound peril?

After a season that kept acknowledgement of any attraction between Dalton and the only female member of his squad to a single, downlow aside — remember Preach’s silent, knowing observation back at the camp? — we weren’t quite sure how to broach the subject of love in regard to the series.

But then Karam, reflecting on the events of Monday’s episode, went and did it for us.

“We don’t really talk about love in this show,” she said, choosing her words carefully as she adds that that may be about to change. “In Episode 10, someone may have lost someone they care about. Someone has gone. What are they going to do about it? How do they sleep at night?” 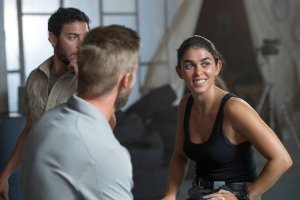 The members of Dalton’s team, she continued, continually put their lives in each other’s hands, and therefore have a very deep bond. “You can’t not love someone if you’re trusting them with your life. It’s a different kind of love,” she said.

To that end, when the drama returns, expect Preach, Amir, McG and Dalton to work overtime to get their comrade back from the men holding her… despite Deputy Director Campbell’s earlier warning that anyone left behind in Tehran if the mission went south would be on his or her own.

After all, Karam noted, in just about every episode, someone “colors outside the lines in order to get the mission done.” She laughed. “Just imagine what happens when it’s one of their own.”

And since Karam already brought up the L-word, how does she think that Dalton will deal with Jaz, specifically, being in danger?

“I’m going to tell you that he does not like Jaz going missing. His dark side comes out,” she previewed. “For the first time ever, at the end of [the fall finale], you see him not knowing what to do… In Episode 10, you see a much darker side to him.”

Now it’s your turn. Grade The Brave‘s Season 1 so far via the poll below, then hit the comments with your reactions to the fall finale and predictions for upcoming episodes!