During its four previous seasons, The Blacklist put Tom Keen through the physical and emotional wringer time and again — and he somehow survived all of it.

Getting tortured and stabbed in the pilot episode? No problem. Tied up and left to waste away on a boat in Season 2? Piece of cake. Chased by assassins at his own Season 3 wedding? Bring. It. On. (He even survived the cancellation of his spinoff series, which is perhaps the most impressive of all.)

But Tom’s spotless death-cheating track record was finally tarnished on the NBC drama’s Season 5 fall finale Wednesday: After getting entangled with a blacklister who was seeking the mysterious suitcase full of bones, Tom suffered injuries in a shoot-out that ultimately became fatal.

Earlier in the episode, Tom finally procured the DNA results of the bones, and although the home audience didn’t become privy to the information on that sheet of paper, the look on Tom’s face indicated it’s a really big deal. He called Liz — who had spent the entire episode trying to track her husband down — and assured her that when she got home that night, he would tell her everything he knew about the skeleton in Red’s suitcase.

But when Liz arrived back at their apartment, Tom had been tied up by Ian Garvey, the blacklister for whom this fall finale was named. There was chaos for a few moments: Tom was stabbed multiple times. Liz collapsed to the floor after one of Garvey’s men hit her, resulting in a sizable head injury of her own. Bullets flew. Fortunately, Red and Dembe burst through the apartment door before Garvey’s team could actually kill Tom or Liz — but the damage had already been done. The newlyweds had lost so much blood, and suffered such intense injuries, that they barely survived the car ride to the hospital — and once they reached the emergency room, Tom couldn’t be revived, despite the doctors’ many attempts with the defibrillator. (As for that flash-forward we saw in the Season 5 premiere? Total misdirect. Yes, Tom was lying on the floor, covered in blood, and yes, Red did shoot a gun in Tom’s general direction — but Red was actually killing one of Garvey’s men, not Liz’s husband.)

In the final minutes of the episode, Liz awoke in a hospital bed, intubated and disoriented. “How long?” she scribbled on a pad, showing it to Red, who was at her bedside. “Lizzy, it’s been almost a year,” Red revealed of her coma. “Ten months.” Liz’s next handwritten question: “Tom?”

And Red was then forced to give his daughter the bad news: Tom had died — and he wasn’t just saying that as part of an elaborate plan to mess with Liz’s mind. As Red revealed Tom’s fate to Liz, we watched as Harold Cooper paid a visit to the hospital’s morgue to see Tom’s corpse. The sheet covering his dead body was taken off, and after Cooper took a few moments to look at it, Tom was slid back into his refrigerated slot in the morgue’s wall. 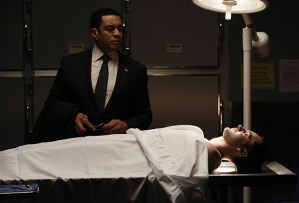 TVLine caught up with Blacklist creator Jon Bokenkamp to discuss Tom’s grisly demise, as well as what his death will mean for Liz when the series returns on Wednesday, Jan. 3, at 8/7c.

TVLINE | I have to ask, since we’ve seen a major death faked on The Blacklist before: Is Tom really dead?
[Laughs] He is dead. Yes, Tom is gone. He has met his maker.

TVLINE | Tell me how you came to the decision to kill him off in this episode. When did those conversations start in the writers’ room, and why was it creatively the best route to take at this point?
There was a number of reasons, but most importantly, it’s about the storytelling going forward and what his death means to Elizabeth Keen and how it impacts her. Can she move forward? Can she overcome this? What does it do to the task force? This presents so many interesting and complex questions. That’s why it felt like it needed to happen now.

TVLINE | What communication did you have with Ryan Eggold about Tom’s death? Did he find out before the rest of the cast?
Each season, we know fairly early [what’s going to happen]. We get together and talk for a month or so and talk about the big signposts that we want to hit within the season. And we thought this would be a great fall cliffhanger. So yes, we had conversations with Ryan fairly early about it. The rest of the cast probably found out as scripts came out. We didn’t openly talk about it, but we had conversations with Ryan about it…. I’m sad to lose Ryan on the show. He’s been a real critical ingredient to what The Blacklist is. We’re going to miss him, but we’re equally excited to explore some different stories that we haven’t had a chance to touch on yet. It’s bittersweet, but I’m excited about looking forward.

TVLINE | Is it possible that we’ll see Tom again via flashbacks?
We don’t anticipate that. I suppose that’s not outside the realm of possibility, if we wanted to bring back somebody like Mr. Kaplan or somebody that had been on the show. We did that with Sam Milhoan, Liz’s stepfather who died in the first season, and we brought him back in an episode. So I suppose that could happen, but we don’t have any plans to do that.

TVLINE | Back in the Season 5 premiere, we saw a flash-forward to tonight’s fall finale, which looked like Red would kill Tom but was ultimately a misdirect. Was there ever a version of that scene where Red really was the one to off Tom?
No, there wasn’t. Tom is like kryptonite to Red. Tom’s love for Liz has always been what’s kept him alive thus far. Red would have killed him in the first season if he hadn’t cared so much for Liz and if Liz hadn’t cared so much for him. So it was never our intent that Red would actually murder Tom. I don’t think he’d be forgiven for that, at least by Liz. What we wanted to do was indicate, back in that first episode, that even though it was a bit lighter and more fun this season because Red is rebuilding, it is still The Blacklist, and there are still dark things under the surface. That was just our way of indicating to the audience that something bad was going to happen. It was almost like a premonition that the walls of that apartment had. Something bad is going to happen. And we knew that by Episode 8, we would work up to that moment and see exactly what had unfolded. Hopefully it was a fun misdirect.

Also, there’s this great conflict between Tom and Red. The suitcase, all the baggage they have from the past — it all comes out in this season, and that was our way to acknowledge to the audience that something was off and someone would be on a collision course with disaster.

TVLINE | Speaking of that suitcase, this episode ends without revealing anything else about where those bones are, whose bones they are or the information that Tom got from those DNA results. Where will that storyline go when the show picks up in January?
When the show comes back, it’s a really, really unique, out-of-pattern, different episode. Things have really been blown up with Tom’s death, and Liz trying to figure out how to move forward is a story that we really dive right into. It’s like an episode we did called “Cape May,” and we did a flashback episode with Mr. Kaplan. This, like those, is one of those out-of-pattern episodes that promises to be super-emotional and raise some really great questions. It’s not a Case of the Week. It’s like an independent movie that we tell when we come back.

Regarding the suitcase, it is still out there. Reddington has no idea where it is. Elizabeth Keen doesn’t know about it. And Ian Garvey, played by Jonny Coyne, who is fantastic, is going to be a significant problem for Reddington. The shadow of Garvey and what he represents will be a really interesting big bad for the back half of the season.

TVLINE | When Liz wakes up from her coma at the end of the episode, Red tells her that she’s been out for 10 months. Is he telling her the truth?
Yes. Ten months have passed, and when we come back [in January], a little more time has passed. We come back in the future. So yes, that’s true, and she has a lot to overcome now. She’s completely checked out, her child is older, her mind and body have atrophied. We’ve got great obstacles for Liz to confront.

TVLINE | You mentioned earlier that Tom’s love for Liz was one of the only things keeping him from getting killed by Red. Now that Tom is gone, how will Liz and Red’s relationship be affected?
It’s going to confront both of them with some harsh truths, some of which have been ignored or side-stepped. Tom died in search of the truth of why Reddington came into Liz’s life, and he ultimately found, in that paperwork, answers that not many other people on the show understand. He obviously can’t move forward with those, and he can’t tell Liz what he found. But he had unlocked something massive, and the fact that Reddington was omitting that from what he had told Liz will be something they’re going to have to confront. Liz will have her own mourning process in trying to discover what she’s capable of moving forward.

They have to confront the idea that Liz is his daughter, and within her DNA is the possibility to do some incredibly dark things. That terrifies Reddington, and as much as he can see 10 minutes in the future, he’s genuinely concerned about what she might do. Liz is also super-aware of that. She doesn’t like the idea that her father is, in some ways, the devil. She wants nothing more than to be normal and have a normal life. And yet, she’s been sucked into this world that she’s having a hard time fighting back against. That, more than anything, will be something that Liz and Red will have to confront. It’s not only [about] why Tom died and who is behind his death and the more surface-level questions that we’ll confront about what really happened. But deeper than that, the bigger question is: Who is Elizabeth Keen?

With that, I hand it over to you. How do you feel about Tom’s death? Devastated? Thrilled? Completely neutral? Drop a comment below with your reaction to Wednesday’s fall finale.