Warning: The following post contains major spoilers for the Season 3 finale of The Blacklist. If you have yet to watch the episode, turn back now.

Step aside, Jon Snow. Your resurrection is yesterday’s news.

Confirming what many fans of The Blacklist have suspected since the pivotal April 14 episode, in which Liz Keen died from complications during childbirth, Thursday’s Season 3 finale revealed that Megan Boone’s protagonist is, in fact, alive — and Tom has been in on it the whole time.

Picking up where last week’s installment left off, the season ender found Red using every resource in his arsenal to track down and kill Alexander Kirk, the man responsible for ruining Liz and Tom’s wedding day, and subsequently ending Liz’s life.

But just as Red closed in on his longtime nemesis, Tom completely upended Red’s plan for revenge. With the help of Mr. Kaplan — who Red was devastated to learn had betrayed him — Tom and baby Agnes hopped on a plane to Cuba, where they met up with a very-much-alive Liz.

Of course, even when she’s hundreds of miles away from Red, Liz isn’t out of danger. (Is she ever?) In the episode’s final moments, Tom returned to Liz’s apartment, expecting to see his fiancée there… only to discover that she was gone, seemingly taken by force — a result of Alexander Kirk’s henchmen tailing Tom and Agnes all the way to Cuba. (D’oh!)

Meanwhile, Red and Mr. Kaplan boarded their own flight to Cuba — knowing full well that they’re working on borrowed time to rescue Tom, Liz and Agnes from Kirk’s clutches — which gave Red’s traitor an opportunity to explain the hows and whys of Liz’s faked death. But upon arriving at Liz’s home in Cuba, hoping to take down Kirk and his associates, Red and Mr. Kaplan discovered the same unfortunate scene that Tom saw earlier: broken glass everywhere, clear signs of struggle and all signs pointing to Liz’s abduction. (By that point, Tom and Agnes had also been taken by one of Kirk’s men, after he and Tom tussled in the apartment.)

The good news? Even though Red, Tom and Mr. Kaplan have no idea where Liz is, the home audience learned that (A) she’s alive, and (B) Kirk had taken her to an undisclosed location, where he dropped a major bombshell: Though he currently calls himself Alexander Kirk, his real name is Constantine Rostov — and he’s Liz’s father.

It should also be noted that, despite Liz’s mysterious whereabouts at the end of the finale, TVLine has confirmed that Boone will return as a series regular in the NBC drama’s fourth season this fall.

We’ll give all of that a second to sink in.

TVLine caught up with Ryan Eggold, the man behind Tom Keen, to unpack the eventful episodes that capped Season 3, especially the twisty season closer. Plus, Eggold dished as much as he could about the forthcoming Blacklist spinoff, Redemption — including a potential title change.

TVLINE | Walk me through what these last few episodes were like on your end. Were you told from the get-go that Liz’s death was faked, or was her death — and resurrection — something you only learned when reading the scripts?
The dissemination of information was very chaotic at first. [Laughs] I heard from Megan first. She came up to me and was like, “I’m dead.” And I said, “What?” and she said, “Yeah. I’m dead on the show.” And I basically said, “What? What are you talking about? We can’t do the show without you. There’s no way we’re going to kill you.” And then we got the scripts, and everybody was like, “What?! Is this real? Is this happening?” Of course, we all thought there was some way to turn it around.

The writers really didn’t want to tell us that she was going to come back, but I had so many questions, in terms of how to play certain scenes, and what knowledge I had and didn’t have. There were certain scenes that didn’t go far enough. I was like, “Jesus, if my wife just died, I would be more upset than this. I’d be breaking something or punching somebody or drinking myself into a stupor.” And finally, [series creator] Jon [Bokenkamp] was like, “All right, look, she’s not dead, man.” [Laughs] And he told me the plan and why Tom was underreacting, because he’s orchestrating this plan. And I was like, “Huzzah!” 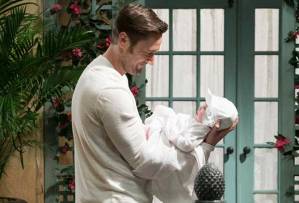 TVLINE | Had you suspected all along that she was going to come back, given Liz’s importance to the show?
Oh, yeah. Let me preface this statement by saying I’m glad Megan’s on the show, because the show revolves around her, and that’s what’s interesting about it. But it was interesting to remove the centerpiece from the show. You create this big, black hole, this void of where Liz was, and it pulls all the other characters closer to the center and stretches them in a way they wouldn’t have otherwise. Like, didn’t Aram and Samar share a joint in the car [during the funeral]? Things like that, you wouldn’t otherwise get unless you threw the show into chaos. I do like the tilt that it put on the show, but in the long term, The Blacklist without Megan — I don’t know what that is. I’m glad that she’s back.

TVLINE | And at the same time, you got to play Tom as an even bigger part of the story, especially with the introduction of Scottie.
Unrelated to Megan’s death, we were trying to introduce Famke [Janssen]’s character and start this spinoff. We wanted to create that world a little bit, and then we really explored it in last week’s episode, which was our pilot episode for the new series. That has been tremendously fun. I couldn’t be happier to work with Famke. She’s incredibly talented and wonderfully sweet and down-to-earth, and the ideas that we have for next year on the spinoff are really fun.

TVLINE | Let’s talk about the spinoff a little bit. At what point in the year did discussions for a spinoff begin, and when were you brought in as a potential star of that show?
You know, this Tom Keen spinoff thing was a whisper I heard a long time ago. I want to say end of Season 1 or beginning of Season 2 — I mean, a long time ago. And then it never really happened, so I just thought it was a rumor or a desire without anything behind it. And then about halfway through Season 3, it started to get very real. They started to say, “Let’s get a script, and let’s get serious about it.” And suddenly, there were ideas happening and casting decisions. And then I got the script, and I’ve really been pleasantly surprised at every turn. Not because I didn’t have faith in the writers, because they’re fantastic, but it’s hard to do a spinoff. It’s easy for it to either be a carbon copy or stale. But they’ve really done this great job of incorporating what’s wonderful about The Blacklist and adding a lot of new elements to make it its own show.

We’re going to get into this political bent. Scottie’s hiring spies like myself to influence governments, and [there are] empires rising and falling and the behind-the-scenes of that. I think that’s really timely, with Bernie Sanders and the concentration of wealth at the top, and corporations having all the power and influence on politics. If we get into a dramatized version of that world, where we are spies operating with those 1-percenters, that’s a really fun world that people want to see right now. 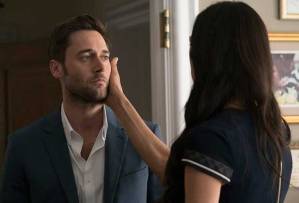 TVLINE | There’s already a huge difference between The Blacklist and The Blacklist: Redemption in that we already know Tom’s relationship to Scottie, and Liz and Red’s relationship is still very much a mystery. Have the producers filled you in on other distinctions, in terms of the tone of the spinoff and how it might be executed in a different way from the original series?
Yeah, they definitely have. It’s still early, and it’s still developing in that we’re discovering the tone as we go. When we saw the backdoor pilot, it was very educational for all of us to see what we had created. Once you actually see it, you can say, “Oh, here’s an idea — it should be this instead of this.”

TVLINE | In Seasons 2 and 3 of The Blacklist, we’ve learned bits and pieces about Tom’s childhood and his lack of real parents. Were you shocked to learn that Scottie was his mom, or did you anticipate that that might be their relationship?
For me, I really liked that difference between The Blacklist and the new Redemption series — that on Day 1, we answer it. We say, “This is their relationship.” And now the question becomes, “What is the past?” Tom was an orphan, and he was taken in from the streets and trained to be an assassin. So why did that happen, and how did he get there? And why did this woman give up on him or abandon him? Was she forced to? Why does she not know who he is now — or does she really? Is she pretending? When is Tom going to tell her what he knows? And then, of course, is she really his mother? Is that part of some elaborate game that Red is playing? That’s a lot of questions. [Laughs]

TVLINE | Aside from the spinoff, can we expect to see you in Season 4 of The Blacklist, given how this finale ends?
Yeah, Tom will definitely be in a number of the beginning episodes — or so I’m told — in Season 4. It will partly be to send us down the trajectory of this new series, and for the characters, we’ll find out what happens between Tom and Liz and what happens with this baby girl they both share. What is the future of that? We’re going to deal with that in the beginning of Season 4 and then make our way to a brand-new series.

TVLINE | Any parting thoughts?
Well, I want to say one thing, but I don’t want to get yelled at. [Laughs] It’s not an exciting secret. It’s… yeah. I want to take a poll. I want to ask the audience something. But I don’t know if I should.

TVLINE | I think you should go for it.
You know what? I’ll go for it. I just want to ask how people feel about the title — Redemption. Do they love it, or do they hate it? And if they hate it, give us a better one.

TVLINE | I’m definitely going to include this in our Q&A, and I have a feeling you’ll get so many responses.
We will get a ton of responses. I have no doubt. Just put a note saying, “Nothing offensive, and don’t hurt anyone’s feelings.” They can hurt my feelings but not other people’s. I don’t mind. I’ve got thick skin.

That’s a wrap on Season 3, Blacklist fans. What did you think of the finale? Grade it in our poll below, then hit the comments with all of your thoughts — including spinoff title suggestions!