Warning: This post contains major spoilers for the series finale of The Mindy Project.

So The Mindy Project‘s titular heroine got her man, her business and her happy ending, after all.

In the series finale, released Tuesday on Hulu, Mindy Kaling’s Dr. Lahiri reunited with former fiancé/baby daddy Danny, who also fronted the money that allowed her to keep her fertility clinic open. The financial backing was a surprise, but it was nowhere near as shocking as Dr. Castellano’s earnest admission that he’d been wrong seasons before, when he told Mindy that owning her own business would adversely affect their son’s upbringing.

And with that character hurdle cleared, it was only a matter of time before Beyoncé Pad Thai and Diamond Dan came to their senses and reunited romantically.

Mindy’s eureka moment came while giving a speech at Morgan and Tamra’s wedding, pointing out how much the bride and groom had changed over the years. “Maybe they weren’t right for each other then, but somehow they are now. That’s the thing about people changing. It happens so slowly,” she told the crowd. “You don’t realize a person’s changed until you look at them and they’re not the person you thought they were.” 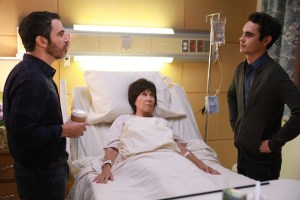 And after figuring out that she wanted to give it another try with Dr. C, Mindy raced (and, in a callback to the series premiere, biked) from the reception to the hospital where Annette was convalescing after a successful double mastectomy. But Danny didn’t recognize that his sweaty ex was making a grand romantic gesture until Ma and Richie pointed it out to him.

So Danny hurried after Mindy, finding her stuck with one arm in the vending machine in the doctors’ lounge. After he extracted her, things were a little awkward between the pair, until Mindy finally blurted out, “I wasn’t going to say that I loved you again. I was going to say that I never stopped loving you, and I don’t think I ever will.”

They kissed. They bickered. They sat on the couch and watched TV. And that’s how the ballad of Mindy and Danny came to its happy close.

In a moment, we’ll ask you to grade the series-ending episode. But first, we wanted to get star Chris Messina‘s take on Mindy and Danny’s rom-com ending — including Danny’s rather significant change of heart. Read on for Messina’s thoughts on his various comings and goings, the scene that made him (and Danny) sweat and the prop that became his go-to for getting into character.

TVLINE | You’ve said before how appreciative you are that the show allowed you to leave to do other jobs.
Very much, yes.

TVLINE | The double edge to that sword is that you played half of a very popular couple, and when Danny dropped out of the picture, you took a lot of heat from fans.
Yes. I got to feel both of those things. When things were right I felt the love, and when things were wrong I felt the disdain. But I totally get that, and appreciate it, only because it showed that people cared.

TVLINE | So whenever you weren’t around, it was for work? I know you have [HBO’s] Sharp Objects coming up.
Yes. Mindy [Kaling] was very cool about that. It was my fear going into a television show… My career’s always kind of in and out. A couple weeks here. A month there, and then be gone. She was very open in the beginning and just very cool about saying, “I want you to do other stuff. I want you to do movies and stuff. I don’t want to hold you back from doing that, but I want you to play this part.” And the writing was so good, and she’s so funny. It was really kind of a no-brainer. I couldn’t not do it, and I’m glad I did. It was an incredible time of my life. It’s like, look at her: She’s juggling millions of things, and so she understands when all of us had other interests. She totally was very cool about that.

TVLINE | In this last year, in your last big hurrah, did you have any hope or fear that they were going to ask you to dance again?
[Laughs]Yes. You know, I really ended up trusting everybody and all the writers. If they felt like the show or the character needed to dance, I would have danced. I’ve never really said no. There were episodes where I was triathalon-running, half naked and being carried by Ike [Barinholtz]. I did whatever they wanted me to do, because most of the time, they were right. It would work… I’m kind of glad they didn’t ask me to dance, just because I get nervous every time that would come up. But I would have done whatever they wanted. 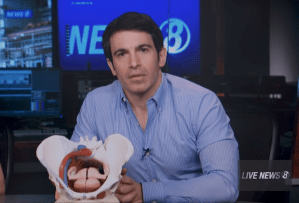 TVLINE | Along those lines, is there a Mindy scene that stands out in your memory as one that you were really nervous to do?
Yes. There was a scene early on where I was on the news for some reason. [Editor’s note: It was Season 1’s “Mindy’s Minute.”] And yes, I remember it being a very…it was extremely funny in the writing. It was kind of like an homage to Broadcast News when Albert Brooks starts melting in front of the camera, and I just remember thinking it was so funny and I remember wanting to deliver for them. I mean, this was a very frequent feeling that I had on the show, where it was written very funny and I wanted to mine as much of the comedy as I could for them and for the character. But that one, in particular, was maybe one of those first kind of big comedy moments they gave me.

TVLINE | I was so happy to see Danny’s red glasses front and center in the final few episodes.
I love those glasses. That was [supervising producer] Dave Stassen and Ike who, I think, invented those. I think it was an episode that they wrote. All of a sudden… it became something that I often asked for in scenes. “Should we have my glasses?” They just became a part of him. So, it’s great writing that invents these things and colors a character.

TVLINE | How much did you know about Danny’s change of heart ahead of this season?
Mindy’s always really great at kind of sharing, and also sometimes saying, “What do you think of this?” So, I pretty much knew where it was going, but maybe the fine line detail I didn’t know, the particular scenes… But I had a sense of where I was going, and I was excited. Did you see the last episode yet?

TVLINE | I have.
Were you satisfied?

TVLINE | I was happy they ended up together, but I haven’t liked the way Danny was written over the past couple of seasons. I didn’t love Danny’s hang-up about Mindy working, because that’s who she’s always been.
Yes. Definitely. Did you feel that you forgave him enough or got over it enough, or did you feel a little leftover anger?

TVLINE | No leftover anger. It felt a little rushed, but I understand why.
I understand completely. It’s rude and it’s from the dinosaur ages [for Danny] to behave like that to anybody, especially your loved one. But at the same time, I kind of thought it was something he would do, even though he was used to a certain Mindy and used to her a certain way, it felt right for the character and wrong — not what you wanted possibly as a fan of the show or something — but felt right.

I just hope that people will be able to forgive him for some really ignorant, stupid decisions along the way and know that in his core that there’s goodness.

TVLINE | Give me one that was on your list for her, and one that was on her list for you.
Okay, let me look it up. That Peter Weir film which was so good. Something Rock. So good. [Looks up film online] It’s such a great movie. I couldn’t believe I hadn’t seen it. It’s funny. It was Picnic at Hanging Rock by Peter Weir. It’s a 1975 film. Beautiful. She told me to watch that. There was several, but that one really struck me. And I wanted her to watch Straight Time with Dustin Hoffman. It’s one of my favorite Dustin Hoffman movies.

Grade the series finale via the poll below, then hit the comments with your thoughts!