The Country Music Association might have reversed its position on red carpet reporters asking political questions at Wednesday’s 51st Annual CMA Awards, but that didn’t stop hosts Brad Paisley and Carrie Underwood from mocking the “guidelines,” which the CMA hastily revoked after Paisley criticized them via Twitter earlier this week. 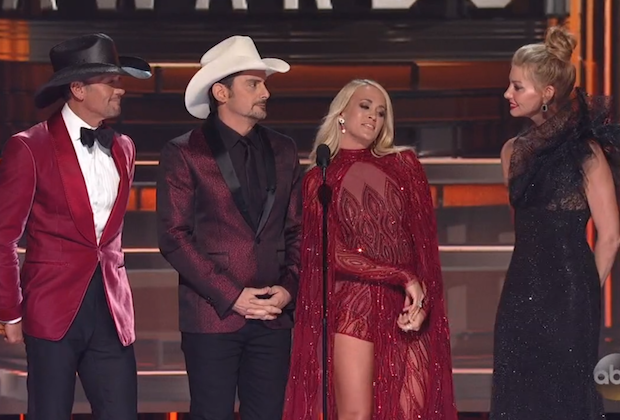 On the 10th (!) anniversary of their emcee gig, Paisley and Underwood continued their tradition of working current events into song parodies during the opening monologue. (Our favorite: a Donald Trump-related take on one of Underwood’s biggest hits, “Before He Tweets.”)

“We had an entire medley of Huey Lewis and the Fake News for you, but unfortunately, we couldn’t do that,” Paisley joked later in the broadcast.

But the evening wasn’t all yuks and yee-haws. After Eric Church’s somber rendition of “Amazing Grace” opened the show, Underwood remarked that the past year has been “marked by tragedy… so tonight, we’re going to do what families do: Come together, pray together, cry together and sing together, too.” Paisley later dedicated the show to “all those we’ve lost, and all those who are still healing,” and the In Memoriam segment — backed by Underwood’s vocals — paid tribute to the victims of the mass shooting at a Las Vegas country-music concert in October.

Click through the gallery above to see our picks for best and worst moments from the three-hour event, then hit the comments: What were your favorite (or least favorite) parts of this year’s CMAs?