“You married a wild spirit,” someone warns Queen Elizabeth in the Season 2 trailer for Netflix’s The Crown. “Trying to tame him is no use.”

And while Philip’s chafing at his official role does seem to take up a lot of his wife’s energies in the promo, released Monday, the queen has a bunch more problems — both foreign and domestic — to deal with in the upcoming second season. Per the official release, the new episodes will take place “as the fragile social order established after the Second World War breaks apart.”

Season 2 — Claire Foy’s last in the role before Broadchurch‘s Olivia Coleman takes over in Season 3 — will cover historical events such as Her Majesty’s Armed Forces becoming involved in an illegal war in Egypt and a scandal surrounding Prime Minister Harold Macmillan.

And from the looks of the trailer, Elizabeth’s family is going to provide plenty of drama inside Buckingham Palace, as well. Her sister, Margaret, declares herself a “modern woman” and does a whole lot of shimmying and sultry posing. The estranged Edward goads his niece, wondering who’s more harmful to the teetering monarchy, “me with my wilfilness or you lot with your inhumanity?”

Also spotted in the two-and-a-half-minute video: Quarry‘s Jodi Balfour as a visiting Jackie Kennedy and Downton Abbey‘s Matthew Goode as a society photographer who romances Margaret.

But back to Philip. Elizabeth warns someone — we don’t see who — near the end of the preview that “there is no possibility of my forgiving you… The question is: How on Earth can you forgive yourself?” Anyone else wanna wager that her hubby is on the receiving end of that chilly cutdown?

The Crown‘s second season will be available Friday, Dec. 8, on the streaming video service.

Press PLAY on the video above to watch the trailer, scroll down to see the official Season 2 poster (click on image to view in full), then hit the comments with your predictions for what’s ahead! 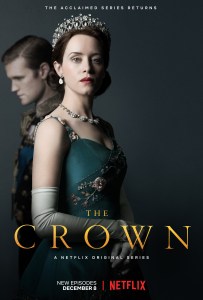