Warning: This post contains major spoilers for the latest episode of The Exorcist.

Just when you thought it wasn’t possible for Grace’s pillow mask to get any more unsettling, The Exorcist topped itself by having Andy’s dead wife, Nicole — or something that looked like her, at least — emerge from underneath the fabric at the end of Friday’s episode.

Yes, that was Alicia Witt (Nashville, Justified) as the dearly departed Mrs. Kim. And, as Season 2 star John Cho previews, the dead woman’s abrupt re-entry into the story is the catalyst for some really bad juju involving the kids, Rose, Tomas and Marcus.

The episode, “There but for the Grace of God, Go I,” offered some key intel about what’s going on in Andy’s foster home: The island on which the house sits has been the historical site of many family murder-suicides throughout history. But when Tomas approached Rose to offer his exorcism services, she pragmatically and promptly dismissed him. And Andy, whose grip on reality was slipping after Verity confronted him in Nicole’s old art studio, decided that he, the kids and Rose should go on an overnight camping trip (in order to get him away from an increasingly vindictive Grace.)

The demon or whatever it is presenting itself as Grace caused Truck to choke Verity. When Andy drove her home, he made a beeline for the studio, which he trashed. Nicole appeared to him in the wreckage.

Read on for Cho’s tantalizingly cryptic answers about what’s ahead on Fox’s supernatural drama.

TVLINE | Is little Grace gone? Is Nicole the new guise of the presence in the house?
I cannot reveal… well, screw it. You’ll see both of them.

TVLINE | The rock that Andy finds when he roughs up the art studio looked to me like it had something on it, maybe blood? Is that possible?
The rock is significant. There is a personal backstory to that rock.

TVLINE | Moving forward, how much would you say that Andy is in control of his thoughts and emotions?
The second half of the season, starting now, his life will become severely entropic. That’s a word, yes? [Laughs] So, things will not get good for him.

TVLINE | In your opinion, do you think having Rose around all the time is helpful or harmful to Andy?
I can clearly say that it’s both. 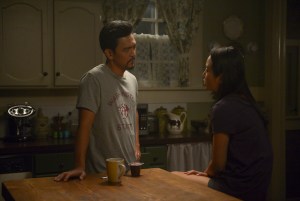 TVLINE | The Rose/Andy relationship feels precious, even though it’s far from the focus of the series or even Andy’s storyline.
I love that relationship. First of all, I love the idea of returning love. Not that they had a hot and heavy thing back in their past, but their history was very interesting.

TVLINE | Well, the affection seems very deep.
Yeah, it does seem deep like they have had feelings for each other. I was just watching Casablanca on the plane ride over here. I don’t know what it’s Rotten Tomatoes score is, but I thought it was good.

TVLINE | It’s so good.
But watching that movie, I was wondering why there isn’t a lot of second-shot-at-love stories in today’s cinema because it’s so effective. Because it feels even more precious when you get the second shot. Like, “How could this happen that we had it once and we had a chance?” you know what I mean. That idea is extremely interesting and effective.

TVLINE | Will we find out how long Andy has been seeing Grace? Like, has it been ever since Nicole died?
Yes, you will find out and it’s germane to… Yeah, it’s linked up to… [Pauses, smiles] Well, anyway.

TVLINE | I can’t imagine that having Nicole around will make Andy more grounded and centered. Does her presence rattle him even more?
It makes him extremely vulnerable to get his wish to have his wife back. There’s a bit of biting from the forbidden fruit.

TVLINE | It also makes me think that maybe then he will see Marcus and Tomas as antagonists, as opposed to helpers.
I think you’re right. In the next episode, Andy and the exorcists will butt heads. It’s a tremendous scene. I think it was nine pages long, which is a lot in a TV script, and we played it as one scene — like a play. It’s special doing that kind of scene with actors that are world-class actors. It was one of the delights of my life to do that kind of scene with those guys.

Have thoughts on this week’s The Exorcist? Hit the comments and let us know!