The Good Place wrapped up its fall run on Thursday with a TV sweeps staple — a wedding! — along with a gasp-worthy cliffhanger.

Janet is smitten with her brainless new boyfriend Derek — played by the always entertaining Jason Mantzoukas — and Michael worries that the dummy will blow their cover with Vicky. So he gets rid of Jason and Tahani by sending them off on a weekend getaway, and then runs to Eleanor and Chidi for help. Eleanor’s got her own problems, though: She keeps watching that VHS tape of her and Chidi in bed together professing their love for each other, and hasn’t told Chidi about it yet.

Michael delicately asks Chidi: “How do ethics professors feel about murder?” (“It’s frowned upon,” Chidi replies.) After summoning Janet and Derek to get Eleanor and Chidi up to speed, Michael suggests they might have to kill Derek to keep him from blabbing. (Michael’s pretty keen on killing, to be honest.) But Eleanor points out that having Derek around is keeping Janet from glitching out, so they agree on another, less murder-y plan: breaking up Jason and Tahani by telling her Jason was married to Janet in a previous reboot, which will render Derek irrelevant. 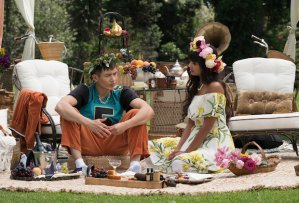 The happy couple is blissfully unaware of all that, busy making flower crowns and smashing Champagne glasses with croquet mallets. Tahani adores Jason’s childlike spirit, and impulsively, he asks her to marry him. She hesitates (understandably), but after he sweetly vows “to always be nice to you,” she actually says yes! They agree to get married later that day on the beach because, as Jason says, “the beach is where all the best stuff happens! Like swimsuit issues, and Saving Private Ryan, and Jersey Shore… and crabs!”

Janet and Derek aren’t so blissful, though: The next time Michael summons them, they’re bickering like an old married couple. When they stop yelling at each other, Derek runs off in a huff, and Michael panics. They find him sitting in a tree in the town square, introducing himself to various branches. Then Janet arrives with the news of Jason and Tahani’s impending nuptials. The gang rushes to the beach to stop them, and when Eleanor tells Tahani that Jason was married to Janet, Tahani collapses — onto a “dizzy couch” summoned by Janet, thankfully.

With the wedding called off, Janet is left to deal with her lingering feelings for Jason. Eleanor apologizes for giving her bad advice; she didn’t know how deep Janet’s feelings for Jason were. She offers Janet a shoulder to cry on, and a newly confident Janet packs Derek away in a steamer trunk and tosses him into a remote corner of her void. Plus, Jason and Tahani agree to get to know each other a little better before getting hitched. 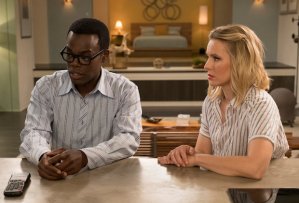 But there’s still more truth to be told: Eleanor shows Chidi the VHS tape, and neither of them can understand how they could say “I love you” to each other. She asks him if he has feelings for her, and seems relieved when he says no — but is she really all that relieved? She also helps Michael feel better about the long and painful ethical journey he’s on, but he might have something else long and painful in his immediate future: He returns to his office to find his boss Shawn waiting for him, who sternly says, “Shut the door. Have a seat.” Well… it was a nice scam while it lasted, huh?

* Tahani, excited to get out into nature: “All this time indoors has degraded my skin from radiant to merely dewy.”

* Janet, offering to make Eleanor a boyfriend: “Based on your last ten thousand comments, it would be Stone Cold Steve Austin’s head on Tahani’s body.” (Eleanor, excitedly: “Or vice-versa!”)

* Tahani teaching Jason how to play croquet, which “combines both the classic aspects of British sport: whimsy and restraint.”

* Jason, telling Tahani about his education: “I went to Lynyrd Skynyrd High School in northeast Jacksonville, which was really just a bunch of tugboats tied together… For most of my classes, we just sold dirty magazines door-to-door.”

* Jason’s wedding vows to Tahani, saying she’s taught him so much, like “why I shouldn’t eat everything that smells good… because sometimes, it’s candles!”

* Tahani’s vows, in which she calls Jason “a swamp dweller who once asked me if the presidents on Mount Rushmore have butts on the other side.”

* Janet, after Derek asks her what Jason has that he doesn’t: “A soul? And genitals?” Jason: “Oh, here we go with this whole no-genitals thing again. You’re the one who gave me wind chimes instead of a penis, Janet!”

* Jason telling Tahani that the first person he ever kissed was “the sexy mouse robot in the Chuck E. Cheese band.”

* Chidi, marveling at how in love with Eleanor he seems on that VHS tape: “I’ve never been that certain about anything. I once tried to rent socks.”

Got thoughts on this week’s Good Place fall finale? Drop ’em in a comment below.