We get to the bottom of Janet’s glitching this week on The Good Place, while Michael’s cold demon heart thaws ever so slightly.

Janet is glitching out and causing earthquakes all over town, so she and Michael retrieve her user’s manual — by yanking it out of Janet’s nostril — and flip through it looking for answers. Michael runs a battery of tests on her, and fears that the glitches might be because he lied to her, telling her he was a Good Place architect. But if that were true, she points out, she’d be glitching all along. 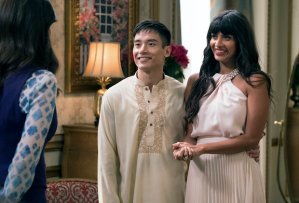 No, the real answer comes when Jason and Tahani waltz in, asking Janet to summon some jalapeño poppers for them. Janet says she’s happy to help, but then the room around them disappears, leaving them standing in a black, blank void. The room quickly comes back, and Michael shoos the new couple away, but he puts it together that Janet glitches out when she lies. And she’s lying when she says she’s happy to help Jason and Tahani, Michael concludes, “because you’re in love with Jason.”

Janet thinks that’s impossible — she wasn’t programmed to love! — but Michael theorizes that her ongoing affection for Jason must be a mutation caused by all the reboots. Janet slowly realizes he’s right, and has a solution: “I know what you have to do now: Kill me!” There’s a self-destruct option detailed in the manual (Michael has to touch her nose and insert a paper clip behind her ear), and she’ll shrink to the size of a marble for easy disposal. Janet is cheery about her imminent demise, as always… but Michael is reluctant to go through with it. 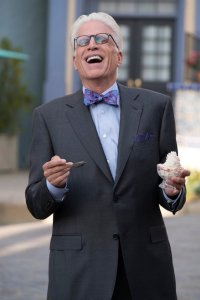 He tries to come up with an excuse for why he shouldn’t destroy her, and flashes back to his first day in the new town, when she gave him the brilliantly diabolical idea to make every restaurant in town a frozen-yogurt shop. Finally, out of reasons why he shouldn’t do it, Michael blurts out: “The reason is: friends!” He’s grown fond of Janet through all their adventures together, and can’t bear to see her turned into a marble.

So he turns to “our most problematic human” — Eleanor — for ideas. She sympathizes with Janet’s heartbreak, and suggests she just needs to “get drunk and go dancing” to get over Jason. (Janet can’t get drunk… but she does get pretty loopy if she stands next to powerful magnets.) Eleanor also recommends that Janet find herself a “rebound guy,” so when Janet returns from a brief trip to the void, she brings with her a new man: Derek, played by The League‘s Jason Mantzoukas. She created him to be her new boyfriend, but she’s not great at creating people yet, so Derek is a bit dim. He introduces himself to plants, he walks into mirrors… come to think of it, he’s a lot like Jason.

* Michael testing Janet by having her conjure up a random object: a 14-ounce ostrich steak impaled on a novelty pencil that says “Lordy, lordy, I’m over 40.”

* Jason’s reaction to the room around them disappearing due to Janet’s glitch: “Oh my God… we got robbed!”

* Janet informing Michael that, when she’s shrunk down to a marble, she can also be eaten as a snack: “I’m high in potassium… like a banana!”

* Chidi entering with a face full of acupuncture needles to complain about Vicky’s latest torture — but still in classic Chidi fashion: “I don’t want to be a noodge…”

* Michael: “What’s a food that people think they enjoy, but is actually kind of a bummer?” Janet, without hesitation: “Frozen yogurt.”

* Janet reporting back to Michael that Eleanor told her “to ‘go get it, girl.’ So I’m going to go get it, girl.” Michael: “Get what?” Janet: “Unclear. I’ll get everything, just to be safe.”

Got thoughts on Janet’s new boyfriend — and if she should eventually end up with Jason? Drop ’em in a comment below.