The Halloween candy may already be in the clearance aisle, but The Exorcist isn’t planning to stop spooking you anytime soon.

Exhibit A: After a break for the World Series last week, Fox’s supernatural drama is back Friday (9/8c) with an episode that picks up right after the previous one’s sinister reveal: Grace, the timid foster kid with whom John Cho‘s Andy has a special bond, doesn’t really exist. 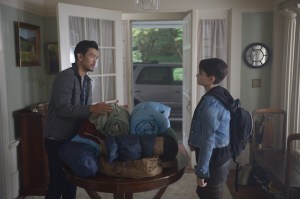 If you figured out the twist before it became abundantly clear, congrats — but Cho is convinced that knowing that type of info ahead of time won’t affect viewers’ enjoyment of the show. “I have this idea that a story just has to be good. You can know the ending,” he says during a visit to TVLine’s offices. “I read my children the same stories all the time, and everyone still seems to enjoy it, including me.”

In Friday’s hour, titled “There but for the Grace of God, Go I,” the demon messing with Andy and his wards finally makes itself known. And while Tomas and Marcus work to find some way to prove possession, and therefore start their real work, Andy begins to unravel in rather dramatic fashion.

“I think he’s struggling to understand why his wife is gone, and there is not a great answer. That’s really the issue with him: How could she have left? It can’t be just this,” Cho says.

We posit that if Andy believed that Grace was real, but she wasn’t, doesn’t it follow that perhaps other aspects of his life — including the circumstances under which his wife, Nikki, died — might also be different than viewers have been led to believe?

A cagey Cho replies, “I do think it relates in a way to the idea of evil, which the show maybe in one way is about: Why does evil exist? Maybe that’s what demons are about, an explanation for evil in general.”

No stranger to genre TV — Cho was one of the demon Moloch’s first unfortunate victims on Fox’s Sleepy Hollow — the actor says he was attracted to Exorcist‘s anthological nature. “I haven’t done a limited series before,” he says. “It’s very exciting to have it be more like a feature in the sense that you start somewhere and end up somewhere vastly different.

“And,” Cho adds, smiling as he notes that upcoming revelations were the “kicker” that sealed his interest in playing the tortured foster dad, “he is going to end up in a vastly different place.”