Thursday’s Grey’s Anatomy wasn’t just a biggie for Nathan and Megan, who began their new life together with Farouk in Malibu. It was also huge for Owen, who not only ended his marriage to Amelia but loosened his vise-like grip on his plans for the future. All of a sudden, he’s free — and so, in a way, is portrayer Kevin McKidd, who tells TVLine, “I’m having a lot of fun getting to play that side of Owen.

“He’s been very much wanting to have a wife and a child, and I think those are still desires of Owen’s,” he hastens to add. “But he’s realizing that sometimes if you hold onto something too tightly, then it slips through your fingers. I’m hoping [that going forward] he handles things more delicately and gets to enjoy moments in his life as opposed to constantly trying to chase that dream. Ironically, maybe when he lets go of trying to grip that so tightly [will be] when those dreams will become a reality.” 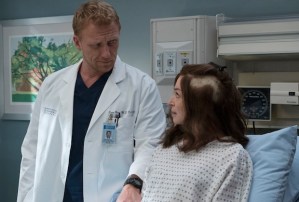 The actor even suggests that that could happen with Amelia — yes, the same Amelia with whom Owen just broke up. After all, she recently lost the tumor that had made her behavior so erratic, and he’s giving up his idea of how his life should play out. “It’s an interesting idea,” he says. They’re “two people who were in a marriage, and once this component that they didn’t even know about has been lifted, they get to press the reset button, and they both get to draw the picture of what their relationship is.

“There may be some moments that neither Amelia nor Owen expect” coming down the pike, he continues. “So there’s always a chance on our show. Anything can happen.”

What do you think? Would you like to see Owen and Amelia fall in love with the versions of each other that they are becoming? Or would you prefer they move on to new romances? Hit the comments.