As the first few minutes of Blindspot‘s season premiere unfolded on Friday night, you might have had to check your TV listings to make sure you were actually watching Blindspot.

Because the montage that ushered in Season 3 — a warm, colorful sequence that chronicled Jane and Weller’s wedding day, road trip to Colorado and subsequent home renovation — was so unlike the NBC drama, you couldn’t be faulted for thinking you were watching a different show.

Jane and Weller’s marriage was a particularly feel-good scene, which featured Patterson officiating the ceremony and the entire FBI team busting a move at the reception that followed. (Reade and Zapata ‘shippers were also gifted a brief shot of the duo sharing a slow dance.)

According to series creator and executive producer Martin Gero, a lot of time was invested in filming that montage, even though Jane and Weller’s relationship milestones only got a few minutes of screen time. 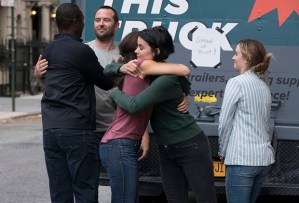 “It was a real joy. We took a whole day to shoot that wedding sequence, even though it lasts a minute-and-a-half on television,” Gero said. “It was really wonderful. It was the first day we didn’t actually record dialogue. It was just us hanging out with the cast — a great way to start the season and have a party with everyone we know and love.”

Actress Audrey Esparza, who plays Zapata, agreed that the wedding was “a change of pace” and “so much fun to shoot” for the cast. Added Reade portrayer Rob Brown, “It was cool to just film a wedding scene that completely has nothing to do with the case of the week or the tattoos.”

For Gero, kicking off Season 3 with such a joyous sequence was also strategic: The rest of the premiere is massively emotional for Jane, Weller and the gang, and “it was important to really fill up that love bank, because you have to hold on to that,” he said.

“To see everyone truly happy on this show, all at the same time, rarely happens,” Gero continued. “The rest of the episode is tough, and people are fighting. They’ve forgotten those moments. The episode is a bit like getting the band back together after they’ve reached their happiness peak.” (With reporting by Matt Webb Mitovich)

Did the opening sequence of Blindspot‘s premiere take you by surprise? What was your favorite scene? Drop all of your thoughts in a comment below!