When we last saw Blindspot‘s Jane Doe, she was all aglow — and not just because she’d recently been reunited with husband Kurt Weller.

No, she was literally glowing, and fans of the NBC drama were left to wonder for five months why Jane’s ink was lighting up, more than two years after she and the FBI took down Sandstorm. (The answer: Bioluminescent tattoos! Trippy!)

But, as evidenced by Friday’s Season 3 premiere, Jane isn’t the only one whose life has been upended in the last 24 months; the entire FBI team has also gone through major changes, all of which are visible without the help of ultraviolet light. First, a brief recap:

As series creator Martin Gero promised in our Fall TV Preview, the season opener’s first five minutes pack in a lot of information — and no one would blame you for thinking that NBC was mistakenly airing a rom-com in Blindspot‘s regular time slot. With the help of an upbeat, colorful, dialogue-less montage, we discover that Jane and Weller got married shortly after the Sandstorm debacle, before moving across the country to Colorado, where they spend their time renovating their new home and taking care of Allie and Weller’s baby daughter.

But when Jane is almost killed by a team of assassins in her house one night, CIA Deputy Director Jake Keaton informs her that a massive bounty has been put on her head by a former Sandstorm loyalist. Thanks to the dark web, dozens of the world’s best hitmen are looking to off Jane, in exchange for millions of dollars. Jane’s only option is to assume a new identity and start fresh with an entirely different life somewhere else — and even though Weller promises to join her on this new path, she tearfully flees in the middle of the night, while Weller is asleep, knowing she has to go it alone.

You already know what happens next: In the same scene that closed out Season 2, Weller finds Jane in Nepal 18 months later, they uncover Jane’s bioluminescent tattoos, yadda yadda yadda. Though Weller is initially puzzled as to how someone could have mapped his wife’s body with this UV ink, Jane remembers a crucial detail: She was in an accident a few months back, leading her to go in and out of consciousness for days. Whomever caused that accident must also have covered her in the new tats while she was unconscious — and the first tattoo, a quote from Dante’s Inferno, leads Jane and Weller back to Venice, the site of their engagement. 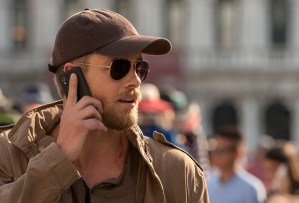 I’ll spare you the minutiae of their trip to Italy, but here’s the major takeaway: Roman, who we last saw running away from Jane after she refused to kill him in May’s finale, gives his sister a call to reveal that he’s the one to blame for her fresh ink. What’s more, he’s going to get that bounty off Jane’s head by helping her fake her own death, but only so he can fully dedicate his time to getting revenge on his sibling for abandoning him two-and-a-half years ago. Turns out, those bioluminescent tattoos represent months and months of pain on the horizon for Jane and her loved ones, and Roman is “going to enjoy every minute of watching [Jane] suffer.” (If you thought your family had its emotional baggage, take solace in whatever dysfunctional relationship these two have.)

After Jane and Weller escape Venice, with Jane’s head officially bounty-less, they head to Venezuela, where Reade, Zapata and Patterson are being held hostage by the government until they can hack an important-looking central processing unit. Jane and Weller get the trio to safety in the nick of time, but it’s clear that things have changed for the FBI team: Reade is now heading up the bureau’s New York office, Zapata has since transferred to the CIA and Patterson has been developing an app in Silicon Valley. Their dynamic isn’t the same as it once was — but given Roman’s threats to Jane, and her latest tattoos, all of them decide to team up once again to investigate Jane’s ink and neutralize her brother. Jane and Weller move back to New York; the FBI and CIA, much to each organization’s chagrin, decide to work together for the Jane Doe Task Force 2.0; and, perhaps strangest of all, Rich Dotcom is somehow working for the FBI. (?!)

On the heels of this jam-packed hour, TVLine caught up with the Blindspot cast and creator, who answered all of our lingering questions about the season opener.

ARE WELLER AND JANE GOING TO BE OK? | After relocating to New York and settling in for their return to crime-solving, Jane and Weller seem to go back to their pre-Nepal marital bliss… until Jane confesses to her husband(-ish?) that she’s learned a lot in the last two years, including how to live a life without Weller. Once they got to Colorado, Jane had realized she didn’t have an identity outside of her marriage, and she found one during those two years she spent MIA.

But if you’re worried that #Jeller is in danger, don’t be. According to star Jaimie Alexander, “Weller and Jane have such an incredible bond that he’s supportive” of Jane taking time to find herself, even if that means refraining from immediately wearing her wedding band again. “He’s scared, but supportive,” she said. “There’s a freedom there, but there’s also this thing where Jane’s going, ‘Oh, gosh, I’ve been myself for two years without you. I’ve missed you, I’ve loved you, but I’ve also had this life without you for two years, and here we are, back together.’ And that’s always a scary thing, because she found that she can exist without him.”

That said, even though Jane and Weller will be stable for the time being, Jane is already hiding something from her beau: a stack of passports and cash that she’s stashing in an air vent at Weller’s apartment. Alexander said that viewers will soon learn where Jane got all that paper, revealing that Jane “had to make money somehow [while on the run], and she did it respectfully in doing kidnap-and-ransom missions — so she saved people. But with that, she has to have multiple identities. She has money from all over the world she’s saved up, she’s got all these passports that she would never, ever use to do something negative. But she still feels the need to hide that at the beginning because she’s been a different person for two years. She’s been herself for two years, with no one’s influence but hers.”

WHAT HAPPENED IN BERLIN? | At the end of the hour, Weller leaves his apartment to grab some food for him and Jane… and he’s approached on the street by none other than Roman. Though Roman won’t elaborate much, he tells Weller that he needs a favor regarding Jane’s new tattoos. And Weller can’t exactly refuse to help, because if he does? Roman will tell Jane “what happened in Berlin.”

Added Gero: “Roman has something on Weller that will be, both emotionally and plot-wise, so explosive that Weller’s the only person he could go after with this kind of information. It’s huge. You have to pitch these shows to get the next season, and when I pitched what Berlin was, people literally gasped in the room. I was like, ‘Oh, we’re a shoo-in. We’re for sure going to get a third season.'” 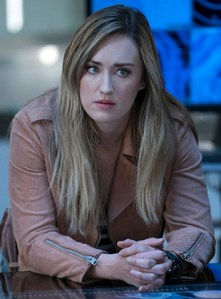 SERIOUSLY, WHAT IS RICH DOTCOM DOING AT THE FBI? | At some point during that two-year time jump, Rich Dotcom helped the FBI take down baddies, and now that he’s on probation, he’s been brought on as Patterson’s kinda-sorta replacement. “They all have to learn how to trust the man who lured an international assassin to their door, manipulated them for their protection, escaped a sting operation and, in general, has proven himself willing to do anything to get out of situations,” said Ennis Esmer, the man behind Rich Dotcom. “It’s a reconciliation of how Rich used to be versus how he is now. He sees the merits in doing some good in the world.”

And there’s one person on the task force who’s already formed a history with Rich in the last two years: Patterson. Though she initially pretends to be shocked and appalled that Rich is working for the FBI, we find at the end of the hour that she and Rich have been seeing each other in some capacity, for an undisclosed amount of time.

“You learn what their relationship is very early on,” Ashley Johnson teased. “‘Relationship’ can mean lots of things. They definitely have a very interesting connection that you will find out.”

And even though Rich and Patterson seem like the ultimate odd couple, Esmer is confident they’re not as different as they seem. “They’re both tech-savvy, they’re both capable in the same worlds. The Venn diagram of their skill set has a lot more overlap than people have seen up to this point,” he said. “That’s definitely going to fuel their relationship. But it is a bit like oil and water, too.”

WHAT’S UP WITH THAT DRAGONFLY TATTOO? | After the FBI and CIA decide to team up for the new-and-improved task force, Zapata approaches her boss, Keaton, with a worried look on her face. “You see this yet?” she asks, showing him a scan of one of Jane’s new tattoos: a dragonfly. “Is this gonna be a problem?” Keaton inquires, to which Zapata replies, “No. Not if they don’t find out.”

Though Audrey Esparza couldn’t tell us much about what that dragonfly means, she could reveal that the tattoo “is actually a huge thing this season. The audience will be surprised, shocked, maybe even horrified by what it leads to.” (With reporting by Matt Webb Mitovich)

With that, I turn it over to you. What did you think of Blindspot‘s Season 3 debut? Grade the premiere in our poll below, then hit the comments to back up your choice!