When young, traumatized newbie prostitute Bernice had a minor breakdown at the end of Sunday’s The Deuce, her “massage parlor” co-worker Darlene merely stood by and watched. But Darlene’s actions were less callous disregard, more self-preservation, her portrayer tells TVLine.

Memories From the Set: Dominique Fishback 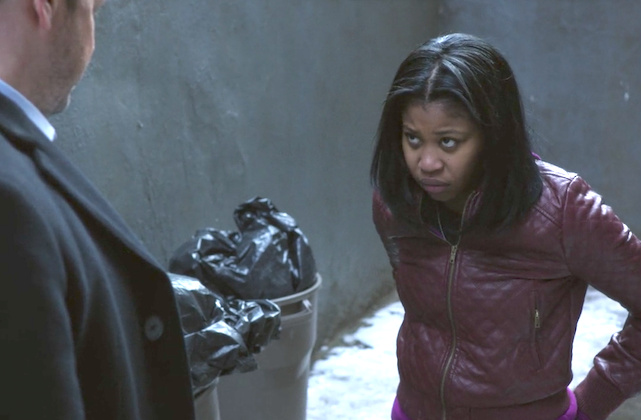 “She’s super young, and she’s learning as she goes,” Dominique Fishback says. “She’s trying to get a harder exterior, because she realized that her emotions have not gotten her places. If she’s going to survive, then she can’t really let Bernice’s experiences make her feel responsible” — despite the fact that Darlene made her life and job in New York sound so glamorous during a trip home down South, Bernice couldn’t help but want that for herself.

She adds: “She never realized the effect that [the life] could have on somebody who’s just not built for it.”

As the critically acclaimed HBO series heads into its first season finale (Sunday, 9/8c), Maggie Gyllenhaal’s Candy is finding her niche as a nascent auteur in the adult-film biz. We wondered if Darlene might follow suit.

Ahead of the season-ender, we asked Fishback — who’ll soon be seen in the big-screen adaptation of Angie Thomas’ The Hate U Give — to reminisce about her budding (yet impressive) small-screen career. Read on to hear her memories of stints in The Knick, Royal Pains, Blue Bloods and more. Click through the gallery above to hear her thoughts.